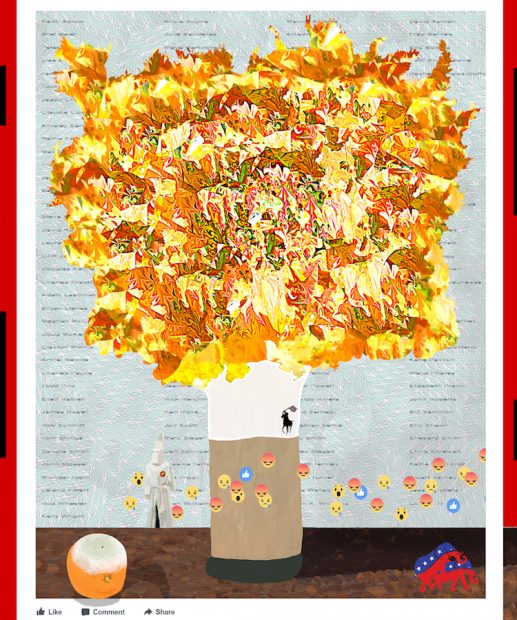 CO-OPt: Research + Projects, a new artist-run gallery and studio in Lubbock, currently hosts Flowers for donald and Countries Glorious by artist Gregory Eddi Jones. It’s a photography/digital painting show coupled with a book by the same name. Jones is a Philadelphia author and artist, and the founding editor of In the In-Between: Journal of New and New Media Photography. With this show, Jones won the 2018-2019 FOAM Talent award, and the work has traveled to Amsterdam, New York, London, and Frankfurt. Now: Lubbock.

To be honest, I’m not usually a fan of digital painting, though I love painters who use digital references — Laura Owens, Katherine Bernhardt, and Shawn Huckins come to mind. Jones gives us a pastiche of photoshop, bits and pieces of news, the internet, Western European painting, and domestic scenes. But Jones’s digital paintings hold so true to the immediacy of painting; they have a slapstick, cut-and-paste fresh quality coupled with moments that are labored over and finessed. In short, they’re really good.

These images, and their ritual creation, are small memorials: each day’s depressing news cycle compressed into an act of near-devotion. They ride the same edge as Andres Serrano’s Piss Christ — pieces riddled with disdain, but also the intimacy of a very personal, private act. It reminds me of something sincere that my mom says: “When someone is your enemy, pray for them.” These digital paintings are less prayers and more ruminating, boiling talismans. Still, there is the strange tie Jones has to Trump through making this series — an obsessiveness. (The media shares and perpetuates this obsession through continual coverage of the dumpster fire in a power suit.) It’s hard to look away, and I’m not so sure we should. 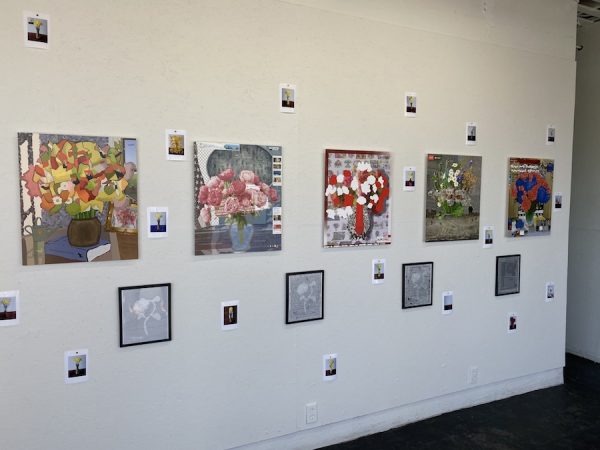 A subtle but effective part of the show are the near-Polaroid-formatted daffodils that pepper the walls in a checkerboard pattern. These call back to vanitas paintings — to depictions of seasonal and cyclical beings. We have a cultivated tenderness toward flowers, no matter the someday-we-will-die connotation of cut blooms. The repeated daffodil images expedite the life-cycle through clunky filters and edits, sometimes as simple as a monochrome filter, and other times appearing to be burnt, dissolving, or exploding into multiples. The repetition in this series relates heavily to the 24-hour news cycle. Here, Jones pulls from hardly any symbols and cultural touchstones (such as the teeny confederate monument that appears in Flowers for donald #23 (reactions [with racism])), and in doing so, through contrast, strengthens the tightly packed larger works. 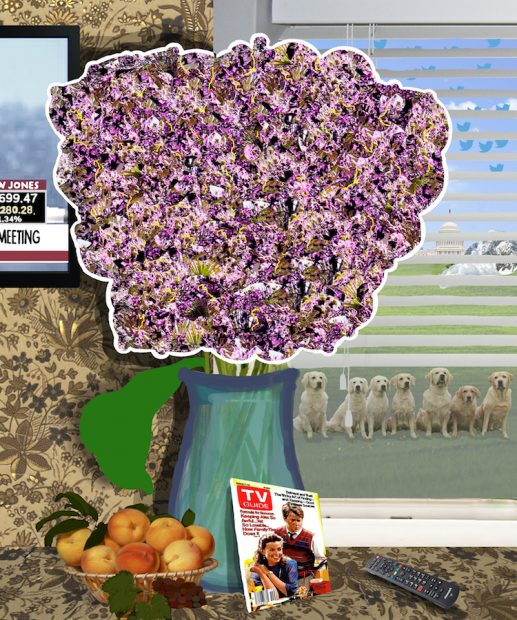 The piece that sums it up for me sets a vase of frenetic purple flowers on a wallpaper (or vinyl tablecloth) interior, with window blinds pulled up part way to reveal a string of dogs. The dogs give way to the White House in the background; a flock of twitter icons flutter by. It drives home the idea of an insulated and isolated observer, behind windows or smart-phone screens, weighing in and weighed down by each new headline. There is an absurd privacy to social media — or as Colin Quinn states in Red State Blue State about the way it once was: “If you wanted to fight about politics, you’d have to get dressed, leave your house, got to the bar, pick up a newspaper and find someone who disagreed with you.” The quality of communication of a devoted observer and ritual commentator (for Jones through art, for the rest of us through social media and news cycles) is complicated. The tangential themes that crop up through Flowers for donald range from absurd to painful: the loss of expertise and slow journalism, the rise of “sensitivity,” semiotics, social-media discourse, meme culture, public and private life, and the overlap of the personal and the political. It’s loaded, heavy work, set to the tune of seemingly trite floral arrangements.

‘Flowers for donald and Countries Glorious’ is on view at CO-OPt in Lubbock through December 7th, 2019, on Fridays from 10 am-1 pm and by appointment. CO-OPt Research + Projects is an artist-run studio space and gallery located in Lubbock, Texas, founded in 2019 by J. Eric Simpson, Cody Arnall, Lindsey Maestri, Aaron Hegert, Natalie Hegert, Andrew Weathers, Gretchen Korsmo, Heather Warren-Crow and Seth Warren-Crow. The gallery features curated exhibitions of contemporary art, a reading library of artist books and zines, and special programming of artist talks, performances, and experimental music shows. CO-OPt also functions as a working artist studio where the artists J. Eric Simpson, Cody Arnall, and Aaron Hegert center their research and practice.