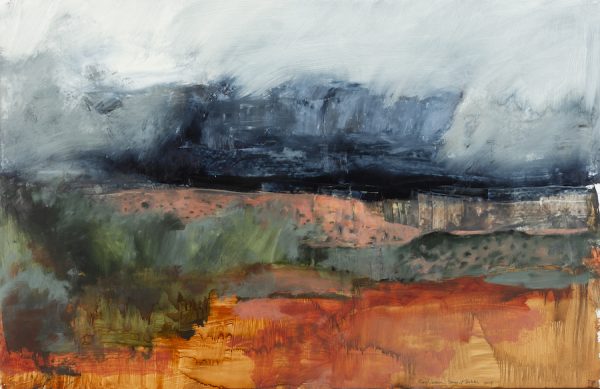 Three leading Dallas artists, Barnaby Fitzgerald, Lin Medlin, and Mary Vernon, have put together at the Bath House (that innovative multi-artform venue in Dallas) a show that is shockingly beautiful. Shocking because it is beautiful in this time when beauty is almost forbidden, lest we forget our savage political responsibilities or fail to paint our ecological catastrophes. But perhaps beauty is the only consolation, and consolation is the alternative to suicide. And if we cannot love our planet, why should we try to save it?

Shocking also because it is a conversation among not only the three artists themselves but also with the great host of dead artists and poets who so inform their work. There is no competitive striving for fashionable originality, but for what arises out of the ancient shared search for truth. And it’s a conversation largely about clouds. 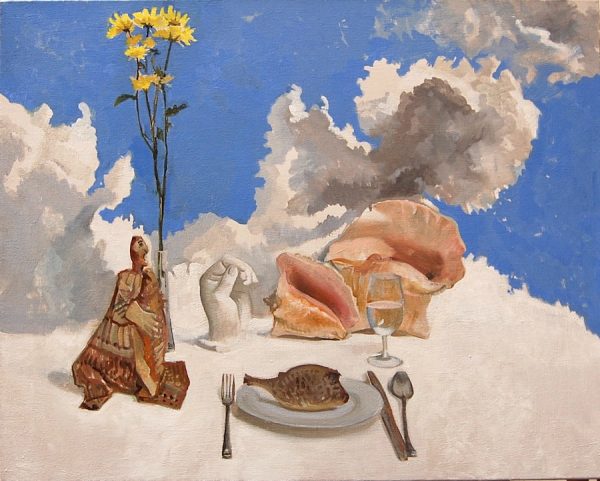 Fitzgerald has been obsessed with clouds for a long time, as Leonardo obviously was in his many sketches of turbulent flow in water and wind. What does stuff do when it can take its own form, entirely loose to change and free to respond to every gust, every alteration of temperature and moisture, constrained only by its own viscosity? A cloud is what it is. 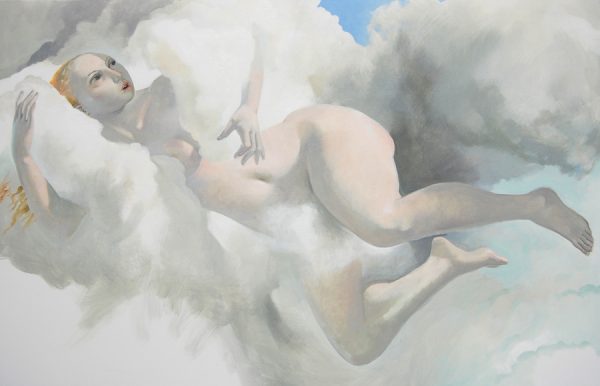 Now Fitzgerald’s obsession has found mythical form in the story of the princess Io. Io was raptured into the divine realm by her lover Zeus in the form of a cloud. The transition from a purely physical exploration of matter to mythic story is chronicled in his Apparecchiatura, where the cloudscape of a previous painting, Seduction, is now a tablecloth laden with a collection of more enduring shapes, themselves the results of slower but analogous self-organizing processes. The conch shells, of course — a favorite of his — but also a pufferfish comically presented on a plate, with the same cusp-like curl of his forehead as in the cloud; a curled up sculpted hand (the artist) with the same wave-curl; a marionette of an oral epic poet, with an analogous shape, and a flower, which, as Goethe recognized, is the result of an unfolding nonlinear dynamical process. We see the associative mind at work: the cloud shapes have flowered in the solidity of living water-creatures and a poet’s story of gods. 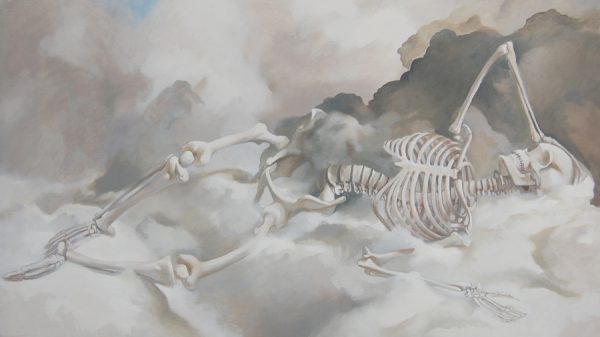 And a new personality emerges in Fitzgerald’s rapturously beautiful Io nudes. The Transfiction of Io is a moment of mystical rapture in which the soul captured by a god is fully aware of what has taken her, fully self-reflective, echoing such stories as Leda and the Swan, Radha and Krishna, and the Christian Annunciation. Io is mortal, as Fitzgerald insists with his grand image of her skeleton in the same pose in the clouds as in her transfiguration. Her mystical rapture is a rapture of time and flesh, not of a timeless eternity. But caught at a moment. 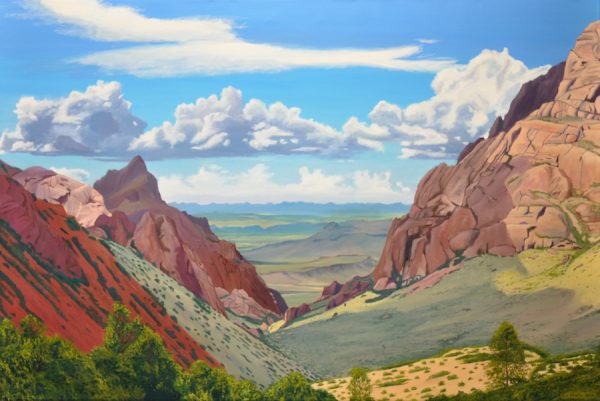 All but one of Lin Medlin’s landscapes are also cloudscapes. The land under them comes alive, glowing here and there — or falling into mystery — as the endless flow of cloud reveals or hides them. If you want to paint a process, rather than a fixed thing, you must somehow paradoxically stop time. Anyone who has painted en plein air knows the extreme frustration of the effect you are trying to catch disappearing before you can get it all on the paper or canvas, or worse, you end up with a sort of average of those few minutes, an average that has no life. So Medlin traps the moment in a photograph. You have honestly what that very moment looked like. But now the photo doesn’t move. So painting must somehow put back the motion that which was lost. 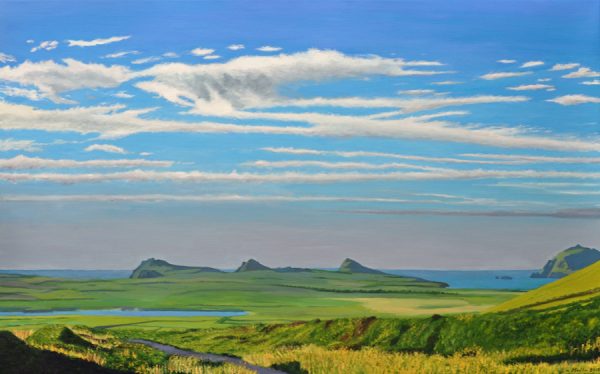 Medlin does this in his gorgeous landscapes of the American and Irish West — as I take it — primarily by means of color. An unartistic eye sees things as literally brown or yellow or blue, when actually they are, as the Impressionists noted, a superimposition (not a mixture!) of many colors. Medlin’s eye remembers colors in a remarkable way. So he largely ignores the explicit color of the sagebrush or mountainside or island, and brings out the passionate blue or gold or pink that the world is speaking through the veil of its appearance. As a child’s pop-up storybook suddenly turns a two-dimensional picture into a three-dimensional one, Medlin uses color to turn a cunningly managed three-dimensional still scene into a four-dimensional one, recovering a temporal dimension discarded by the photograph. It’s the degree to which Medlin’s landscapes are brighter than the real thing, to that extent they move — and we instinctively grasp this. 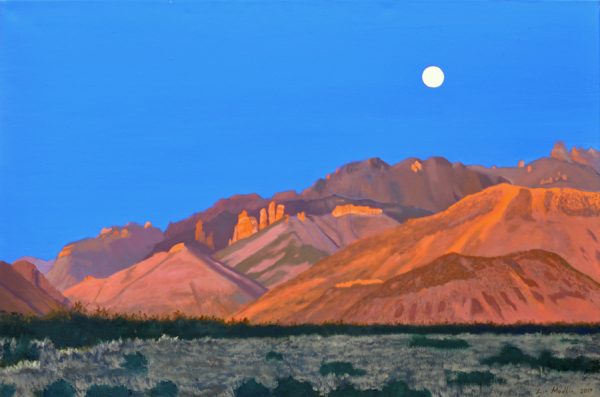 In the one painting of his with no cloud, it is the moonrise that is the motion indicated by the over-blush of the colors. In a nounless language invented by J.L. Borges, “It mooned.” 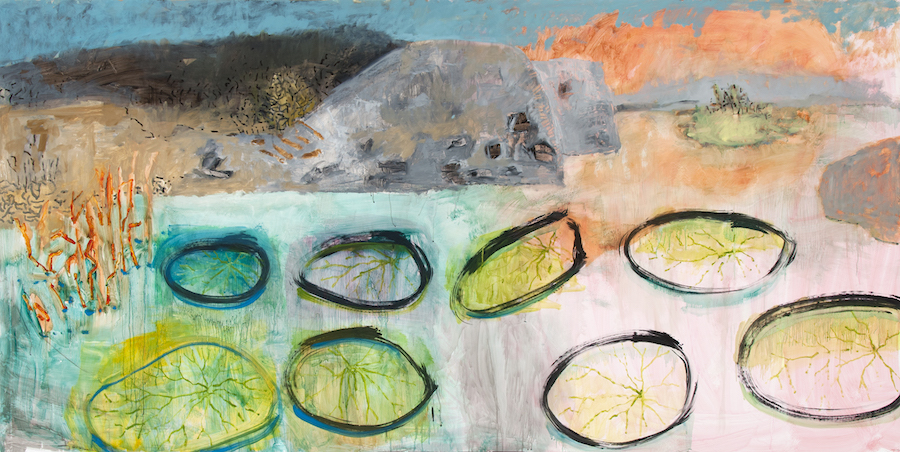 Mary Vernon knows how to exploit her own virtuosity, and has another approach to her clouds, liquids and other dynamical processes. She slaps the paint around so cunningly that almost, as it were by coincidence, the brushstrokes with great evocative power seem to exactly represent the scene. After all, her own body is a dynamical process, and her mind, apparently effortlessly, appears on the surface she paints. So the scene is raw, like our first impression of something quite unfamiliar, and the picture takes us through the process of recognition.

Vernon’s earlier work was often on a small scale, bringing out the fantastic quirkiness of a backyard or an interior as seen by her own very powerful and odd intelligence. But now, suddenly, she is composing on an epic scale. Her landscapes are enormous, often using a surface much longer than it is high, with grand meteorological or apocalyptic events moving in the heavens. A world of adventure — her Wushan, the Yangtze in its immense troubled force driving through the mountains, the frail orange bridge the engineers built over it far off near the vanishing point — has the vastness  of the old Tang poems, like this one by Wang Wei (701-761 C.E.):

The Han River Seen From A High Vantage Point

The three Xiang forks join at the Chu frontier,

Through the Jin Gate nine streams pour to the sea;

The river flows far beyond earth and heaven,

The mountains seem to be and not to be;

Cities and realms float by the riverside,

Vernon carries her sense of the vastness of time and space back to the US with her grand landscapes of storm and wind in the American West; her hand and arm enact the changing moment of these open worlds. 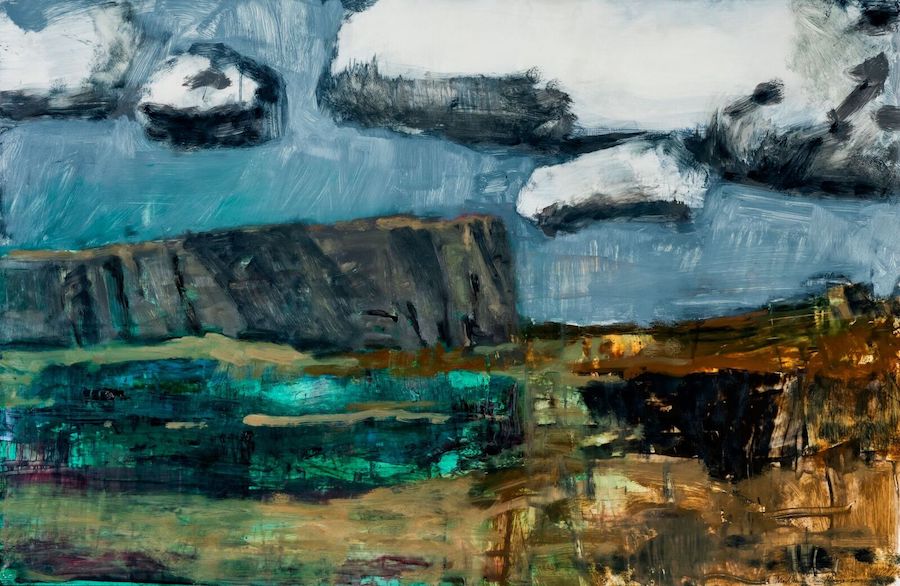 In taking up the ancient problem of representing the vitality of time in an unchanging medium, with three distinct solutions, these three artists seem to be voting for hope, for a life of meaning beyond the current atmosphere of death spiral.

On view through Sept. 28 at Bath House Cultural Center, Dallas

Thank you, Frederick, for your beautiful and insightful article about the Conversation: Landscape Paintings as Movement at Rest exhibition, currently on display at our center. It is truly a joy and a privilege to have the opportunity to exhibit the works of these three influential artists and to be able to collaborate with Valley House Gallery.

How often my dear friend and fellow artist Tom Motley and I have lamented the absence of beauty in the contemporary art world. Oh how we have yearned for a show like this…thank you.