The Life We Live Here: Bob Schneider at Redbud Gallery 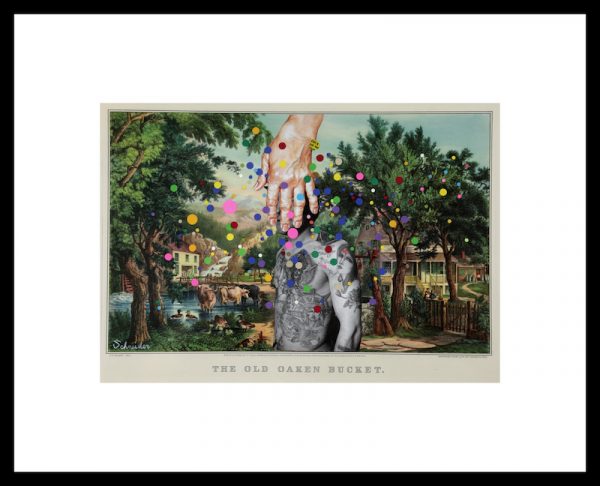 Bob Schneider, an Austin-based musician, is also a pretty great visual artist. His solo show, The Life We Live Here, opened January 4th at Redbud Gallery in Houston. It’s a small show of collages set against an intensely red wall in a space with storefront windows, and each piece is presented with a generous white mat and a thin black frame. I viewed everything online before the show, but the work carries much more heart and presence in person (as I’d guessed it would): a dab of glue peeking out here, a dull color that really pushes forward there. Unlike his earlier, packed-in figurative collages and prints, these are pared down. In doing so, he makes each motif earn its due — the flat edge on a foot or arm conveys that it’s displaced from its original source. 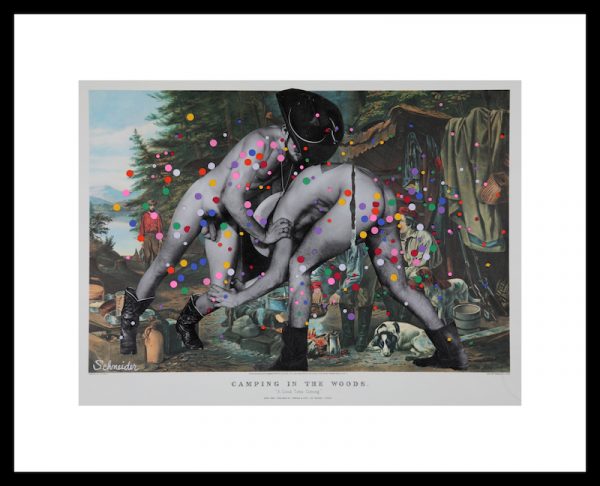 Bob Schneider, Camping In The Woods

His subject matter is fairly consistent piece to piece (with each backdropped by a Currier and Ives pastoral print), each featuring a body or character from, say, a ’60s porno magazine or comic book, and an additional, expressive burst of collaged-on, colored dots. The occasional domestic tableau and outdoor scenes are rife with the drama of foreplay or catching-them-in-the-act. (“You Told Me You Loved Me!”) The titles are knowingly didactic, like this piece is about toxic masculinity, and the works function as a series, dependent on each other for fuller context. Schneider’s visual tropes — dots, fruit, flowers, cleft chins and dimpled asses — work in a staccato flow, as well, like a musical composition. 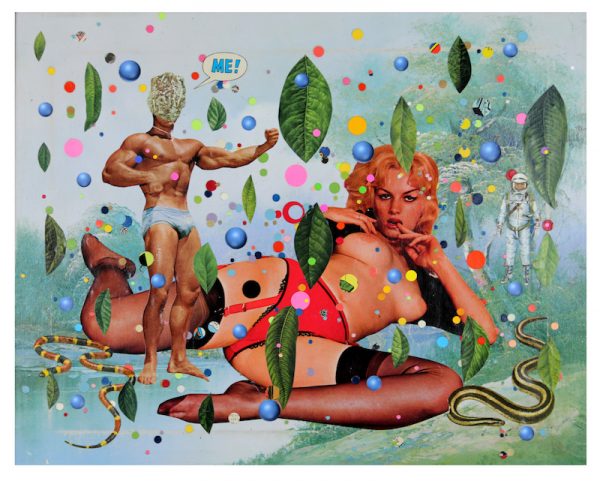 Bob Schneider, Fooling Yourself Into Thinking It Changes

Fetishized images are laid on thick: SEX! Gay cowboys, rounded breasts, feather boas, idyllic landscape, mad men, midcentury modern interiors — all with a distinctly Betty-Crocker-cookbook color palette. But Schneider maintains a lightness to the work. Maybe it’s inherent in well-done collage, but these works are truly pleasurable, personal, and a little subversive. In that way, they deliver an energy similar to the posters you tacked to the ceiling of the loft attic of your parents’ house that you finally got to move into.

Bob Schneider, We’re Never Really Sure If The Life We Live Here Belongs To Us 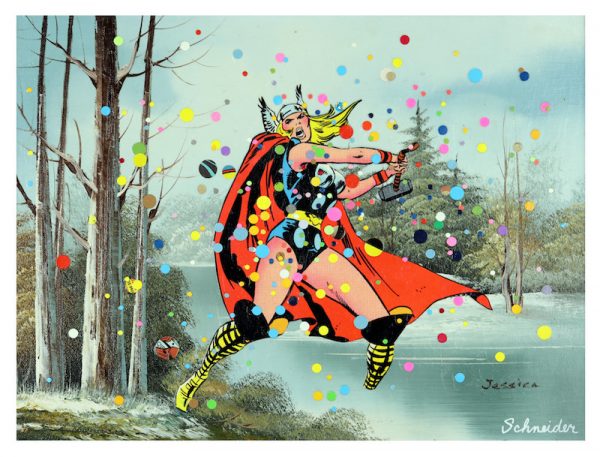 Schneider’s design-friendly aesthetic is counterbalanced by his subtle finesse of images of strength. The clothed (often superhero) figures in these works, oddly, aren’t fetishized; rather, they’re granted tension and fragility: falling, cut off below the knee, screaming, squatting. Whether bursting with visual stimuli or more sparse, these works speak to lonesomeness, self-discovery (wink), attitudes about sex, and the kitchen-sink drama of everyday life. 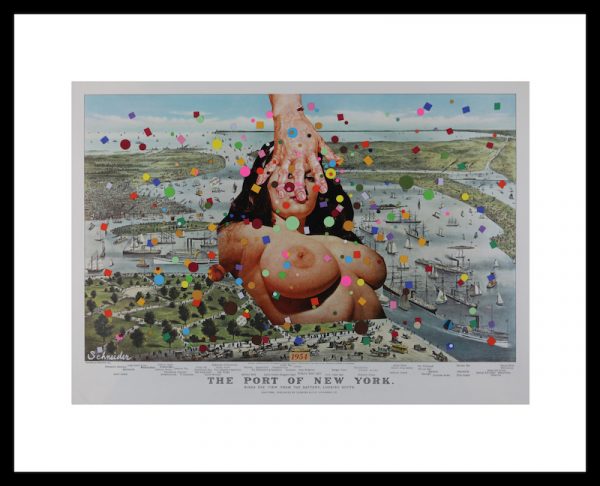 While relatable, some moments feel risky (risqué?); many of the collages were edited out of the main exhibition and are stacked in the gallery office (Redbud owner/director Gustav Kopriva selected the final works for the show). Those left out include the more overtly pornographic female figures and portraits where raw meat functions as a stand-in for the body or portrait. In this “moment,” meat disguising women’s faces causes both a gut reaction and food for thought — what does Schneider mean by that? I wish these had been included in the exhibition to cause a little ruckus. In any case, I categorize these works in the pop tradition of Eduardo Paolozzi, and in the more Texan tradition of the Wheeler Brothers: they’re rife with fun, sex, and politics. An odd (if not audacious) combination in 2019.