Glorious Art Nerds and the Lecture, Smecture: Tuesday Evenings at the Modern 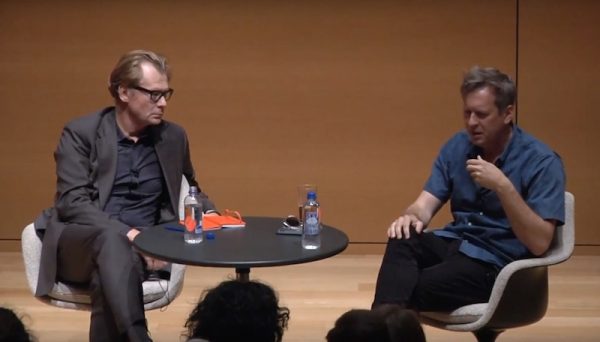 The nerdiness of going to art lectures on weeknights cannot be overstated. But judging by the crowds that consistently show up to the acclaimed Tuesday Evening lectures at the Fort Worth Modern to listen to artists and curators talk about their work, you could be fooled into thinking that these nerds are cool. There was something special, for instance, about the public conversation between artists Shelby David Meier and Iva Kinnaird back on October 3, which made me think about my history attending this lecture series. It was the feel of spontaneity of the evening that got me thinking, and while I’ve gone to Modern lectures featuring masters of the unconventional, like artist Jayson Musson, a.k.a. Hennesy Youngman  (fall of 2011), and Andrea Frazer (spring of 2012), this one was different.

Meier orchestrated a tour of the museum via Face Time with Kinnaird, and they broadcasted their conversation from the stage. It symbolized the role of play and of the mundane in each of the artist’s practices, while creating a shared space between the audience and how we experience art. The duos’ delivery dispelled the need for any previous art knowledge in order to enjoy the presentation. Using a cellphone to perform our relationship with art in museums, Meier and Kinnaird explored ways of understanding the intersection between art and life. It is from this kind of intersection, instigated by the museum’s Curator of Education Terri Thornton when she started the lecture series in 1991, that I was first introduced to this portal that invites artists, curators, and writers from around the world onto the patch of land between Montgomery Street and University Drive in Fort Worth. 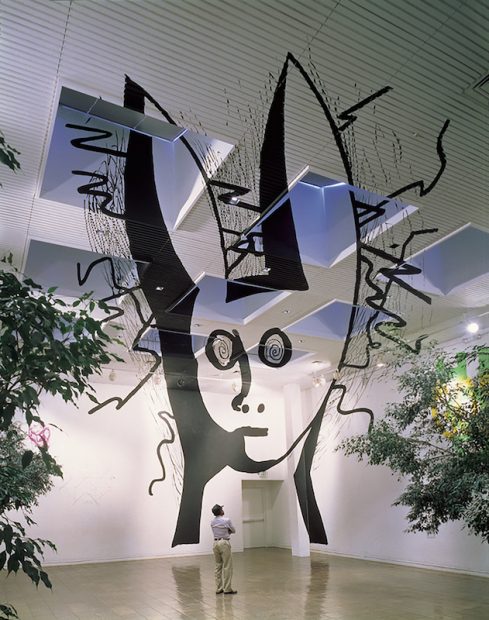 This was the Fort Worth’s Modern’s auditorium when it was still in its old building, with its Borofsky mural

I’ve been watching the nerds that come to these lectures since 1995, back when it was in the Modern’s old building across the street (which now the Fort Worth Community Arts Center). Back then, the nerds drank free wine, and folding chairs were brought in to fill the auditorium space. And it was there, under the giant Borofsky Self Portrait With Big Ears mural that I got my first introduction to “real” artists.  One memorable moment for me, about a decade into my museum lecture attendance, came when Andres Serrano showed slides (yes, photographic slides, with a slide projector) of his ejaculation series, and talked about Piss Christ. This was in the fall of 2005, in the waning years of the culture wars of the ’80s and ’90s that pitted the likes of Jerry Falwell and the Moral Majority, along with Ralph Reid and his Promise Keepers, against these nerds. Art had been made to seem immoral and unworthy of public funds from the National Endowment for the Arts, and groups like the Moral Majority and other conservative lobbyists pushed hard to make art great again by encouraging a public outcry against these nerds. And yet, the nerds and their nerd audiences persisted.

Over the years, I’ve kept going back to listen along with this audience of art nerds, as they show up to watch featured nerd artists trying to change the world around them. One of these artists, Agnes Denes, came out in the spring of 1997 to talk about planting a forest of trees and growing a wheat field near New York’s World Trade Center. It showed an almost spiritual connection to art making that was unfamiliar to me at the time, to say the least, and that has stayed with me since. 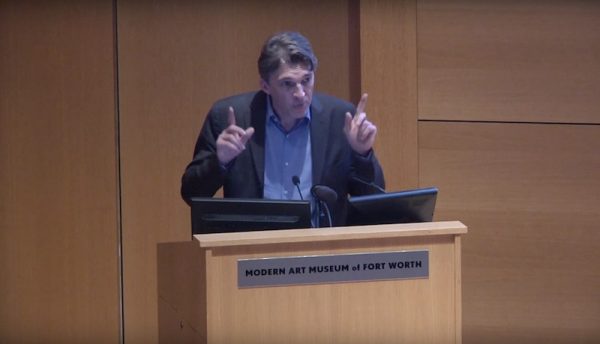 Nicolas Bourriaud at the Fort Worth Modern

Artists aren’t always the most authoritative speakers about their own works, and there have been some misses in the lecture series, to be sure, and even cringe-worthy moments. But for anyone interested in art, the series is an irreplaceable experience. My final semester in Texas Christian University’s art program, in 2002, coincided with the inaugural season of lectures at the Modern’s current Tadao Ando building. It was a gift, listening to first-person insights from artists Richard Prince, Carl Andre, Vija Celmins, Jackie Winsor, Sean Scully and others, and the year in the series stands out for me. 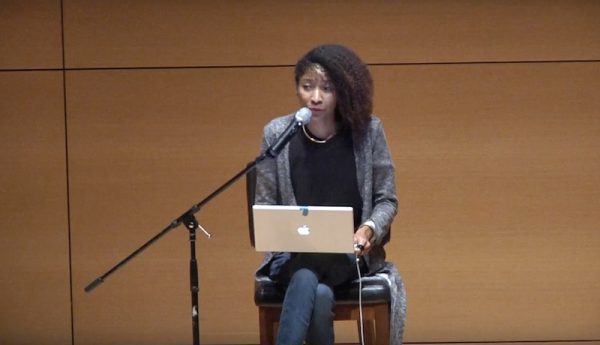 Artist Lauren Woods at the Fort Worth Modern

Although the series’ curatorial mission is to bring us artists from around the country and internationally, the Tuesday lecture often pivots between the international and the local — Kara Walker but also Annette Lawrence, or Kenneth Goldsmith but also David Bates — giving us a taste of what’s under our noses here in North Texas, and certainly what lies beyond, both east and west of I-35.

With the popularity of Instagram and Facebook, where any artist can promote their work, it’s easy to believe that creating art and becoming a successful artist is only a click away. But the Modern’s lecture series offers a supplemental approach for artists trying to get a handle on the business of being an artist. It creates an ongoing focal point that is unmatched anywhere else in the state, where all North Texas artists can converge and build relationships around art. On any given Tuesday night at the Modern, you can run into at least a dozen of the region’s most committed artists, who themselves could teach you a thing or two about painting, drawing, sculpture, or art history, or simply chat with you about their work, or learn about yours. You can usually find them in the Modern’s cafe bar about in the hour before the lecture starts, talking politics, projects, and everything in between. Before I started hanging out in the cafe, I took more than a few sidebars across the street from the museum at the Great Outdoors sandwich shop, getting to know artists Annette Lawrence and Vincent Falsetta, who have since become good friends.

Joyce Pensato at the Fort Worth Modern.

The lectures are consistently attended by art students and professors from area universities, though I do wish I could run into more of the younger, regional emerging artists on Tuesday evenings — ones who aren’t in school anymore but trying to make it as artists. I suspect that they either don’t know about the series, or think that it’s a stuffy, even nerdy exercise that they can’t be bothered with. I’ve been attending the lectures for so long that frankly, maybe at some point I saw it that way, too. But anytime I make it past the parking lot and into the building, I know something special is happening and I’m lucky to have access to it. I suspect that if these emerging artists could make it past the parking lot, too, they might feel a little differently about Tuesday nights at the Modern, and the community it hosts, and share their own nerdy war stories about the game.

For more info on Tuesday Evenings at the Modern Art Museum of Fort Worth, please go here. The Museum’s Youtube channel, which features some of the taped lectures, is here.

I love you Chris Blay. And it has been a pleasure hanging out with you on Tuesdays for 23 years.

A fine and well-earned tribute; thank you Chris & Terri.

There is nothing else like it! Cheers to Terri for the monumental success of this series.