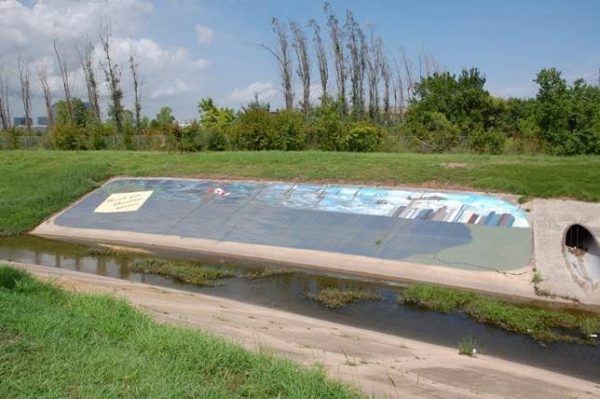 On Thursday, August 16, a new mural in Houston will be unveiled in the Westchase District: It’s titled Harvey Heroes, and it’s by Houston-based artist Larry Crawford.

Harvey Heroes is a 100-foot wide, 20-foot tall painting, and is part of Westchase District’s Arts Plan. Via Ward Communication: “Currently the District features three murals created by Larry Crawford and Reginald Adams, four tile mosaics created and installed by Adams, as well as ten muralitos on signal boxes at major intersections in the District.”

This particular mural, at the intersection of the Brays Bayou Connector Trail and the Wilcrest Connector Trail, adorns a concrete slope of a flood control channel. “Designed as a tribute to Hurricane Harvey rescuers, it will be a permanent reminder of the selflessness and community spirit of Houstonians and others, who volunteered countless hours to help those affected by Hurricane Harvey.” (The exact location, for those seeking it out: North of Westpark Tollway from METRO Park & Ride at 11050 Harwin Dr.)

The mural will be protected from graffiti and the elements with a rubberized sealant.

Here’s a detail from the mural during Crawford’s process, prior to its unveiling: 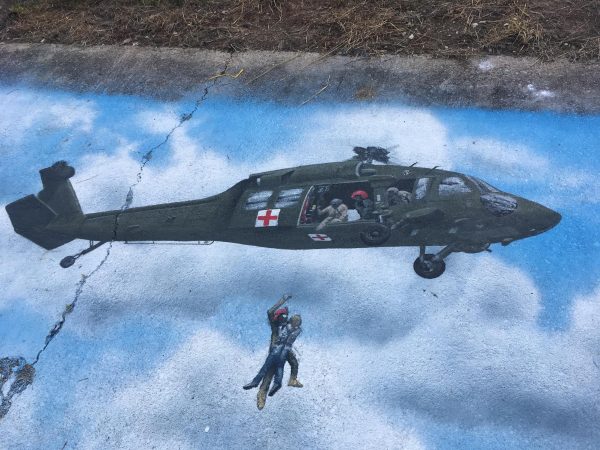 We will have to do more murals soon, because the city has done a lot of nothing to prevent from future floods