Monika Sosnowska at The Contemporary Austin 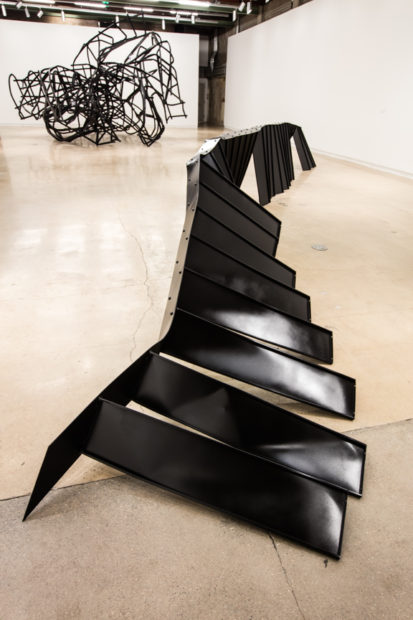 Habitat is a collection of recent sculptures by the Polish artist Monika Sosnowska, best known for her enormous skeletal architectural forms. The designs are phenomenal. We could be content to admire Sosnowska’s capitalization on the engineering genius of architectural elements, highlighting the imperceptible grace in the design of, for example, a fire escape. But her sculptures of mutilated building elements are not creative approximations of architecture; they are staircases and other building elements fabricated to industry specification, distorted and reassembled. 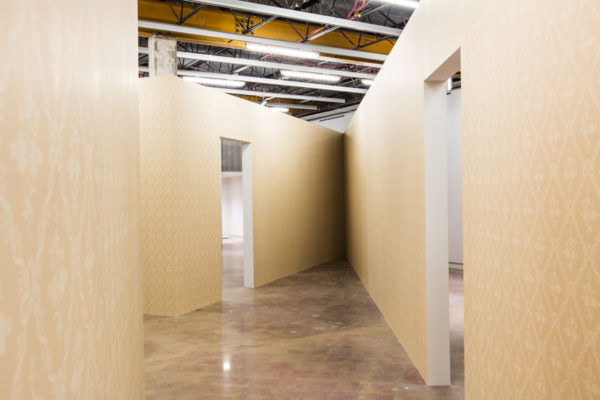 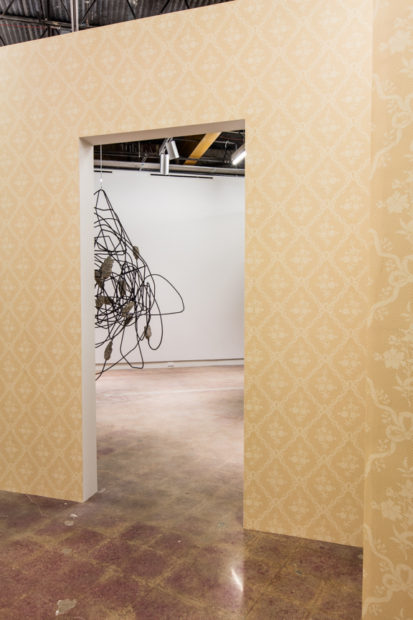 The entirety of The Contemporary Austin Jones Center’s newly expanded first-floor exhibition space is occupied by Monika Sosnowska’s triangular maze of wallpapered temporary walls. Antechamber is a re-imagined version of Sosnowska’s “para-pavillion” from the 2013 Venice Biennale. The effect is of the perimeter of one physical space having been folded to fit within the physical confines of another space. Within the maze-like structure, small triangular rooms house individual pieces including one that resembles a stainless-steel bike rack pulled out of the ground, concrete footings intact, wound up like a twist-tie. 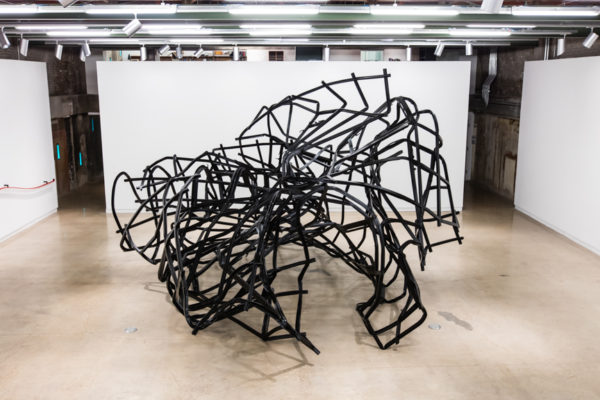 Upstairs, what looks like an entire small building’s compressed and contorted metal frame lightly touches the floor at only a few points. Nearby, a black staircase sits precariously on its side. Another piece, a red vinyl-coated, steel handrail is made into a scribbling line across the wall. These individual pieces are immense. The simple act of disorienting these manufactured items and repositioning them in space exposes the true size of the structures that normally enclose, support and surround us.

I use the word ‘structure’ in the sense of the physical form—of what is visually represented as objects—but also in the metaphorical sense of the elements that comprise, and hold up, the ideological apparatuses Sosnowska seems to be referencing. –Isms, forms of governance, institutional practices, curatorial decisions: these do not stand on their own. They are supported by structures in place to maintain them. 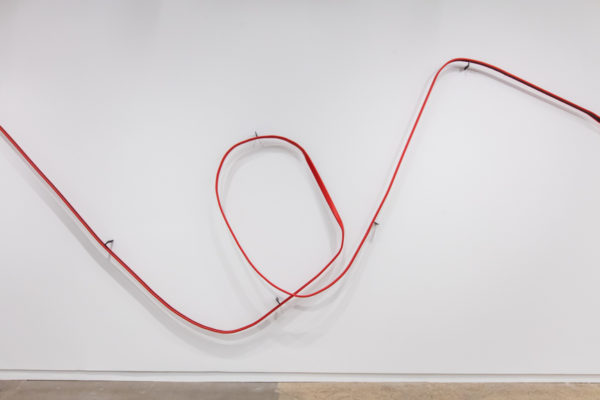 Sosnowska’s massive structures crumple like paper: they metaphorically succumb to the forces outside of the artist’s manipulation. By this I mean that they seem to bend and contort to the demands of historical time and the force of an ideological gravity, as if there were an invisible hand playing with the material structures of industry. Even more, the transformation of industrial scrap into luxury commodities—works of art—highlights the arbitrariness of those structures that simply exist. Sosnowska’s sculptures gain their specificity by separating themselves from their material origins.

Structures of support—distinctly to support people—are malleable and flimsy when removed from their context, and thus ungrounded and unhinged, they become purposeless. Sosnowska’s most striking pieces are the big ones like scaffolds, fire escapes, and frames of buildings. Intended to enclose, protect, and assist us, they are the most telling when they fail. A broken step doesn’t go unnoticed. When these structures are constructed by entities supposedly serving the people directly affected by their dereliction, the emphasis is greater, the failure more acute. Suddenly, the metaphorical rug is pulled out from under them, or the roof literally collapses. This breakage, rupture, failure creates a void—an interruption in service. What fills that void? What envelops Sosnowska’s sculptures? What haunts those spaces: nostalgia, fascination with ruins, a lesser evil? It’s not hope.

Something animates these truncated forms. Something resonates from the cold industrial material which is only describable as ghosts. Distortion found flickering in the repetition of forms, in the unwavering stamina of Sosnowska’s attempts to represent the unrepresentable. Reminiscent of something familiar, something known, but not in reality—only in memory or constructed out of it. Perhaps the familiarity of elements (the I-beams, concrete, and shaped steel) being disjointed and extracted from contextualizing location finds a new virtual placement that—having a very minor role in conscious activity—has influenced the subconscious perception of space and time.

Our ability to deal with the present as a distinct point in history is disjointed. We are asking ourselves to understand the present as a continuation of time and history that we only vaguely understand. The present infinitely repeats itself as a continuous vanishing. Or as writer-philosopher Mark Fisher puts it: “What has vanished, or is embodied in this vanishing, is not the disappearance of a particular object, but of a trajectory of social structure… what should haunt us is not the no longer of actually existing… but the not yet of the futures that popular modernism trained us to expect, but never materialized.”