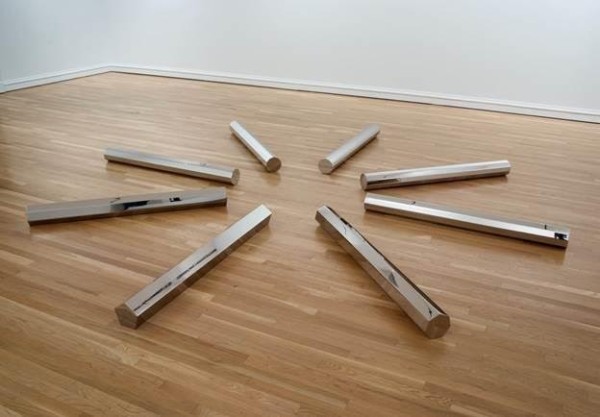 The Dallas Museum of Art and the San Francisco Museum of Modern Art have jointly acquired Walter De Maria’s sculpture Large Rod Series: Circle/Rectangle, 5, 7, 9, 11, 13 (1986). Additionally, the museums have purchased De Maria’s Pure Polygon Series, a suite of works on paper created by the artist in 1975-76. The new acquisitions are set to be on view at the DMA in the fall of 2016 and the SFMOMA in the spring of 2017.

Large Rod Series: Circle/Rectangle, 5, 7, 9, 11, 13, like many of De Maria’s works, is influenced by mathematical concepts. The piece can be installed three different variations, illustrating three different mathematical patterns. The sculpture was last exhibited at Harvard’s Fogg Art Museum in 1986.

The artist’s Pure Polygon Series consists of seven abstract geometric graphite drawings that were produced using a stencil. In each drawing, De Maria’s shapes are faint and difficult to see—the artist believed that ‘“the invisible” should be considered an essential component of artistic production.’

The acquisition of De Maria’s sculpture and works on paper marks the first time the DMA and the SFMOMA have collaborated to accession works. These works are also the first pieces by De Maria to enter either museum’s collection.

Octavio Medellín: Spirit and Form at the Dallas...

Flower of the iPad: Geroge Grosz in Dallas:...