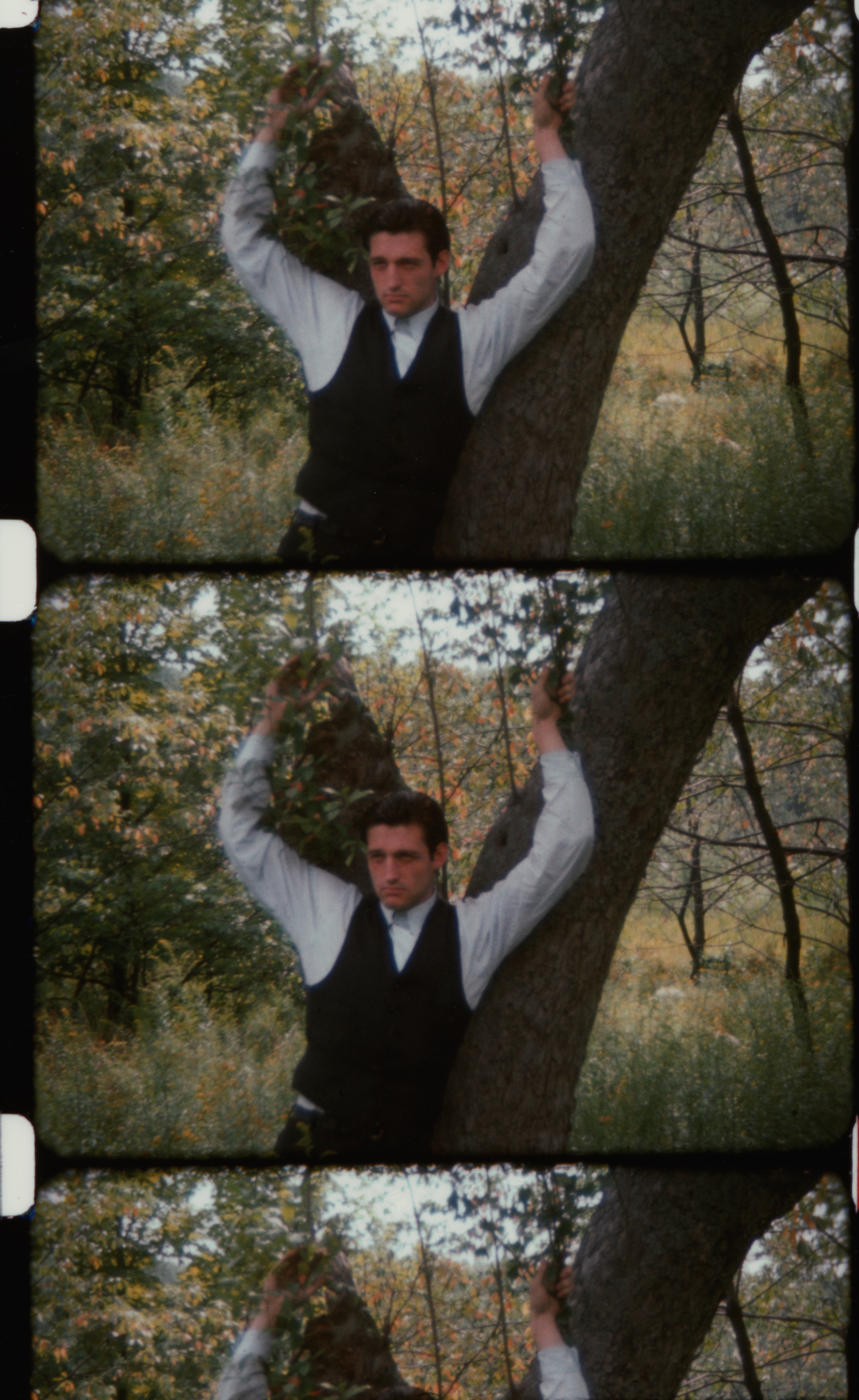 Still from Gregory Markopoulos’ The Illiac Passion (1967). Courtesy of the Temenos.

This past February, a group of central Texas cinephiles saw a phantom. Austin’s Experimental Response Cinema (ERCATX) and the Alamo Drafthouse co-presented an extraordinarily rare screening of Gregory Markopoulos’ 1967 film The Illiac Passion in pristine 16mm film. Markopoulos is the least-screened of the major figures of US avant-garde cinema and its most chimerical. Opportunities to see Markopoulos’ films are infrequent and very little of his work is available in any digital format. (To the best of my knowledge there are only three of his films that are readily accessible: a mediocre transfer of the relatively minor Christmas, U.S.A (1949) and worthless, degraded VHS-sourced transfers of Twice a Man (1963) and Sorrows (1969)). This was probably the only time The Illiac Passion has been projected in Texas, and it’s unlikely that Texans will get an opportunity to see another Markopoulos film for quite some time. Unless, that is, they’re willing to fly to Greece. 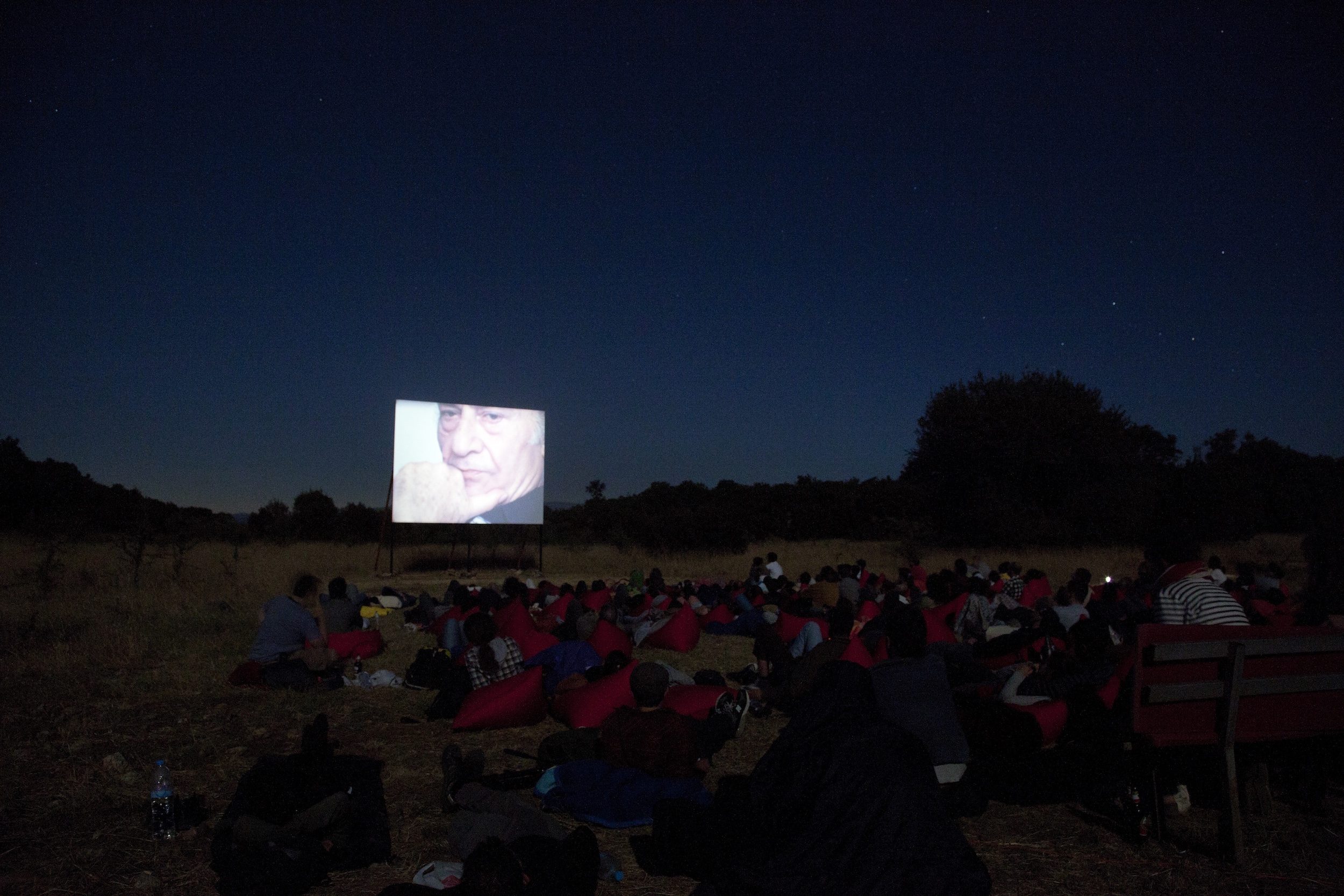 In 1967, the year he finished four years of work on The Illiac Passion, Markopoulos left the United States for Europe with his partner Robert Beavers (himself a singular and important avant-garde filmmaker). Soon thereafter he removed all of his films from distribution and requested the chapter on his films be removed from P. Adams Sitney’s Visionary Cinema, then the major text on US experimental cinema. Eventually he came to the decision to reconstitute the totality of his cinematic output as one extended piece he titled Eniaios which, when completed, would run more than eighty hours. In addition to the film, Markopoulos and Beavers built the Temenos, an outdoor screening venue outside the Greek mountain village of Lyssarea, which was to be the only venue where Eniaios would be shown. Markopoulos finished editing the twenty-two cycles of Eniaios before his death in 1992 but couldn’t afford to make prints. Beavers continues getting the finished cycles printed one at a time as finances allow; each cycle costs tens of thousands of dollars to print. Every four years Beavers hosts a Temenos screening, showing the most recently printed cycles of Eniaios to a group of pilgrims who make the trip to Greece for three or four days of late-night open-air screenings. The last Temenos screening was in 2012. This June cycles IX, X, and XI of Eniaios will screen for anyone willing to make the trip. 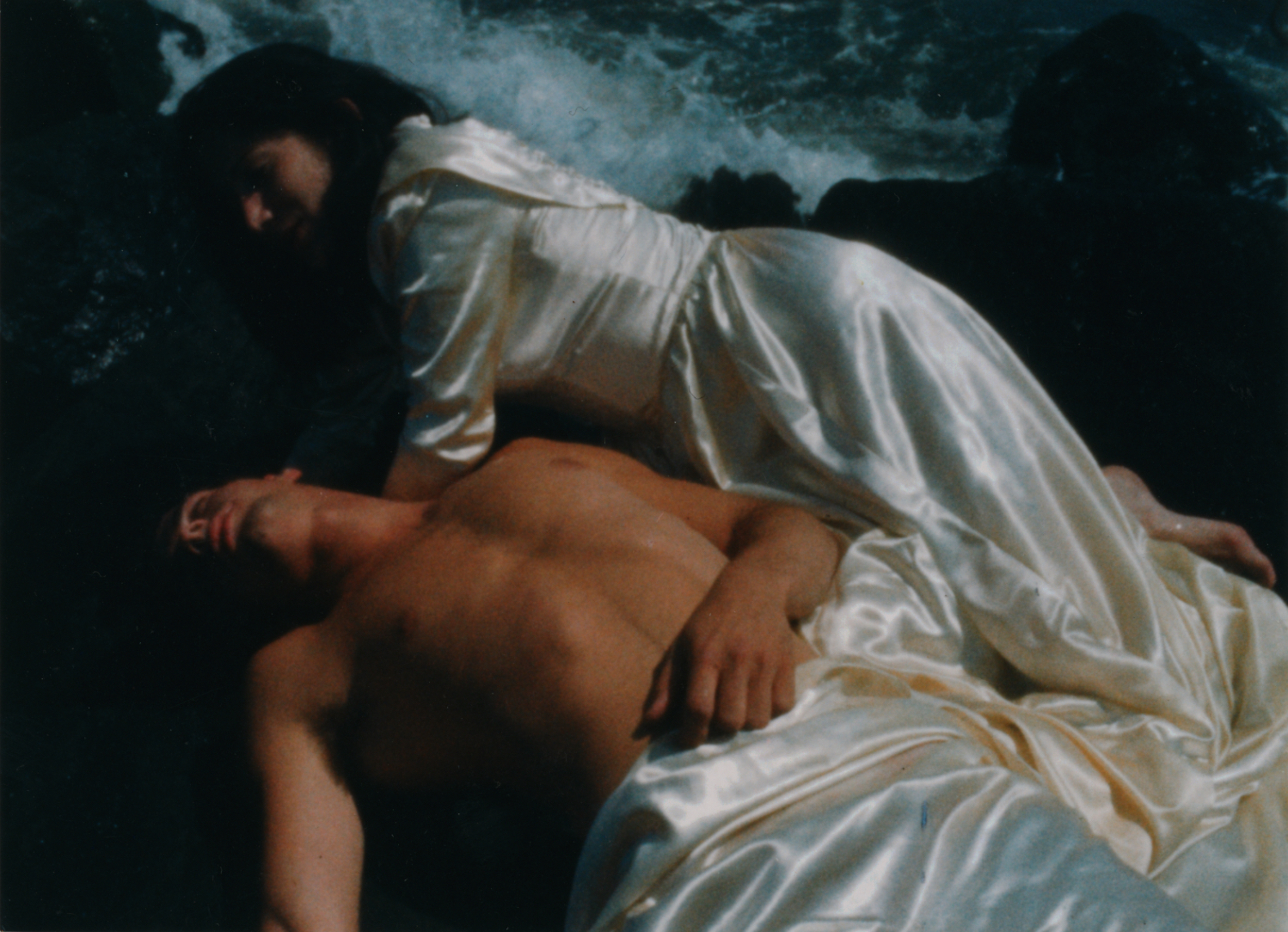 Still from Markopoulos’ Twice A Man (1964). Courtesy of the Temenos.

Eniaios is radical and austere: it is totally silent and long stretches of opaque black film separate very short bits of imagery. It’s a strange experience: at once disorienting and engaging. The vast majority of cinema unfolds in a way that tends to make the viewer forget that she is sitting in a dark room. But in Eniaios the screen is dark for a large chunk of the film’s running time and there’s no way for the viewer to step away from her awareness of the conditions of the film’s presentation. Markopoulos pushed against the limits of human vision and editorial legibility with Eniaios, leaving it to the viewer to make connections between isolated single frames across oceans of black. For Markopoulos this was a key step toward making a new kind of cinema in which the individual frame would obtain its rightful place as cinema’s primary unit of meaning. This was a concern of his throughout his life.

In 1963 Markopoulos—also a prolific writer—described his approach to composing with the individual frame:

In the beginning of the motion picture, the film frame had great potential. But with the introduction of sound, a part of the frame was relegated to the service of the soundtrack. Aesthetically opposed but artistically united, sound and image failed to achieve that poetic unity in cinema that everyone had envisioned. […] I propose a new narrative form through the fusion of the classic montage technique with a more abstract system. This system involves the use of short film phrases… . The chief problem facing the maker of a motion picture with the proposed abstract form is the elimination of the abruptness with which the single frames attack the eye and confuse the viewer.

Eventually he’d come to long stretches of black as the solution to that problem. Crucially, he rejected the tendency in film to compress time through montage, instead devising a montage that drastically extended the presentation of time. His films take simple gestures and inflate them through repetition, extensive stretches of black, and cross-cutting. 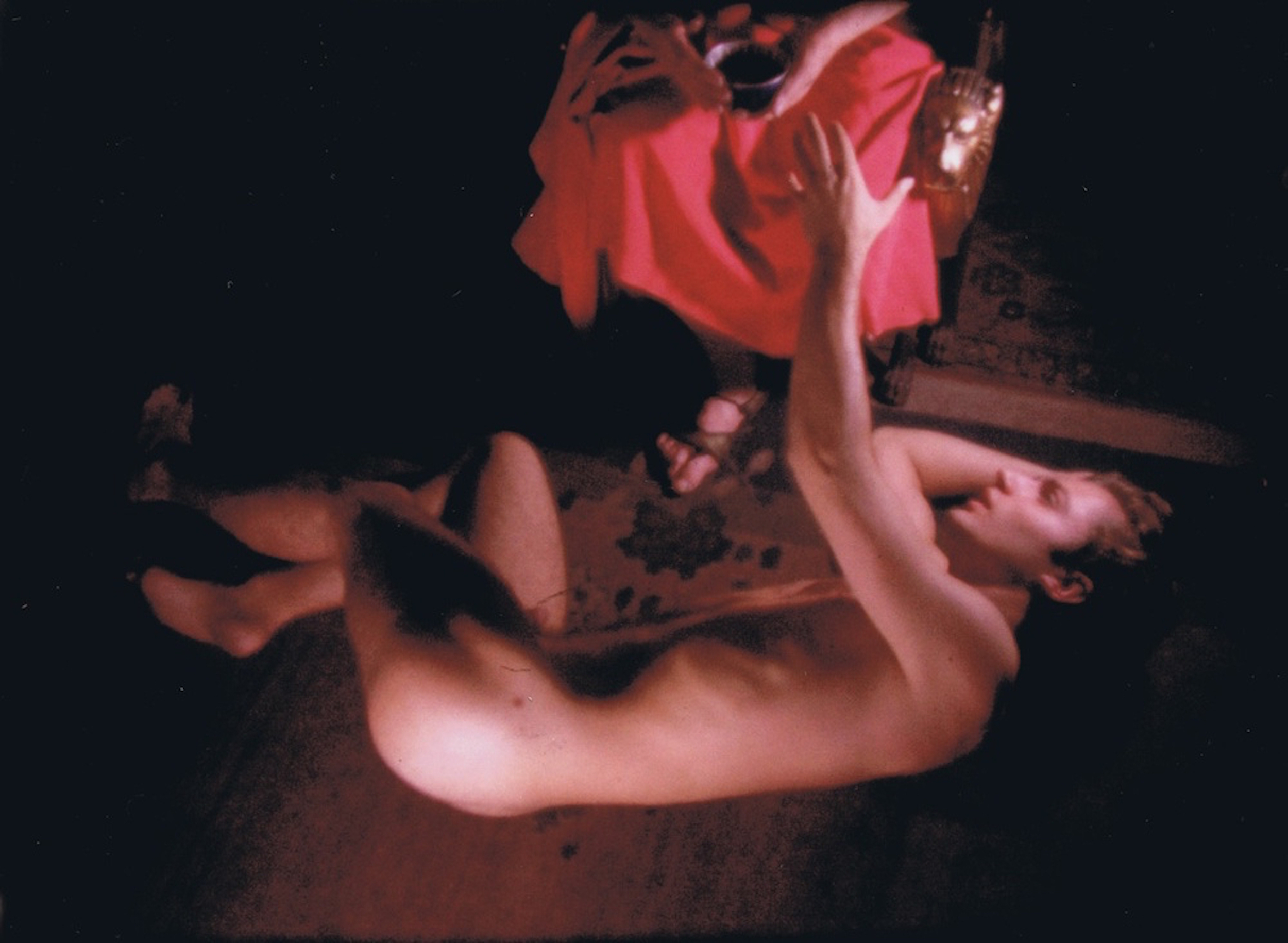 Though The Illiac Passion was made well before Markopoulos started work on Eniaios, this strategy of extending moments via repetition and intercutting is central to the structure of The Illiac Passion. Consequently, it’s a difficult film to describe. It takes as its narrative disparate chunks of Greek mythology. The protagonist is Prometheus, but he’s joined by Narcissus, Pandora, Orpheus, Persephone, Icarus, and a host of others. Some of these characters wear elaborate costume, some dress casually, in the style of New York bohemians from the filmmaker’s era. Frequently Markopoulos chooses to eschew costumes entirely and shoots his performers nude. There are always several scenes playing out simultaneously, often through superimposition and multiple exposure in addition to crosscutting and the strategy of short bursts of imagery that is Markopoulos’ trademark. Most of the scenes are simple—characters embrace, they walk short distances, they writhe, they bathe, they perform simple rituals with fetish objects. But these scenes are extended beyond how they’d play out in most films. In The Illiac Passion a kiss can stretch to several minutes. 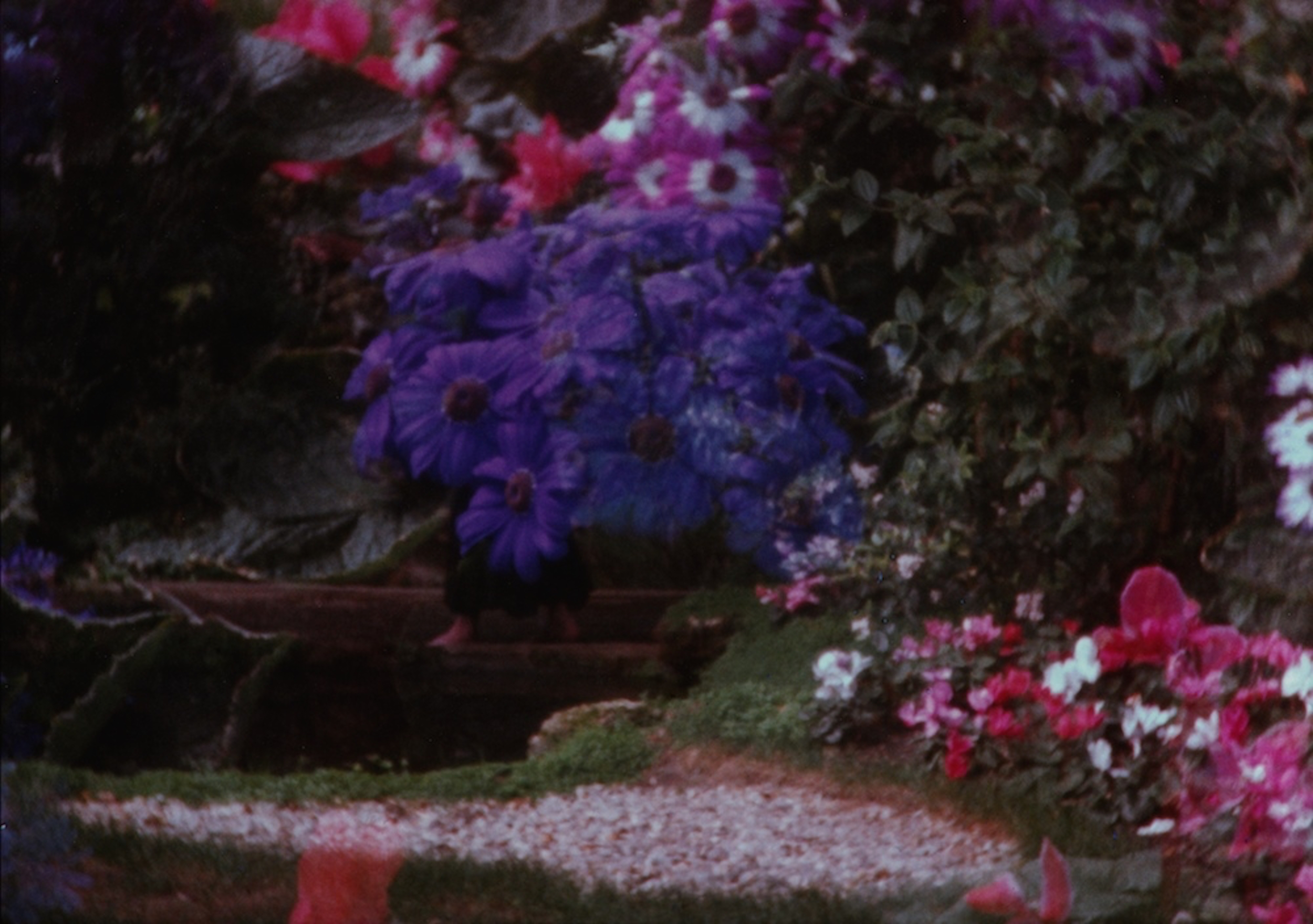 The result is dizzying. The imagery is lush—radiantly colorful and strikingly lit. The sound is non-synchronous; it’s a recording of Markopoulos reading from Aeschylus’ Prometheus Bound.  It’s not a straightforward reading: he’s often repeating words, jumping around from bit to bit in a kind of aural analogue to the film’s editorial strategy. It’s challenging to follow the narration and it frequently seems unmoored from the imagery on-screen. Over the course of the film’s ninety minutes it’s easy to get lost. 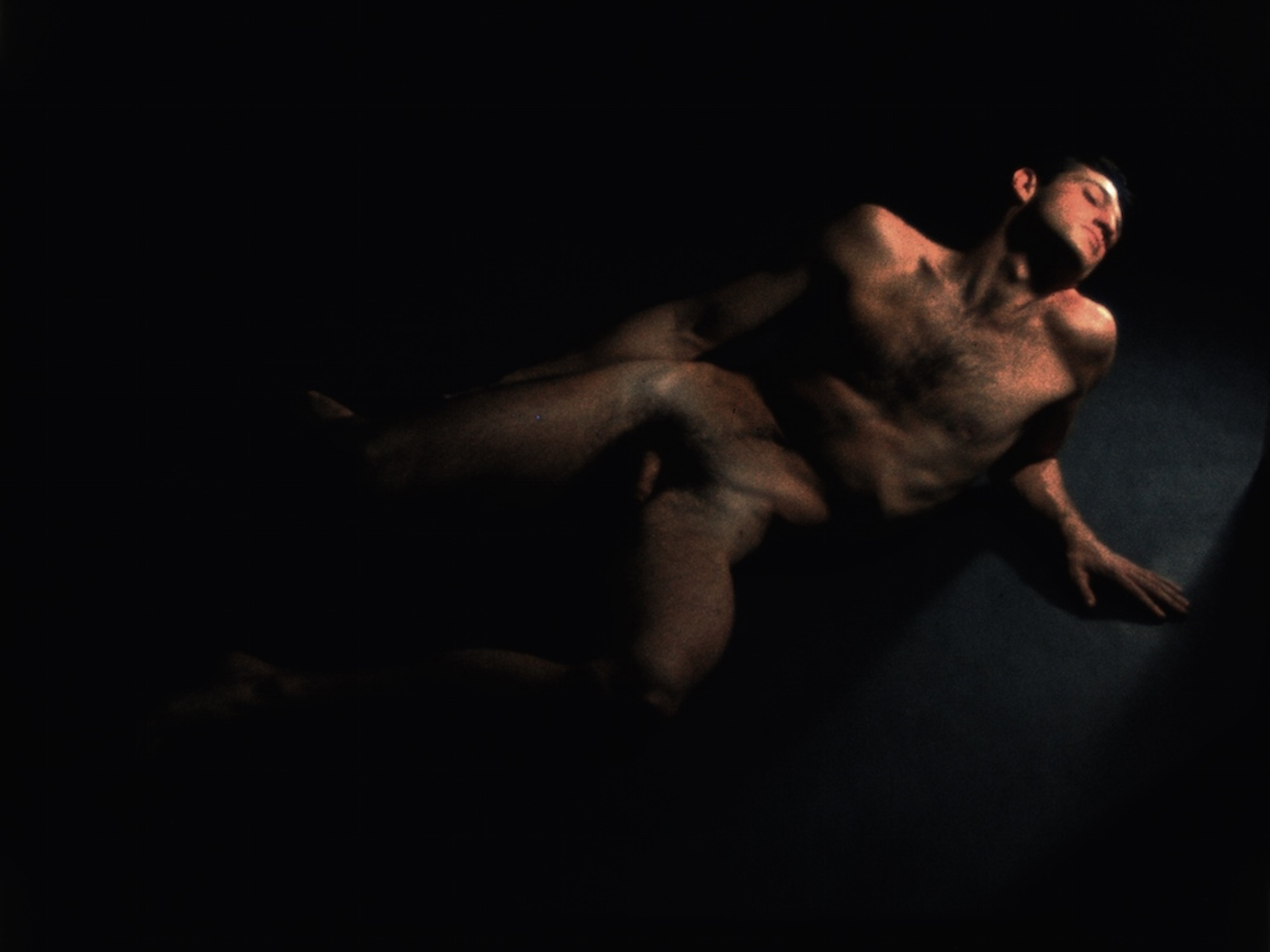 In addition to its formal adventurousness The Illiac Passion is noteworthy for its then-daring depiction of homosexual desire. Markopoulos had long been a champion of homosexuality in cinema and was one of the first filmmakers to depict sexualized male nudity and gay sensuality in his films. He had, at that point, been doing so for over a decade and it had caused him considerable trouble. At the time it wasn’t uncommon for films to be censored, and some of his contemporaries (like Jack Smith, who appears in The Illiac Passion) were arrested and charged with obscenity. Markopoulos was brave and outspoken on the need for films to depict gay sexuality and he clashed with many of his contemporaries over this subject (including film scholar Andrew Sarris) but remained uncowed. Markopoulos was particularly adept at shooting the male form and The Illiac Passion is full of beautifully photographed male bodies. These are athletic and powerful bodies, like Greek marble sculptures from the classical era Markopoulos idolized. Markopoulos saw a direct connection between those sculptures and the bodies in his films. He wrote that film was “the noblest medium of our time, if not all time. A medium as noble as sculpture was for the ancient Greeks; for film deals with man.” 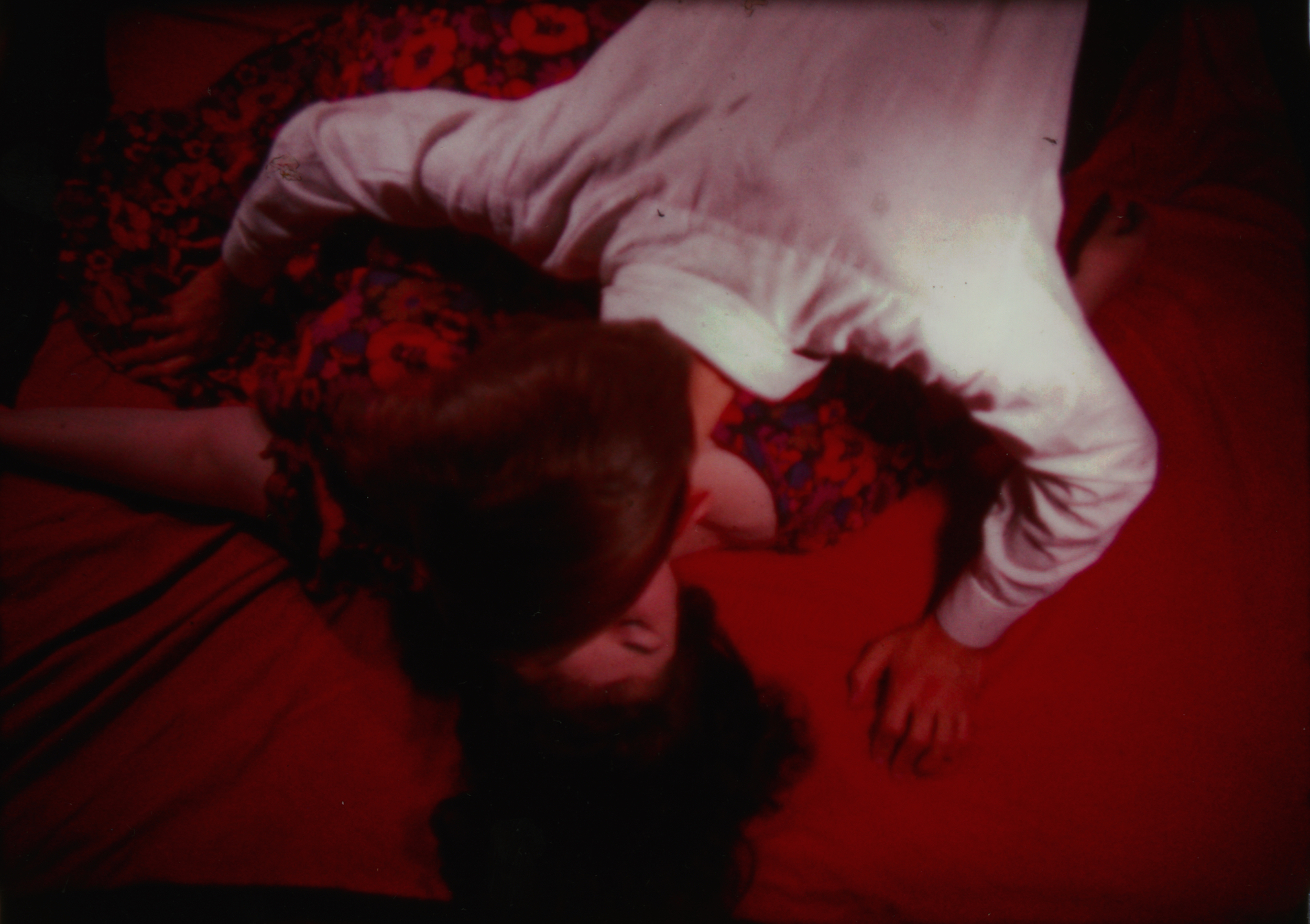 But this nobility is an open question; there’s something old-fashioned, even reactionary about that sentiment. A fascination with Greek antiquity permeates Markopoulos’ work, and by the sixties that fascination had acquired dark undertones. Modern Greek democracy, always fragile, was overthrown by a right-wing military junta in 1967 which harkened back to the quasi-fascist 4th of August regime which ruled Greece from 1936 to 1941. That earlier regime, led by strongman Ioaniss Metaxas, was preoccupied with the classical era and intended to return the nation to ancient Greek values and initiate a so-called Third Hellenic Civilization, conspicuously mirroring the Nazi Third Reich. The 1967 regime was less overtly Hellenistic in outlook than the 4th of August regime, but it was nevertheless authoritarian, brutal, and repressive. It’s unclear if Markopoulos was aware of the Greek political situation, but even after his move to Greece he remained fascinated by Greek sculpture and architecture. 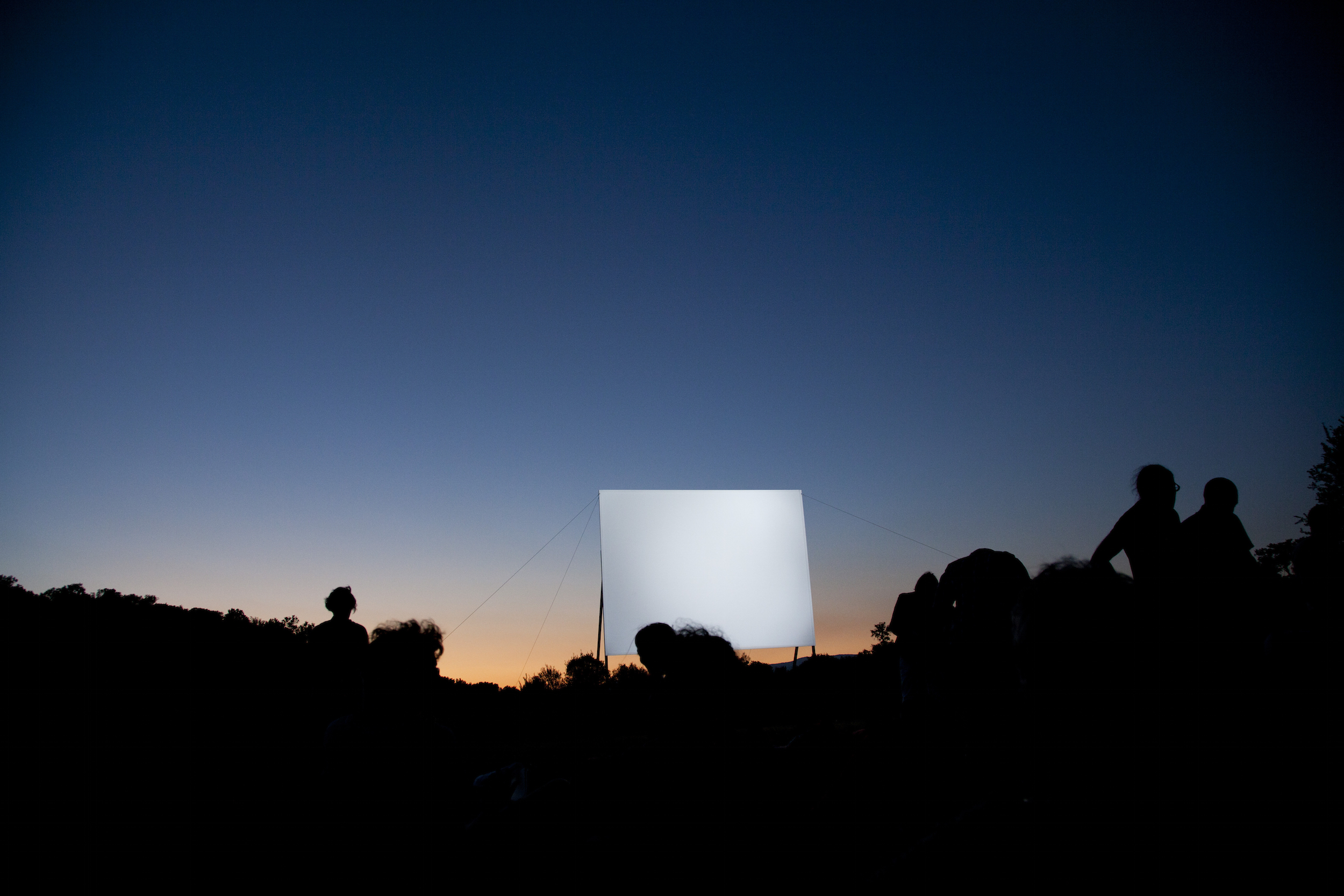 Sunset at the Temenos site in Lyssarea, Greece. Courtesy of Kamilo Nollas.

This shouldn’t detract too much from the accomplishment of The Illiac Passion. There are few films from that era or any other that combine its masterful cinematography, distinctive editing, and wild ambition. It’s a singular viewing experience, and it’s to their great credit that ERCATX and the Alamo Drafthouse were able to bring it to Texas. With any luck this signals an increased availability of Markopoulos’ films outside of the Greek peninsula, and hopefully the ERCATX-Alamo partnership will continue providing Texans with the opportunity to see programming of this caliber.