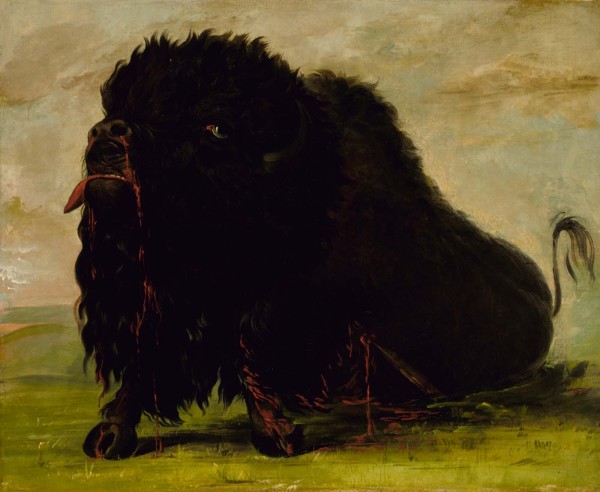 Dying Buffalo, Shot with an Arrow

The Panhandle-Plains Historical Museum is up in Canyon, Texas, just beneath Amarillo, and it’s a state treasure. Partly so in its unabashed sentimentality for its own region’s history and geography— the self-regard either borders on kitsch or is full-on kitsch in about half of the permanent exhibitions—and partly in that this museum has a real purpose in honoring its region and clearly strives to do right by it. I was there to see a lone traveling exhibition, but ended up walking through every inch of the museum in a kind of overwhelmed reflex; my thoughts ricocheted from startled to amused to fascinated to validated to grief-stricken. Room after room of fossils and dinosaurs, classic cars, a pioneer town you can walk around, a full-size drilling rig (!), a big gun room packed with revolvers and Lugers and Winchesters. And the museum has bent itself backward, as it should, to illustrate the grim late history of Native Americans in the Panhandle. There’s a lot of blood on this land. By the time I walked out to my car hours later I was dazed and exhausted. I don’t think the PPHM would have this effect on everyone, of course, but that’s one hell of a ride when you’re not expecting it. 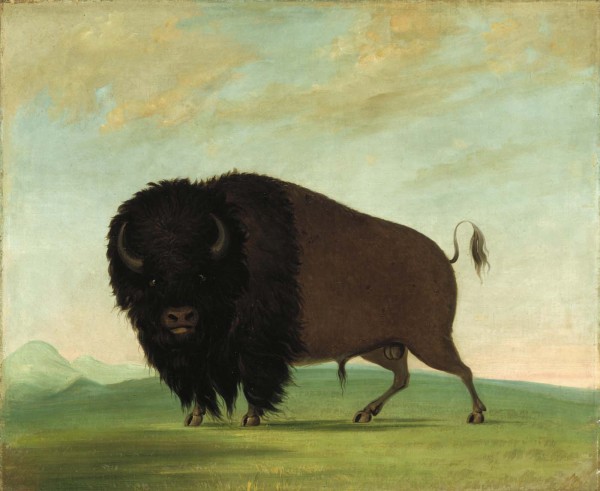 Buffalo Bull, Grazing on the Prairie

Right now the museum is hosting the last leg of a small and gorgeous traveling exhibition sprung from the Smithsonian: George Catlin’s American Buffalo. The online images were haunting enough to get me in my car for the six-hour drive: we included it in a Top Five when it opened back in May. Catlin was a nineteenth-century painter best known for his portraits of Native Americans going about their business back when the Old West was still mostly our idea of the Wild West—endless rolling landscapes and jutting canyons under massive blue skies; giant herds of buffalo thundering across a vast prairie. No barbed wire. No interfering pioneers or soldiers. The paintings in the show are split into three catagories: buffalo in their full glory without humans around; formal portraits of notable Native Americans; and scenes from various tribes’ daily lives (including buffalo hunts) in their native territories.

The PPHM is a perfect venue for the show because Catlin’s buffalo and Indian paintings, most of them done in the 1830s, are so much about the natural world as well as a way of life perfected over centuries on the very land the museum sits on. The stewardship of the land by the Plains Indians dragged to a painful halt in the Red River War, right there in the Panhandle, only 50 years after he painted these scenes. Catlin had been a fellow traveler of Lewis and Clark, and in the wake of the dreadful Indian Removal Act of 1830, he had some excellent ideas about turning over the entire central plains of North America to its native people and its wildlife in a kind a massive, undisturbed parkland. (We owe him for the idea of our National Park system and, indirectly, for our first, which was Yellowstone.) He was a romantic and an idealist and clearly someone who earned the trust of dozens and dozens of Native American tribes, from the Canada border down to Mexico, who shared their lives with him. He had the soul of a conservationist.

He was also ahead of his time in how horrified he was of the building massacre of buffalo (for only their hides); they were killed by white men with guns, and increasingly desperate, conned and exploited Plains Indians. The skins were sent to markets in the Northeast, leaving hundreds of thousands of carcasses rotting across the prairie. Catlin was showy and ambitious, too; he kept trying to sell his paintings to the government and it kept passing on them. (The Smithsonian owns almost all of them now, thank God.) He went broke. He’s hard not to like. 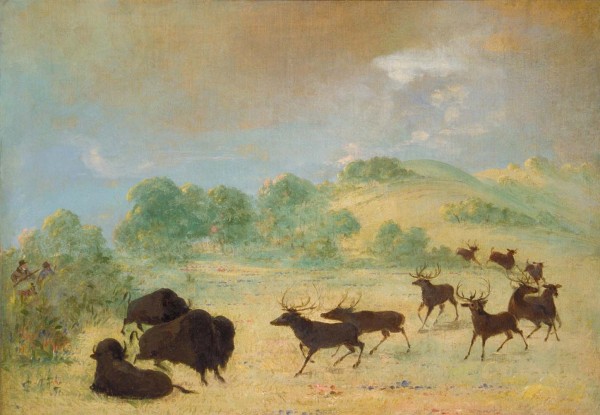 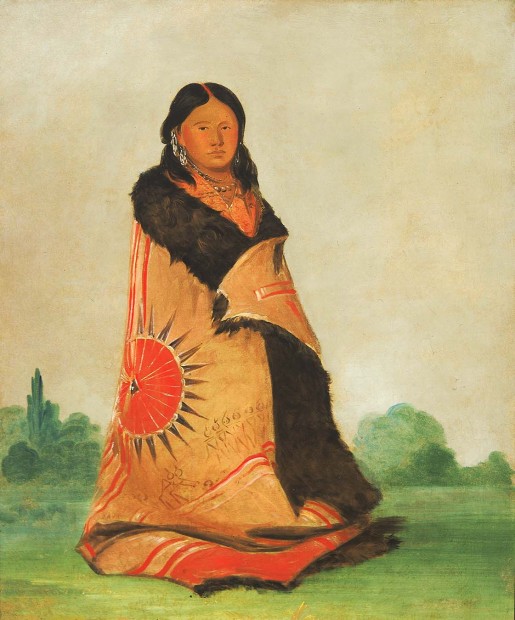 Catlin also described his experiences in writing. His written observations in his most famous publication, Letters and Notes on the Manners, Customs, and Condition of the North American Indians, from1841, make up most of the wall text in the exhibition (which is an excellent, non-annoying way to include a lot of text in a painting show). Most of the paintings, all oil on canvas, are intimate—two by two or three feet—and in a semi-academic but deft hand (he was self-taught), he tended to direct a sort of sharp, spot-lit focus on certain particulars in the fore and middle ground: fur, beading, blood, feathers. He let the rest—sky, clouds, hills, animals and water in the distance—roll out in a kind of fluid, glossy generality, and the contrast between the sharp and the hazy makes many of these feel as much like book illustrations as they are practical documentation and formal, salon-bound paintings. I love his way with perspective. It’s intuitive, and though inexact, it feels like memory—a little bit dreamlike. And though the works nowadays remind us of an unforgivable near-genocide perpetrated on these people, and even though Catlin himself was very, very worried about what he was watching happen to them, there’s nothing in the paintings themselves that point to the impending cataclysm. Catlin would have found it disrespectful, I think, to paint what he was seeing with anything less than the warmth, interest, and the regard he had for his subjects. 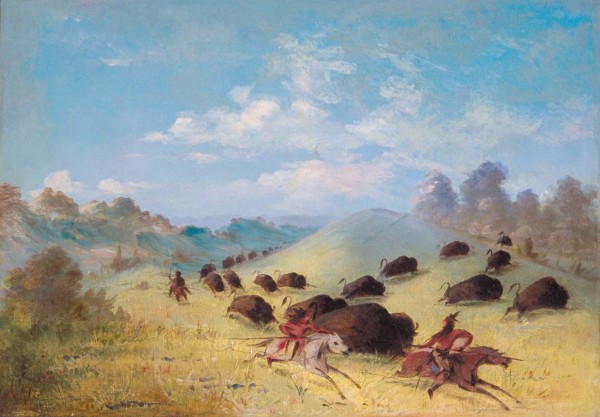 Though sometimes his language betrays his mourning. This description, paired with an unusually fast, gestural painting of a Comanche buffalo hunt—a painting style meant to appeal more to the European tastes of the time; these looser paintings are not as emotionally convincing, and fortunately there aren’t many of them—ends like this:

…its species is soon to be extinguished, and with it the peace and happiness (if not the actual existence) of the tribes of Indians who are joint tenants with them, in the occupancy of these vast and idle plains.

He’s making an appeal to an audience who won’t hear him. 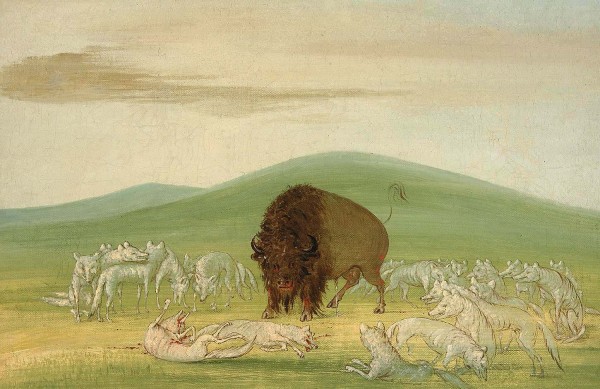 In another scene, he’s describing an old buffalo bull who’s barely alive after being savaged by a pack of wolves. He writes:

I rode nearer to the pitiable object as he stood bleeding and trembling before me, and said to him, “Now is your time, old fellow, and you had better be off.” Though blind and nearly destroyed, there seemed evidently to be a recognition of a friend in me, as he straightened up, and, trembling with excitement, dashed off at full speed upon the prairie, in a straight line.

The painting the text is describing is grim in the sense of its narrative, of course, but the feel of it has a sort of naturalist’s resignation; a sweet melancholy from a man who understands the straightforward, unmitigated way of the wild world. Some of the wolves in the painting are injured and dying as well; the bull fought a good fight.

The predators Catlin was most worried about hadn’t arrived yet.

George Catlin’s American Buffalo is at the Panhandle-Plains Historical Museum through Aug. 30.

one of the best/moving art articles I may have ever read.

Wonderful post. Saw this exhibit earlier this year at Reynolda House, Winston-Salem and am delighted to preview it again through your insightful article.

Christina,
Thank you for writing “American Buffalo”. The plight of the bison is not only heart breaking but representative of the negative impact the lack of prey animal herds has on our environment and quality of our food. Luckily group’s like
http://www.regenerativeinternational, http://www.organic consumers association and via Organica are working to get the word out. I am a emerging artist in Houston and hope to someday find the right project to help with the movement. I have not found it yet but I will.

Beautiful article. I am glad you put a light into these paintings. They are a joy to see for their directness and yes, beauty. They are what they are: beautiful paintings from before the era of self importance.

Terrific paintings! And glad to learn about the museum. Thanks!

Enjoyed the depth of this review. As a conservation assessor for Heritage Preservation, I get to see many small town museums and have grown to appreciate the efforts in spite of epic budgetary constraints. My initial response to your use of “kitsch” was defensive. Although by definition “being in poor taste but sometimes appreciated in a knowing/ironic way”, your use was accurate.
Perhaps a review on the evolution of the term “kitsch” would be in order. As someone who frequents both contemporary(I collect) and “living history” collections, I find that term unfair because it implies anything outside of this glossy “high art” environment. Again good review! Thanks!

Well done! Thank you Christina, for a refreshing review of George Catlin’s American Buffalo. I appreciate your providing context in a number of ways: the hosting museum; the social history of the times in which the paintings were made; and the artist’s beliefs and attitude toward his subject. Thank you too, for describing the work, its formal elements such as composition, light, and brushwork, in an E.B. White waste-not, want-not kind of way. After all, it is a work of art! You took my on a journey and at the end, tears came to my eyes. I do not know if it was the last quote by Caitlin, your deeply felt experience, or that I will not get to see the American Buffalo exhibition.

Thank you for writing about this.

Wasn’t that a movie?
Great read, thanks.
In fact I’m so motivated to see this before it closes SATURDAY!, that I driving from west Texas/NM to armadillos just to see this on Friday.
And I hope to stay at the Buffalo Inn Motor Court in Canyon.
Who else notable artist spent time there?
More please!

Thanks for the exhibit review. Was @ PPHM this past spring. The museum seems to have a strong following of patrons starting in grade school by the amount of visitors we saw. Quite the sweeping vista of historical events they attempt to portray.

I believe the quote was taken from Catlins writings. He was 80 years dead before Gwynne was even born.

Hello, Georgia O’Keefe taught school in Canyon! That’s who was there; just remembered