Wires cascade down from a tidy bundle traversing the perimeter of the ceiling. They funnel into red-painted, obviously cardboard tubes—tubes acting as sound speakers emerging from a tin watering can, which is anchored by a quaint white patio table. The tubes simultaneously function as arms and sirens, physically and sonically interrupting the space, yet dictating rhythm in the space as well. This centrally located tentacular speaker system serves as the focal point of a collaboration between German artist Henning Bohl and American artist Sergei Tcherepnin called Early Awnings, currently on view at the Blaffer Art Museum in Houston. 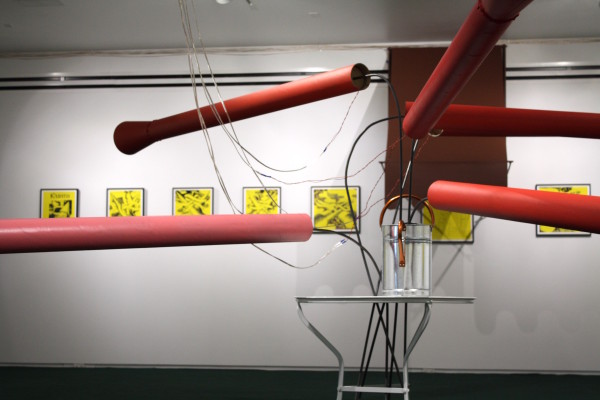 Except it isn’t a focal point. It instead functions as a sculptural see-saw, constantly attracting and repelling our engagement. We draw close, lining our ears up to the cones with a quietly emanating  repetitive synthesized arrangement, as our eyes fall on dried coagulations of paint pooling at the joints between the tubes and outer cones. But the tubes and wires are also roadblocks, threatening to clothesline us every time we start to move, and the arms keep throwing our eyes back toward the wall. This is just one example of Bohl’s and Tcherepnin’s refusal to commit Early Awnings to being either wholly experiential or a set of individual works. But the confounding notion of how the viewer is supposed to engage with what’s going on is precisely what keeps it ticking, what keeps us moving through the space, and what makes the whole so grippingly unattractive. 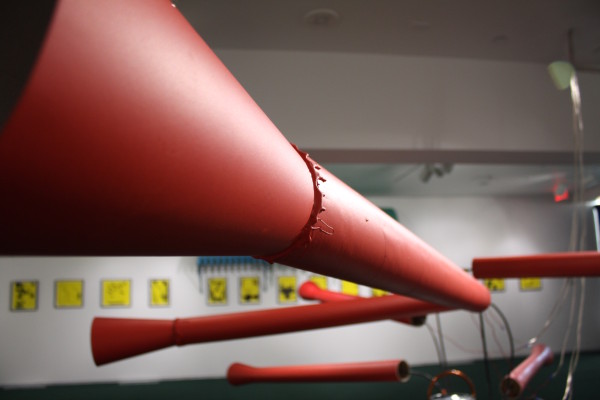 For his series of drawings entitled Kadath Fatal, Bohl cites two literary influences from the late 19th and early 20th centuries: horror novelist H.P. Lovecraft and illustrator Aubrey Beardsley of The Yellow Book. The Yellow Book was a British quarterly literary journal published between 1894-97, and Beardsley, although fired after the first year, was its first and arguably most important art editor. He is credited with the yellow color associated with illicit French novels and was known to hide inappropriate details in his drawings from publisher John Lane—decadent decisions that earned the entire decade the name “The Yellow Nineties.”

Indeed, Bohl has used yellow paper and carried over Beardsley’s silhouette-and-contour-line-heavy drawings—albeit with a thicker line quality—although there’s nothing illicit going on here. Bohl instead opts for cornets, ribbons, cheese, cakes, and amorphous curvy shapes that reside somewhere between islands and puzzle pieces: imagery that largely revolves around the treats German kids get on their first day of school. In fact, Bohl’s line work could just as easily be attributed to Maurice Sendak as it could to Beardsley; moments of his feathery strokes invoke textures in Where the Wild Things Are. The whole installation, in fact, echoes the blocky, modular colors of Goodnight Moon. It’s as though he’s illustrated an entire children’s book without any of the words, and even if one was not familiar with Beardsley or The Yellow Book, the viewer can still sense a sickly, coming-of-age discomfort projected by too-bright paper and shadowy lines. Similarly, even when we know Bohl is referencing Lovecraft—the words “kadath” and “fatal” appear in some of the drawings—we can still feel a quiet sense of terror without being familiar with the story, albeit this is a kind of terror subsumed within the everyday. 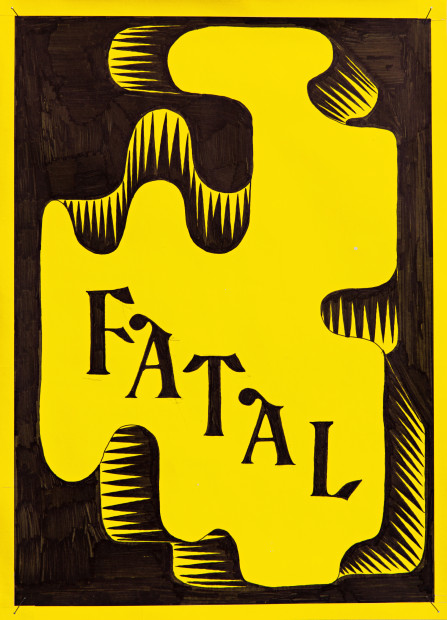 While there may be a subdued creepiness inherent in the drawings, it’s enhanced by the way they are installed. Nearly all of them are similar in scale, installed close together, at the same height, circularly around the gallery. This creates a frame-by-frame cinematic quality, a continuous non-narrative animated flicker that has us spinning in circles. It again puts the viewer in a stilted position, and again denies individual engagement, but not quite acts like an installation either. It’s a battle of two disjunctive perspectives, eliciting a self-consciousness in the viewer and somehow making one’s presence feel inappropriate or uncomfortable.

The one hiccup is the larger drawing in the center of the wall opposite the entrance: it looks over-curated, and it pauses eye movement. It would fare better in the spatial no-man’s land adjacent to the rear door where it looks like Bohl ran out of drawings to display. Regardless, the drawings serve two purposes: to lead the viewer around the perimeter of the gallery visually, but also as a track to move us along, in order to hear all the nuances of a multi-channel sound piece. 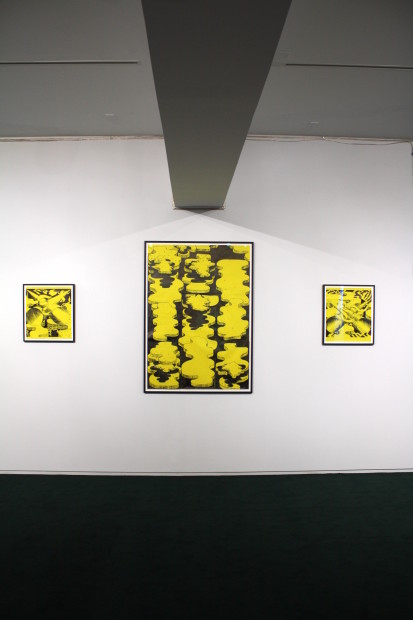 With its looping sound piece amounting to 49 minutes, Early Awnings feels as much like a filmic soundtrack as it does a typical sound installation. As we round the drawings and circle the sculpture, we’re taken on a lightly cacophonous journey that undulates between a disoriented awakening, a courtly celebration, and nauseating yoga tones. It doesn’t take much meandering to realize that the red sculpture isn’t the only speaker system: Bohl and Tcherepnin have strategically placed speakers under the awnings they’ve created, which double as sculptures and sound projection systems. 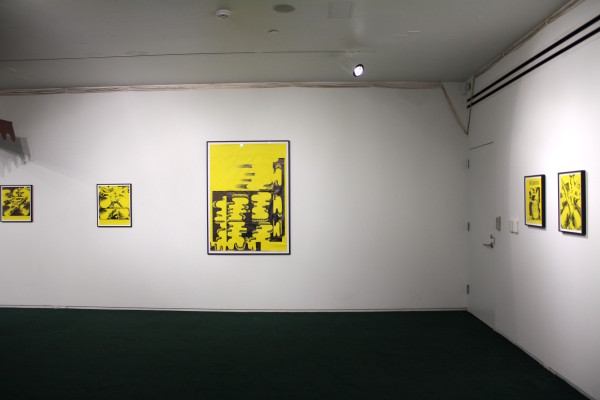 Hiding speakers under the awnings was a smart move for a couple of reasons. The varied sonic sources both lead and disorient the viewer. But there’s also a particularly thunderous track that, when it emerges, feels like someone is crashing large pieces of metal within the walls. There’s no way that track could have been as forceful emanating from the center of the gallery. And the awnings don’t just make the sound trick more successful; they also command their own presence as sculptures, although with varying degrees of success. 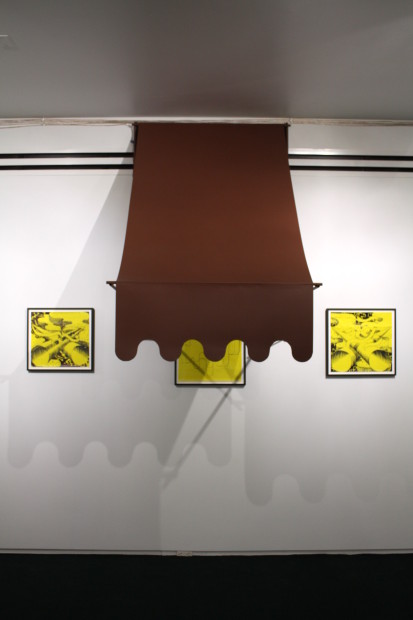 Bohl and Tcherepnin claim the awnings function as framing devices for the drawings, but given their repetitive sameness, which drawings they’re framing and why seems totally arbitrary here. The one exception would be the maroon awning that frames—but also covers—the most sparse drawing in the series. Not more than a few marks outlining Bohl’s recurring curvy islands, it looks like a rough draft or prototype—a drawing the artists can’t decide whether to hide or draw special attention to. In this instance the awning blocks our vision, but once you step inside it, the experience is both intimate and claustrophobic. So the less functional the awnings, the more effective they are. The aforementioned maroon awning hugs and entraps the viewer; several others barely jut out from the wall, feeling shallow and disturbingly vapid. Two others, neither extending too far from the wall nor keeping too close to it, do nothing and are boring. 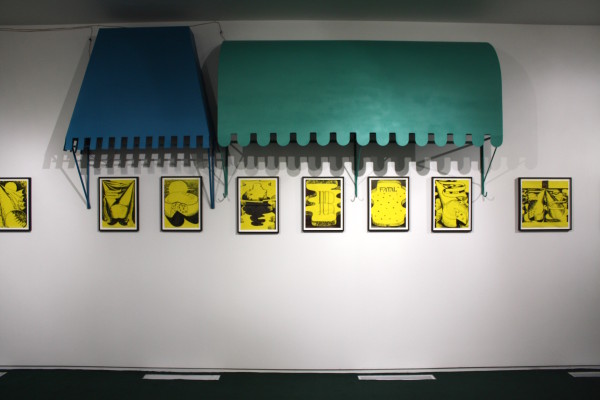 And while there are a couple of moments of unintentional boredom in the show, there’s a more purposeful ‘boredom’ employed by Bohl and Tcherepnin to enormous effect, which is color choice. The awnings are mostly muted primary colors, and the carpet is a severe moss green that flits between a flattened lawn and domestic interior space. The colors feel dull, overbearing, and soulless, lending to a creeping sense of insipid oppression lingering in the regularities of everyday life.

But most terrifying of all is not what Bohl and Tcherepnin have done to the space but what they haven’t: They left the walls white. As the drawings, the awnings, and the carpet reside in the space as blocks of color, so do the white walls. While typically neutral, the walls here come into play in stark yet banal contrast to the bold carpeting, and as awnings normally function as transitory spaces to buildings or doorways, here they lead to white oblivion. The awnings feel like a stage set for nothing, a meaningless background, as if an embalmer drained all the blood out of a sunrise or someone took white-out to any sense of civilization or humanity—with the exception of a monotonous ticker tape of yellow warning signs.

Early Awnings is on view at the Blaffer Art Museum at the University of Houston until September 5, 2015.