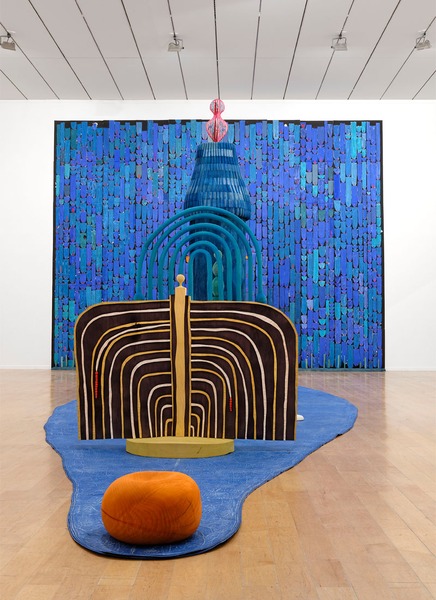 A woman cranes her neck upward, a vulva-esque flower rising like a phoenix between her breasts. We see her collar bone; the curvature of her shoulder slowly melts into and becomes trapped within the face of a man. She doesn’t seem to mind, however; her eyes are shut in ecstasy, her lips upturned towards a not-yet-erect penis. Salvador Dali’s The Great Masturbator (1929) is only one of many examples of the Surrealist impulse—revolutionary, dream-like, psychoanalytical at the time, yes—to implicate women as little else than muses, as symbolic fodder for their collective erections. 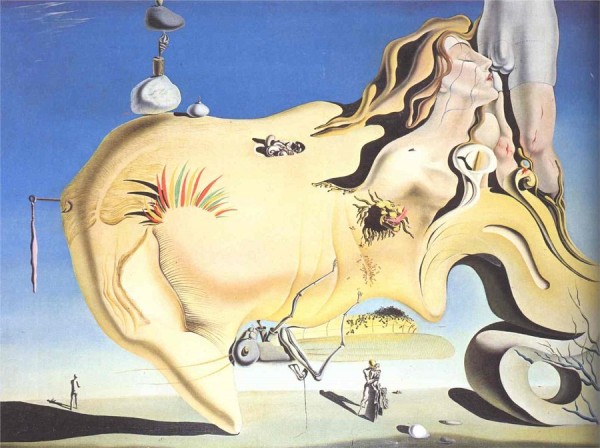 In The Destruction of the Father (1974), by Louise Bourgeois, we become immersed in a ceiling and floor of bulbous protrusions that read as breasts and butts. Our eyes fall to the focal point of a dinner table, following a narrative arc of a father murdered, dissected, and consumed by his daughter and son. This iconic work served Bourgeois as a feminist prototype, sparking a generation of women to assert some visibility in a male-dominated art world. 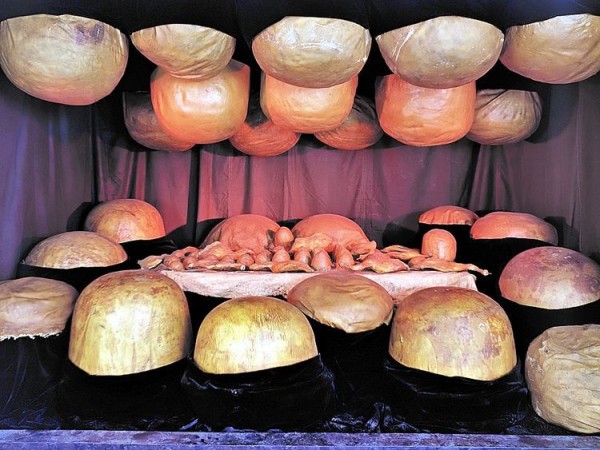 Louise Bourgeois, The Destruction of the Father, 1974

I bring up these two artists because so much of Matthew Ronay’s self-titled exhibition at the Blaffer Art Museum in Houston revolves around the symbolism inherent in the work. Whether it’s the Dali melt or the labial Bourgeois stack, Ronay tosses out what he blanket-terms “Surrealist conventions” with formal acuity, but also benignly in the name of investigation and play. Upon viewing the overwrought symbolism rampant in this exhibition, I couldn’t help but think of Claire Bishop’s critique of Dahn Vo’s work at the Venice Biennale: “So why does Vo’s success make me feel uneasy? In part, it has to do with the artist’s use of history and the way in which his poetics of the past is prone to devolving into information as ornament.” My problem here is not that the work is light and playful; it is that Ronay so casually references such immensely fraught symbolism in the name of play—so much so that I wonder if the Blaffer and perhaps Ronay himself are more preoccupied with his colorblindness than the historical implications of the work. 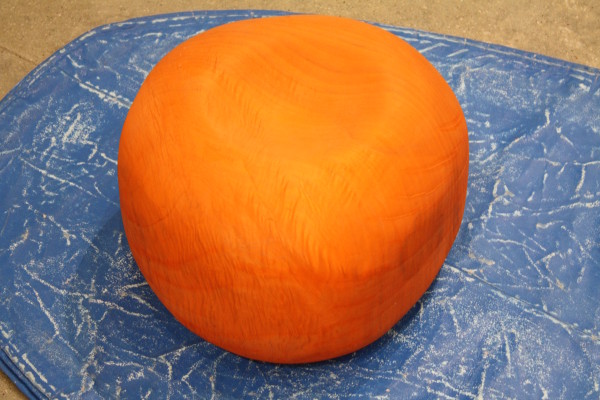 We feel this most poignantly with the first large-scale installation the viewer encounters entitled In and Out and In and Out, Again (2013). Our eyes immediately fling to the back wall as an orange triangular vagina holds center amid a gradient-bluish gouache waterfall of phalluses. As our eyes fall, a blue tongue juts out along the floor, holding several sculptures along the way, including Orange Discoidal at the tip, a hackey-sack-dimpled ball that could be an egg or a testicle. The installation and sculptures rely on clear gender codes: pinks, oranges, and yellows are assigned to the feminine as blues and greens point to the masculine. Beyond the backdrop, Penis Dwelling and Three Stretching Posts (2013) dominates the room, a blue columnar mushroom cock ejaculating a pink cloud of “I Dream of Jeannie” splendor. 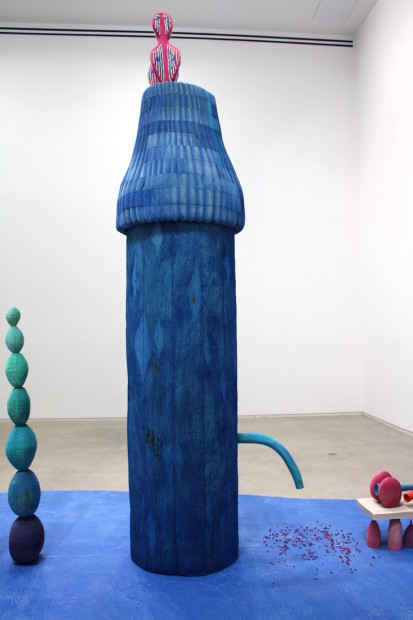 To be fair, Ronay at times attempts to mitigate reductive penis-in-vagina notions of sexuality by incorporating sexually ambiguous, or sexually simultaneous imagery. We see this in the aforementioned ball/egg Orange Discoidal, and we see it even in Penis Dwelling and Three Stretching Posts, as the phallus has a vagina of its own facing the back wall. But the vagina serves little function other than a portal for yet another penis emerging from its hole as it hovers and ejaculates Skittle-like pebbles onto the floor. So as In and Out and In and Out, Again purports “a state of sexual coexistence, where male and female shapes are embedded in or define each other in tenuous states of dualism… ,” I can’t help but wonder: “a state of sexual coexistence” for whom? 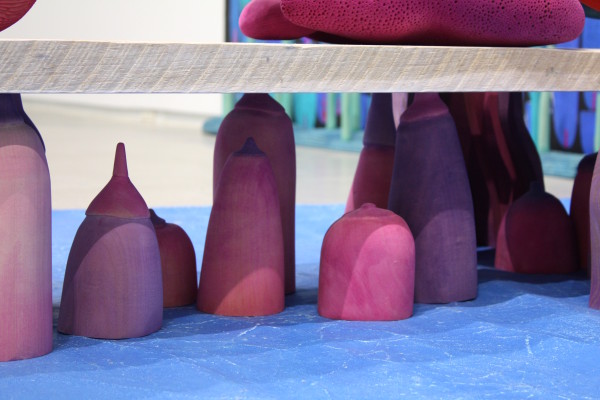 It’s not that Ronay’s work should be sexually inclusive. It’s that much of his symbolism parrots the misogynistic tendencies inherent in Surrealism with little to no critical inquiry. The natural curvature of the wood in Wavering Body (2013) gets to the heart of the elements of surprise, investigation, and juxtapositions in Surrealism that I think Ronay is truly after, as the wood intertwines like intestines and interlocks in a loving embrace. But the landscape of breasts trapped underneath the board, their erect nipples literally holding up the board from underneath again harkens to the easy symbolism of Surrealism’s most insidious stereotypes.

Moving through the rest of the exhibition it becomes clearer that the problem is less with the individual sculptures and more with Ronay’s self-curatorial decisions. Ronay does a disservice to his work by lumping many of his sculptures together in a larger installation, prioritizing theatrics over formalism and craftsmanship, which is where he really shines. This is most obvious in the final room where he has altogether abandoned the installation format, opting instead to group autonomous sculptures together at various heights. Here Ronay is more generous, giving the viewer space to breathe, to take time to forge one’s own connections without being bludgeoned over the head with symbolism. 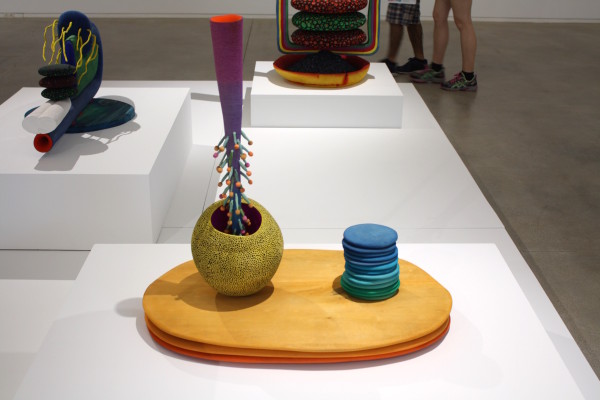 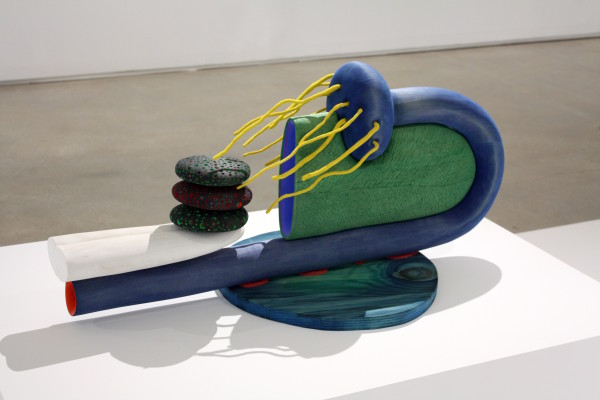 Pore Bearer and a Space/Duration Column (2015) looks like a radioactive branch docking inside cavernous sea coral. Plantlike and impossibly colorful, the piece doesn’t simply point to but instead embodies eroticism, its spiky phallus invoking the liberation, violence, peace, and fear inherent in the kind of vulnerability that can be manifested in sexual intimacy. Hollow Blue Proboscised Member/Green Sucking Pouch (2014) reads as a kind of cartoony leaf blower, anthropomorphized yellow tentacles desperately groping for the pock-marked disks within its grasp. Here, in isolation, with physical space and with subdued symbolism, Ronay provides us with the most generative experience, which is letting the viewer participate.

Matthew Ronay is on view at the Blaffer Art Museum in Houston through October 1, 2016.