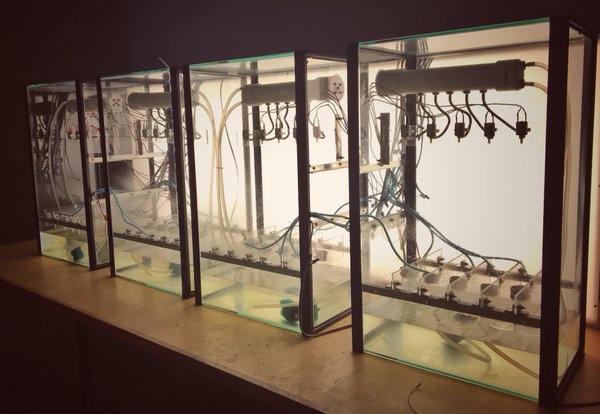 The Blaffer Museum’s downtown gallery space Window Into Houston is in itself a kind of installation. Consisting of only a storefront window, it diverges from the monastic white cube format. And for better or worse, we are thus forced into a kind of separation that inevitably colors our perception of the work it showcases: we encounter its art through a lens of commerce and insatiable desire—an encased, glorified novelty item we cannot access.

However, Jeff Shore’s and Jon Fisher’s most recent effort, Drip Machine (2016), fits comfortably within Window Into Houston’s limitations as a venue. In fact, notions of physical separation, desire, and commerce enliven and complicate the work rather than paint it into a corner. With Shore as the sculptor and Fisher the sound artist, their collaborations usually end up as Tinguely-esque contraptions emanating ominous tones. And while these works often command attention from multiple angles (even when mounted on the wall), with Drip Machine we’re relegated to one, shifting our consideration of it in this context from a sculpture to a piece of cinema.

But it’s as if the film is on permanent pause, except for a narrative arc driven by a musical score derived from the machine itself—as each water drop falls from its valve, it strikes a note which emanates from speakers overhead. Because the drips are unpredictable, the sound piece continually evolves, resulting in a cacophony that can be playful, irritating, romantic, and even banal. Because of our distant physical relation to a static sculpture and a self-generating score that somehow feels boring and dangerous at the same time, it’s easy (and exciting) to get swept up in this story line and to project our own onto it.

So where does Drip Machine take us? If Stanley Kubrick and Michel Gondry had a lovechild, he’d concoct something like this. Perhaps most striking about the work is not the piece itself but rather its background: a glowing white light box. Over-saturated, imposing light—a Kubrick staple—looms here like a quiet antagonist. The whole installation inevitably becomes enmeshed with archetypes regarding the color white, such as death and rebirth, the unknown, the void. So our perception of this machine shifts from it being an innocuous sound producer to it being a hermetically sealed protector from (or victim of?) whatever sits behind that blinding sheet of light.

And then we look up. Bound wires fall diagonally from a black ceiling, splitting off individually to their respective points of entry into a metallic apparatus that reads like a row of post-apocalyptic cow udders. It feels cold and dispassionate, to be sure, but the intentionally naive DIY aesthetic makes it equally silly and charming, as if it were all made by a stoned mad scientist tinkering in his basement. And now as we watch these valves dribble water into the aquarium vats below, we can’t help but believe that the real function of the machine is nourishment and rationing.

If we lived in Drip Machine’s world, would we be dying of thirst? Would we dunk our heads into the pools of water, or would we patiently, pathetically crane our necks, mouths open to catch every drop? Would we feel that sharp ping of metal on our tongues as we wait? It being confined in a storefront window only heightens our desire to explore it. The music of Drip Machine is only one of many parts of a whole, a whole that transports us elsewhere both despite and because of the lens separating us from it.

Drip Machine is on view at Window into Houston through April 27, 2016.