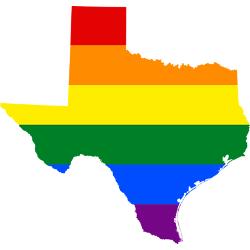 Who in Glasstire territory (that’s Texas, natch) is getting married? Whose existing marriage is now recognized in Texas? Gay or straight, and gettin’ hitched in solidarity or at long last? We’ve seen some things on social media that we’d like to post, but we don’t want to speculate or announce things ‘off the record’… . Who’s attending a ceremony? Who’s an ordained Universal Life minister and can do the hitching?

Rick Fredetick and I got our liscence and marriage certificate June 26, six years and a few weeks after our wedding. Making us the 8th officially recognized “gay marriage” in Bexar County.