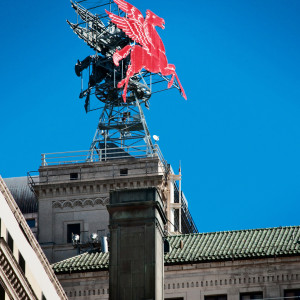 The 2000 replacement, soon to be joined nearby by the original.

The giant rotating red Pegasus sign at the top of the Magnolia Hotel in downtown Dallas is the second one to fly in that spot; the first one, installed in 1934, was retired in 1999 and has since moldered away in a couple of different storage sheds until developer Jack Matthews and the late Jeff West decided to track it down in 2012 (they did) and refurbish it to the tune of $200,000.

The dimming, two-sided original was replaced atop the Magnolia Building (once the headquarters of Magnolia Petroleum–later Mobil Oil–and  in its day the highest skyscraper in town) with a brighter, shinier version in 2000, which is still in action. But finding the (appx) 40 x 40 foot original, restoring it and reinstating it downtown, this time on top of a 60-ish-foot high platform in front of the Omni Hotel, sounds just fine to us. It’s being installed over the next couple of weeks. The more Pegasuses (Pegasi? Pegusea?) around here, the merrier.

Dallas Can Sleep Well Tonight Under the Bright...