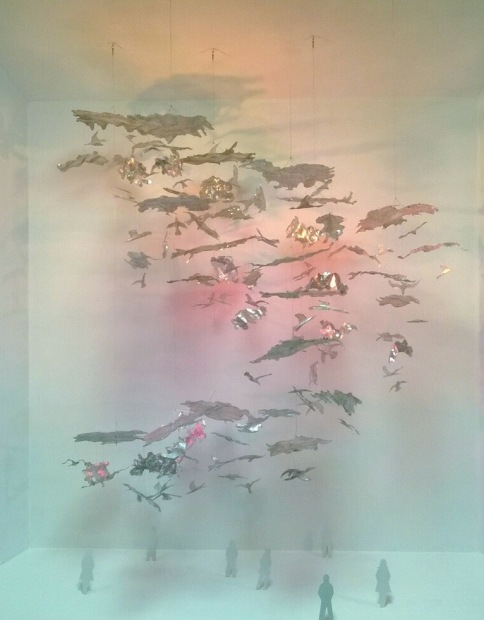 Houston artist Ed Wilson has released pictures of his proposal for the George R. Brown convention Center in Houston. The 90 x 90 x 40 foot atrium will be filled with shiny metal clouds and cutout birds.

Wilson was scheduled to give a talk at his solo show, “One-Offs” at Fl!ght gallery in San Antonio’s Blue Star Arts Complex at 3 p.m. on Sunday, November 30. But it has been cancelled, he says, “because he needs to be in Houston right now.”  He may appear via Skype.

Normally, it would be the closing of Wilson’s retrospective, but the artist is at the center of a struggle within the Houston Arts Alliance, which withdrew a proposed contract with him for an $830,000 sculpture commission last week, leading the the resignation of HAA’s Civic Art and Design Director, Matthew Lennon, in protest. 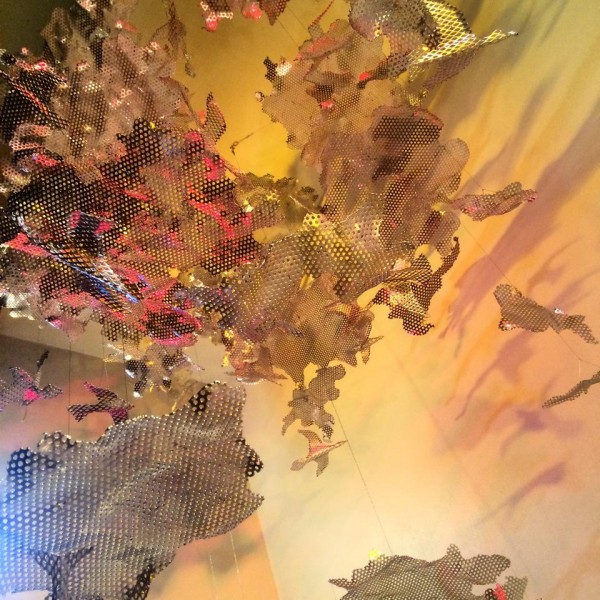 I have only a few left but will be ordering more. The point is to show respect and support for Ed and the other artists who relied on the HAA for a clean decision.

Cameron will be getting some more “ED” uttons made and I will will be passing these out on gallery walk night from my gallery this Saturday December 6th. we are also making an “ED” button logo jpg to place on website and Facebook. I am encouraging everyone who cares about this to replace their facebook self portrait or image with the image of the “ED” button, so that we are all “ED” I hope this goes viral and demonstrates that is not always power and money that rule the day.

ED buttons will be available at various art openings and events this weekend, including on Colquitt St this Saturday.

Ed is a wonderful, brilliant artist, as well an incredibly good man. I have two wonderful pieces of Ed’s work, a tree lamp and a boat called “ship of fools”. Am guessing the folks who made this terrible decision are the real “FOOLS”!!!!