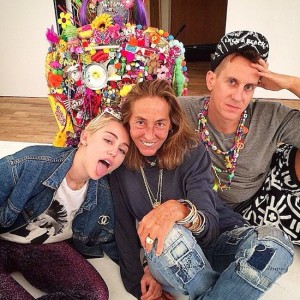 After a whole two and a half months of making what NYMag.com calls “neon stoner-meets-summer-camper collages and jewelry,” Miley Cyrus will be exhibiting her work in an exhibition called Dirty Hippie. The work will be featured in Cyrus’ collaborator and fashion designer Jeremy Scott’s NY Fashion Week show tomorrow, and then will be on view at the gallery in the offices of V Magazine (11 Mercer Street, NYC) starting September 11.

While many eyes may be bleeding from excessive rolling, her interview with V Magazine includes some sentences that sound similar to statements from many young, hip-but-incoherent artists. Below are some excerpts, which could well be cobbled together to create…

“This seems so fucking lame to say but I feel like my art became kind of a metaphor—an example of my life.”

“Everything just kept shitting on me and shitting on me. So then I started taking all of those shit things and making them good, and being like, I’m using it… So, that’s how I started making art. I had a bunch of fucking junk and shit, and so instead of letting it be junk and shit, I turned it into something that made me happy.”

“This fucking banana was a hamster toy at Petco and I bedazzled it.”

“They say money can’t buy happiness and it’s totally true. Money can buy you a bunch of shit to glue to a bunch of other shit that will make you happy, but … obviously the shit you buy doesn’t make you happier because I’m sitting here gluing a bunch of junk to stuff.”

“I just sit around and smoke weed anyway, so I might as well sit around, smoke weed, and do something. And this is me doing something. I love it. I mean, I’m up until seven in the morning doing this stuff all the time. It was much weirder when I started doing it while I was sober.”

But I don’t see any scatalogical content in her work as reflected in the “artists” statement .

That statement is at least a c in art school.

as an art teacher, i feel disgusted. not only that miley thinks that gluing pony beads onto a stick is art….but also at the gallery. both of whom are in it for the attention .
there are so many true artists out there who put so much of their blood sweat and tears into their craft, working for many years not just a few hours, to create somthing for the rest of us to experience and admire. it’s just my opinion but i’m not interested in the “shock value” .

What if she turns out to be a really good artist? Would anyone be able to tell?

Maybe the Dallas Contemporary will give her a show