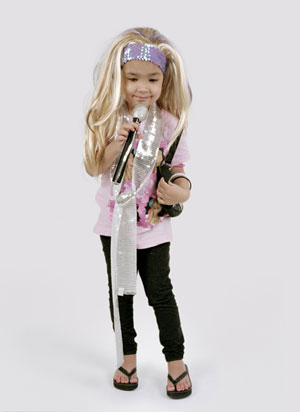 Photography’s treated pretty indifferently in the gallery scene around here. With a few exceptions (Amy Blakemore and Dana Harper are the only ones with longtime representation I can think of right off hand–but please, correct me if I’m wrong), straight photography doesn’t get too much play in Houston, and when it does, it’s relegated to specialized venues. The Houston Center of Photography and Fotofest are great, but it’s always seemed weird to me that photographic images — whether analog, digital, or digitally manipulated — are a bit alienated.

I’m not sure why this is, when Juergen Teller, Chris Verene, Reineke Dykstra (sp), Thomas Struth, and a zillion others are showcased along with every other painter and sculptor in every gallery in Chelsea. I imagine that just like everything else, it has more to do with brisk trade than actual quality. I bet if photography and video actually sold we’d see a lot more of it.

Thoughts about relegation and commerce-induced alienation encompassed me as I exited Beauty Knows No Pain, an exhibition of images by O. Rufus Lovett and Leah DeVun at The Houston Center of Photography. First, if I had not read the press release on HCP’s web site, I never would have concluded that the works by Lovett and DeVun belonged to the same exhibition. Lovett’s black and white images of the legendary Kilgore Rangerettes are great, no doubt. The Kilgore Rangerettes themselves are great. But when the show, according to the web site, “[borrows] its title from the 1972 documentary by Magnum photographer Elliott Erwitt and the famed slogan of the Kilgore Rangerettes” and “addresses the performance and perception of femininity in contemporary American culture,” and then proceeds to lump the works of Lovett and DeVun in the same category, it does a disservice to both artists — especially DeVun. 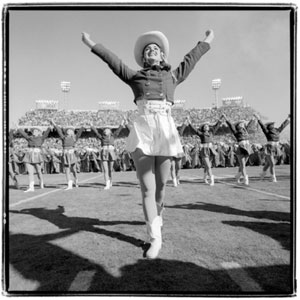 Lovett’s work has that classic Friday Night Lights feel, and its observations do address the perils and pressures of being female. But because of its retro subject matter (admit it: the Rangerettes are as current as the Rockettes), and because it is in black and white, it doesn’t seem to address contemporary American culture — female or otherwise — at all.

DeVun’s work, in contrast, feels very current. These stark studio portraits are of girls, aged four to eleven, who have dressed themselves as the pop tv/singing icon Hannah Montana. Apparently, these are the duds they wear to her concerts. Juxtaposed against an Avedon-esque white ground, the girls — mostly chubby, cross-eyed, and awkward — sport what I assume are Hannah Montana official wigs and plastic microphones (also photographed individually in their cheap cello-wrapped glory) and strike a pose.

It would be careless to say that the parallels drawn between the two bodies of work were inconsequential. The seeming perfection demanded of a Rangerette, a baton-twirling member of the drill team, or a cheerleader has always been daunting to most females. But does the fact that girls are daunted by mostly out-of-reach ideals of femininity really bring out what is most important about the work of these artists? Sure, the Rangerettes look like Stepford Wives in short skirts and cute pony boots, and that’s probably not a great thing. And while the influence of popularized notions of beauty in DeVun’s portraits is undeniable, the juxtaposition of the artists’ work in Beauty Knows No Pain removes the complexities of the issues on both sides. 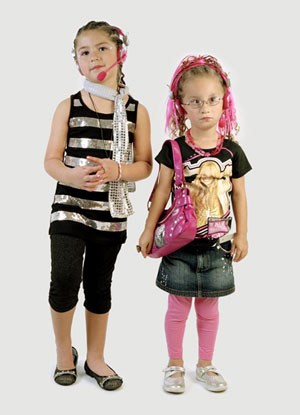 Girls everywhere are influenced by stupid pop sensations like Miley Cyrus (aka Hannah) — just look what happened when she showed up in that soft-core cheescake photo a while back — and no doubt it warps their individual growth and dooms their self-esteem. But Rangerettes, cheerleaders, and their ilk are, when you think about it, pretty amazing athletes. They’re disciplined, and they know the meaning of cooperation and teamwork. What the hell do Miley Cyrus, Britney Spears, or Madonna teach people besides self-absorption, narcissism, and materialism?

But the fact that DeVun’s subjects are little fans-in-training struck me harder than the more obvious gender message. In fact, the consumerist issue troubled me way more than the feminist one. The fact that these girls are empowered enough to convince their parents to cough up the dough for this crap — and that the corporate minds behind operations like Disney have convinced parents that these are images to be emulated (see Disney’s response to the aforementioned cheesecake ) — is, well, enough to make a paranoiac like myself start wondering if they’ve put something in the water supply.

But commercialism isn’t aimed just at little girls. The fairer sex may trot around with more glitter and bling adorning her carcass than her male counterpart, but the market makes little boys feel just as inadequate if they’re not fully equipped with all things macho.

To push DeVun’s works into the gender-box is easy to do, and, of course, gender issues are there. But why pair it with another body of work that raises a completely different set of gender issues, from a completely different aesthetic and philosophical point of view? Why narrow the meaning by labeling it feminist without acknowledging a more complex concern? Why place it into a corner relegated solely for photography or a feminist critique when it’d probably receive more attention from critics and the public if we stopped pigeon-holing it and just called it art?