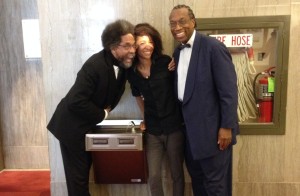 Ivy-League fixture, philosophy dynamo and prominent activist Dr. Cornel West was in Dallas on Friday, June 20, and paid a visit to local conceptual artist Lauren Woods’ permanent installation, titled Drinking Fountain #1, in the Dallas County Records Building. West was in town to speak about race inequality and social justice issues at a gathering of Mothers Against Police Brutality hosted by Friendship-West Baptist Church.

Woods’ Drinking Fountain #1, unveiled last November during the city-wide commemoration of the Kennedy assassination, is a screen smoothly built into a working water fountain; it plays footage of historical civil rights protests when you bend down to take a drink. The Records Building installation is in the spot where, when a metal plate fell off the wall near a water fountain in 2003, a segregation-era “Whites Only” sign was revealed.

For the informal press event, Woods was on hand to greet Dr. West, along with Dallas County Commissioner John Wiley Price.