Established as an unassuming literary collective in 2000 by Sehba Sarwar and four other women writers, Voices Breaking Boundaries (VBB) met once a month in the back of a Houston bookstore. Within two years it became a non-profit and eventually morphed into the impressive organization it is today: a multicultural respite and stage for writers, filmmakers and artists that produces readings, workshops and exhibitions, usually centered around issues of social justice.

VBB is best known for its living room art production series, which each year fashions interdisciplinary exhibition spaces out of one or more houses in a different Houston neighborhood. The most recent iteration, in May, was Crossing the Lines, much of it taking place in one historic home in the Near Northside. 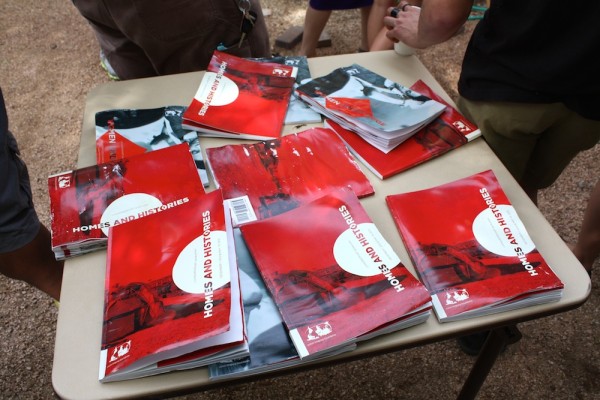 For this year’s installment, curators Sarwar, Rob Block, Jimmy Castillo, Michelle Garcia, Karen Martinez, and Monica Villarreal invited local and international artists to interpret the title as it relates to them personally, politically, or socially; the issue at hand was “borders and barriers.” The results were diverse and numerous—on the day of the exhibition, the house at 415 Quitman was packed with live music, spoken word performance, photographs, video installation, lectures and site-specific sculpture.

Socially active pop-up exhibitions that encourage attendance by locals who might not otherwise visit museums or galleries are important in a sprawl like Houston. A diverse big city needs art and language that reflects culture back onto its population, and it’s smart of Sarwar to use a single house or neighborhood as a microcosm of global issues. It makes issues that can feel elusive or loaded more tangible and accessible, and allows passersby, residents, and others who may feel intimidated by a white-cube gallery setting, a chance to roam in and out, socialize, and encounter art forms and political issues that they may not otherwise get a chance to engage with very often. 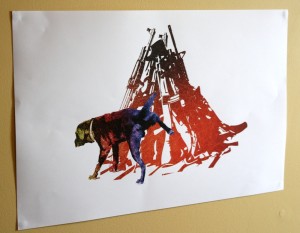 There was a lot going on in Crossing the Lines. Between the efforts of six curators and fifteen artists/collectives, the house was overflowing. Given the sheer amount of work and onslaught of performances (and having only three hours to digest it), this viewer was forced to make a choice: either do a superficial fly-by of everything, or spend more time with a few of the pieces at the expense of others. It’s definitely exciting to experience a multitude of art forms under one roof, but VBB could pare down the amount of work and the number of curatorial hands influencing it. 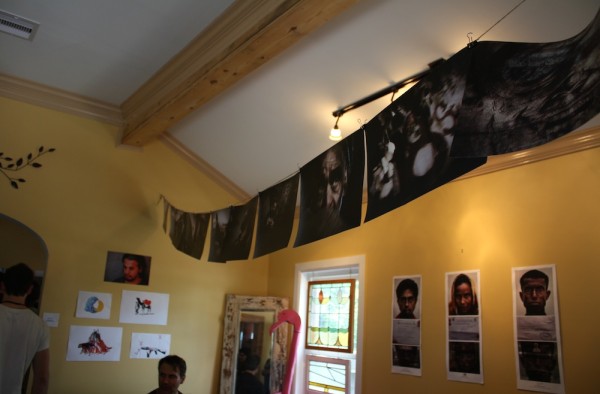 The piece that I focused on most probably also suffered most from the overstimulation: it was Portland-based Pakastani artist Sabina Haque’s Crossing the Line: 1947 Partition of India. A one-room installation of large prints, a bed, maps of India, and a 20 minute sound piece simply requires more time from viewers than they can spare in a noisy, demanding, distracting environment. 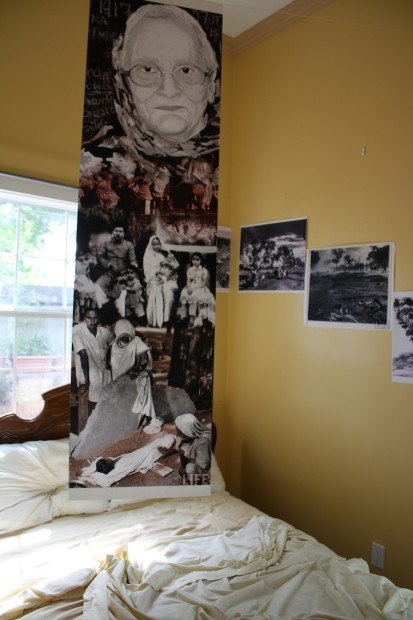 Too many people popped into the room for about fifteen seconds, spun their eyes around once, and promptly headed to the backyard for a beer or the next performance, which is a shame because the historical subject matter in 1947 Partition is fascinating. To wit: when Great Britain ceded colonial power over India in 1947, religious and ethnic tensions mounted between Muslims and Hindis, resulting in a mass migration of the former to what is now Pakistan and the latter to India. It was a horrifying, violent, and deeply traumatic population shift, with ethnic cleansing and the slaughter of men, women, and children on both sides. Numbers vary, but an estimated 15 million people were displaced and half a million people died either from the violence or complications during travel. 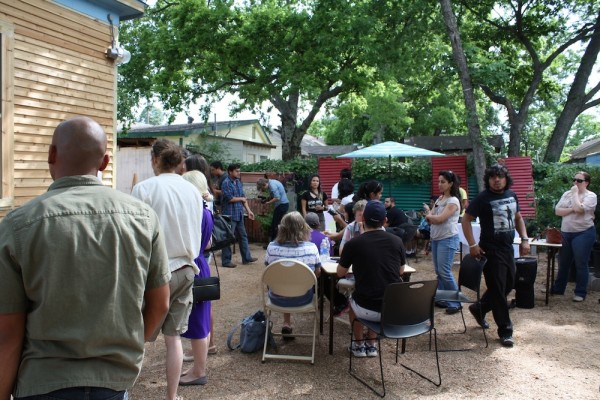 But despite these mind-boggling statistics and the fact of it having been the largest recorded mass migration in history, Haque asserts in her exhibition handout that no memorial or official historical record of the Partition exists. A group in Berkeley called The 1947 Archive is working to change that, by collecting first hand accounts by eyewitnesses, or second-hand accounts by their relatives.

The sonic component of Haque’s installation was made up interviews from the Berkeley archive. As voices echoed, viewers could study the printed banners hung from the ceiling at various angles. Slick and densely layered, they incorporated images: of people migrating,  grief-stricken victims, Ghandi, and maps. Most of the layering was flattened and neutralized in grays, yet threads from each map popped out as urgent reds, simultaneously functioning as pathways, arteries, and spiderwebs: Haque’s attempt to ensnare the willing viewer within the narrative. (However, if Haque was asking the viewer to consider her prints as sculptures, she focused too much of her attention on their two-dimensional delivery. They read as merely banners.) 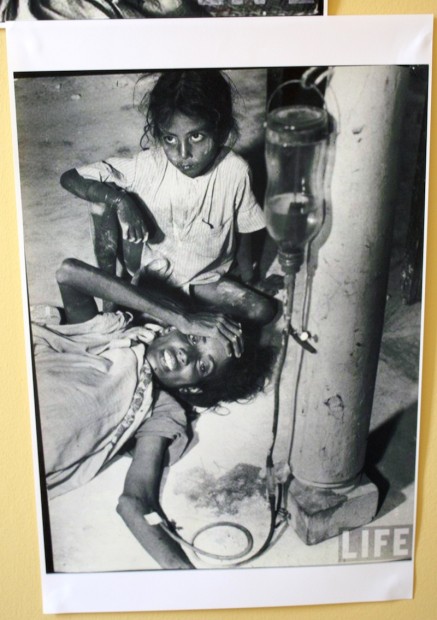 The real crux of the work was in the audio—pained and earnest, voices reverberated throughout the room as ghosts recalling what was likely the most traumatic experience of their lives.

While some of Haque’s decisions were overly theatrical, like the torn map of India sitting on the nightstand, others were intelligent. But the room choice (perhaps a curator’s decision?) was smartest of them all: a modest bedroom bathed in muted yellow tucked in the back of the house. As sunlight peered in the window from the late afternoon, the room felt like it harbored secrets. A slightly disheveled bed with head indentations in the pillows enhanced an uncomfortable and jostling sense of fear and nostalgia. 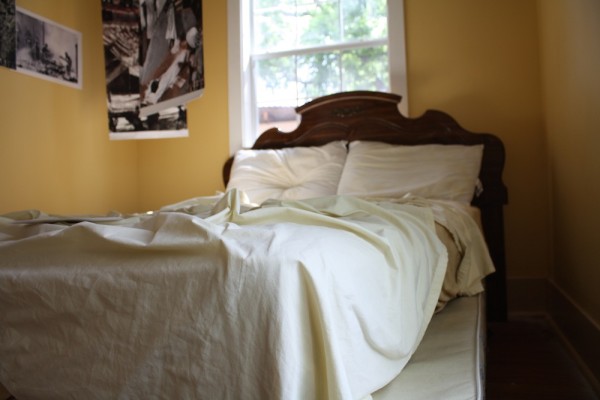 In the end, though, Crossing the Lines as an immersive experience probably pulled its best moments from its most straightforward and attention-grabbing offerings, the performances. Samhita Sunya played a raga she had composed on the sitar. (A raga is an Indian musical tradition in which a set of musical notes provides the framework for improvisation.) As she sat in the shade, on a city street in the middle of a mildly hot Houston afternoon, it felt like a form of rare and honest reflection. Sunya’s interpretation was sincere and sad; it was as if she was mourning the impending death of the day.

The music, mixed with the sound of passing traffic, formed an unexpected symphony, and in that moment, more than any other, Crossing the Lines illuminated the cultural complexity of shifting boundaries and our city. How lucky anyone would be to chance upon Sunya’s melancholy interpretation of an afternoon, on any afternoon. 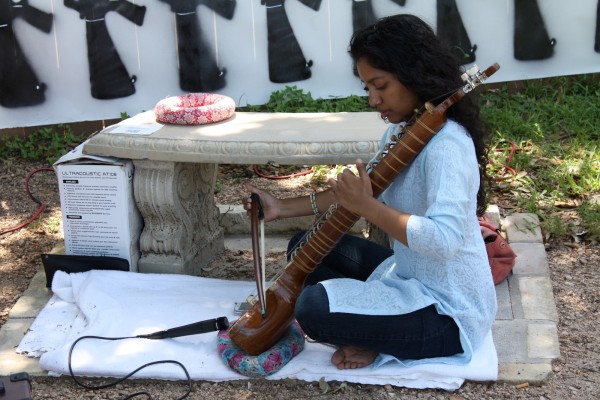 Crossing the Lines, organized by Voices Breaking Boundaries, happened on May 17, 2014, in an historic home at 415 Quitman St. in Houston.