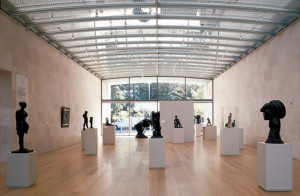 In addition to the ten public sculptures throughout Dallas, ambitiously commissioned by the Nasher Sculpture Center in celebration of its tenth anniversary, the Nasher has also announced that it received an unprecedented number of important gifts in 2013 that have been added to its permanent collection.

The gifts include works by artists David Bates, Tony Cragg, Raoul Hague, Thomas Houseago, Dr. Lakra (Jerónimo López Ramírez), James Magee, Claes Oldenburg, Jaume Plensa, Sterling Ruby and Peter Voulkos. The two works by David Bates will be part of an upcoming career survey of his work, jointly presented by the Nasher and the Modern Art Museum of Fort Worth, which opens February 9.