Magic and enchantment usually stay tucked away in the realms of childhood. Fairy tales and storybooks contain places where the unexplained is proposed as not only a possibility but also an elusive reality, mysterious yet real. This wonder and sense of discovery reappears in Between Blinks, a small show at Epitome Institute in San Antonio by Callida Borgnino.

Borgnino takes images from nature and transforms them into magical complexities. The pieces include digital photos on canvas, two framed photographic prints, and series of six small framed photos. Borgnino digitally manipulates many of her images so that they appear like a Rorschach inkblot: one half of the image is symmetrically mirrored to the other, creating the illusion of a whole image. In these mirrored composites, a cloud becomes a creature, a ray of sunlight becomes a golden halo, and images of faces appear in the negative space between the branches and leaves of trees.

While digital prints on canvas can be cheesy and commercialized, Borgnino’s use of the medium keeps this at bay. She has also painted onto the printed canvases, and designed them in an unpredictable format. For example, in Floaters, a pair of long, rectangular canvases hung above eye level, the digital image is not printed all over but instead runs across the bottom and top thirds of the canvas.

Borgnino’s digital prints are either manipulated or contain embellishments, both subtle and not, and the content and style of art has a playfulness about it. 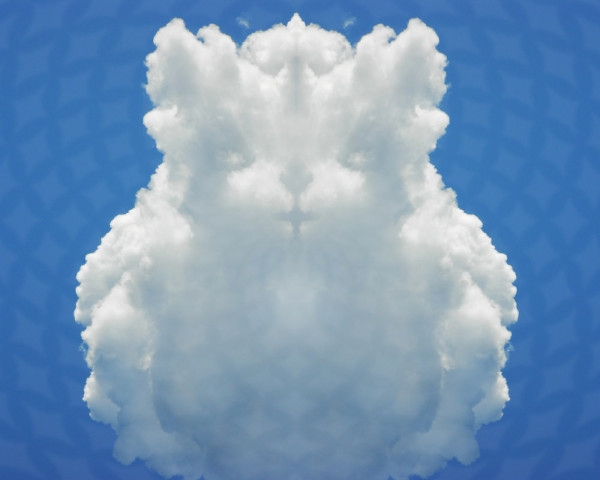 For example, Beast A and Beast B are gold-framed images of a puffy white cloud against a blue sky. But the cloud is more than a cloud. Through the subtle shading, as well as the shape and contours of the cloud, the details of a face and ears appear, with a funny little feline nose and mouth. The scenes encourage careful looking, like the feeling of looking at a book by Jan Brett or Peter Sis. In them, some important discovery or clue is waiting there for you and you just have to keep looking until you find it. Between Blinks is a wooden log, made strange by its Rorschach treatment, and the fact that it is suspended in a blue sky dotted with clouds, surrounded by treetops. The gnarls and knots of the wood become a fascinating maze of possibilities. In the center, the way the mirrored image comes together creates a horned skull design. Borgnino highlights certain areas with gold paint, teasing the mind and eye further into the image.

In reality, there’s no one specific thing waiting to be found, but it’s the package, the entire process of relating to the art, that gives you this feeling. Looking at Borgnino’s images, I can’t help but relate it to theories of the mind and how we experience phenomena. Her artist statement anticipates this. It is both serious and funny, and in the spirit of the Epitome Institute itself, in which the building and the two women who run it all have alter egos and an imaginary archives, a playful send-up on the self-importance of the artworld. Borgnino’s opening sentence asks:

“Is it reasonable to suggest that humanity may not yet be able to integrate images undergoing an evolutionary restlessness, universal in experience, perceived through shared joys and discomforts, finding a psychologically neutral way of repeatedly triggering the ecstatic state of mind in which contact with a unique place in nature and time determines the depth of a vision, virtually the same over thousands of years, untroubled by the migrations and epidemics that occasionally disrupt the private mental experience?”

It’s the kind of writing that you have to read over several times just to make sure you catch the meaning. The process is not unlike looking at her images. I scan the six prints of Cedar Chiasma, wondering if it’s really all the same print, or if I’m missing something, like the game on the back of a cereal box. Cedar Chiasma is a Rorschach image of treetops, and in the place where the image is mirrored, the tree branches form a mischievous-looking face and head, like the spirit of the forest has been personified. The golden halo arcs above as if to mark this appearance.

What happens between blinks? Borgnino’s subject matter plays on the concepts and process of perception itself. Growing up and no longer believing in magic, faced with the flat, matter-of-factness of existence, the more investigative and philosophical of us may turn to studies such as phenomenology, looking deeply inwards to understand what specifically is. The idea of intentionality is big in phenomenology, and in this art is a window into the artist’s imagination (which all art is) but, in this case, it feels like the viewer is being led down the strange, bizarre maze of invention, where fleeting thoughts flicker like a lotto machine and the art featured happens to be the image we landed on. The elements of chance and randomness exist just by the very nature of the subject matter. Borgnino works with anonymous sky and tree photos that could be anywhere, and yet it is because she has picked these subjects and made them into something more that gives the sense of surprise, like the sensation that we have overlooked something that was there all along, if only we had known to look a little harder.

Hurry! Callida Borgnino: Between Blinks will be on view at Epitome Institute through January 6, 2014

omg..so glad to see a show with Callida!….love her work and own a coveted piece I purchased at Sala Diaz…A grape-esque haired creation..Last time I saw her she had informed me that upon hearing I was selected for the 2000 Whitney Bienniale she had decided to quit making art…..that broke my heart……Glad she didn’t let my undeserved achievement get in the way. In a weird gemini /Roershack bifurcated way , I totally understand her point of view . !!!!xoxox