There is only a week or so left to catch Andy Rihn’s Texas’ Longest Hammer Choir, the “psychedelic worksong, film and denim-heavy installation experience” at Austin’s MASS Gallery. As part of the exhibition’s send-off, the gallery will be holding something called “Texas’ Dankest Stump Tourney + Artists & Crew Talk” this Saturday evening. 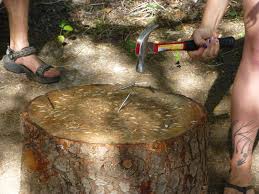 stump tournament? It could be a denim trivia contest. It could be the obscure beer-drinking game in which players attempt to drive each other’s nails into a tree stump with a hammer that is first tossed in the air for a full revolution, caught, and brought to bear on the stump, all in one fluid motion. Or, it could be something else altogether, but it starts at 6 pm. Austin artists who use their hands may be making a lot of conceptual art for the next few weeks.