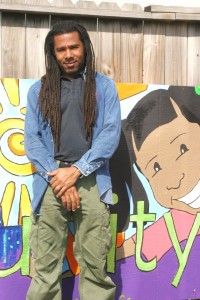 Houston artist Reginald Adams, co-founder and president of the Museum of Cultural Arts Houston (MOCAH), made national news this past year as the painter (and, by necessity, re-painter) of the midtown Obama mural. Adams is in the press again, this time for his portrait of country music superstar Blake Shelton, created out of sugar. It’s a sweet story, but it seems an odd choice.

The folks at Imperial Sugar wanted to honor the singer for a shout-out in his hit song “Boys ‘Round Here,” in which Shelton sings the line “shaking that sugar sweet as Dixie Crystals.” (Dixie Crystals Sugar was acquired by Imperial Sugar in 1997; Imperial Sugar is based in Sugar Land—hence the city’s name, just outside of Houston.) Imperial Sugar contacted Adams, known for his brilliantly colored tile mosaic and painted murals around Houston. Tile mosaics can’t be all that different from working with sugar varieties: granulated, light brown, dark brown and turbinado.

It seems the challenge of the medium, rather than a Blake Shelton adoration, is likely what attracted Adams to the project. He diplomatically states, “I like all types of music,” adding, “I’d heard of Shelton before, seen him on The Voice.” Has Shelton heard of Adams yet? “He’s on tour,” says Adams, “but it’s been delivered to his studio in Nashville.”

Here’s a time-lapse video of the portrait in making:

That song and its video are awful: http://www.youtube.com/watch?v=JXAgv665J14