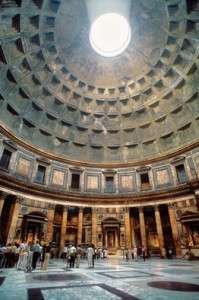 Wall Street Journal Leisure & Arts features editor Eric Gibson, in a fit of summertime art history 101, re-explains why the Pantheon, built in the second century AD by the Emperor Hadrian, still matters. Besides being the only major work of Roman Imperial architecture still intact and the largest masonry dome ever built, the singularly ungainly exterior of the building, a kind of half-completed merge between a Greek inspired gable-ended temple and a squat rain barrel, the famed building conceals what Gibson rightly calls “the greatest interior in Western architecture.” (A distant ancestor of the Astrodome, the structure includes a hole in the ceiling, although even the Romans couldn’t figure out how to grow grass inside.)

Outsourced and Upmarket, Sayeg Continues to Cover the...