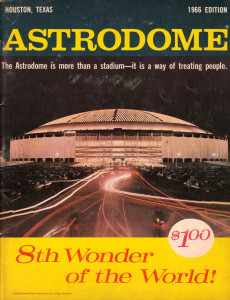 With less than two months before voters decide whether to approve the $217 million in bonds to turn the Houston Astrodome into a gigantic convention center, a new political action committee has formed and joined forces with preservation groups. They are launching an educational campaign, plan to hold town hall meetings, and have started a Facebook page with nostalgic photos. If the ballot measure fails, the dome will likely be torn down.

The Architect’s Newspaper (AN) has now announced an “Astrodome Reuse Design Ideas Competition.” It is unclear what effect yet another call for ideas would have on the election or the fate of the dome, but dome lovers just can’t stop reminiscing and reimagining. In the competition description, AN writes: “While AN supports the fact that steps are being taken to save the dome, we feel that the current proposal can only be made better by an infusion of fresh ideas.”

AN has partnered with the company YKK AP America, who will be giving cash awards to the winning entries, and they have rounded up an impressive group of jurors. Submissions are due October 1, but entrants must register by Tuesday, September 17.