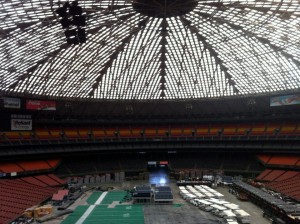 “Forget Monticello or the Chrysler building: There may be no piece of architecture more quintessentially American than the Astrodome.” That is how Christopher Hawthorne, Los Angeles Times architecture critic, began yesterday’s essay on the historically famous Houston dome. But Harris County voters did not agree. In yesterday’s elections, the referendum that would have authorized bonds to turn the stadium into a giant convention center and exhibition space failed to pass.

In a Huffington Post/AP article, Harris County Judge Ed Emmett said the stadium’s future was pretty much sealed with the referendum’s failure; there are no other plans to revamp the stadium. Beth Wiedower, of the National Trust for Historic Preservation, one of the groups that promoted passage of the referendum, said this was the end of the Astrodome. “We’re discouraged and saddened this icon is lost,” she said.

“Even if its attitude toward the environment now strikes us as deeply naive,” wrote Hawthorne in his essay, “the Astrodome deserves to be protected simply as a singular monument to the American confidence and Texas swagger of the 1960s.” The “Eighth Wonder of the World” will now likely be razed within a few months.