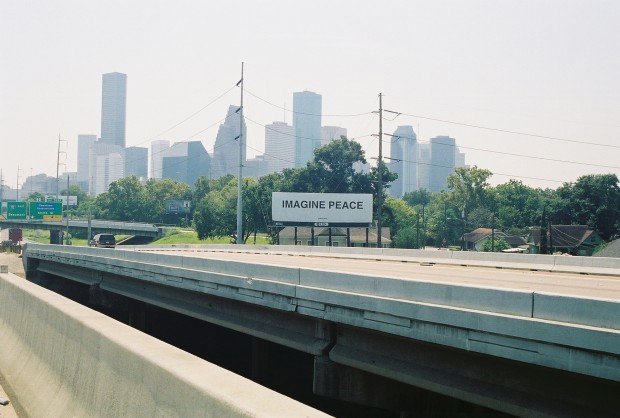 Remember the IMAGINE PEACE Billboard along I-45 north just before I-10?  It was an artwork by peacenik Yoko Ono, brought to Houston by Deborah Colton gallery. Now, for the anniversary of 9/11, it’s coming back. The 14×48 foot command will occupy the same freeway-side billboard as before, and will be unveiled September 6 in conjunction with Colton and Farb Gallery’s Positive Perceptions show, which begins September 10.

The IMAGINE PEACE billboard first came to Houston September of 2006 in conjunction with the Colton Gallery’s WORD show; within days, the press was all over it, and many people wanted to make it a permanent installation.

For Ono, it’s an ongoing campaign: in 2007 she unveiled IMAGINE PEACE TOWER, in Reykjavik, Iceland. She participated in the opening ceremony for the 2006 Winter Olympic reading a poem calling for peace in the world.  Her Wish Trees are installed in different cities all over the world, asking  audience members to contribute their wish to help heal our planet. Eventually all of the wishes from Wish Trees will be collected and they will be incorporated into IMAGINE PEACE TOWER in the future. There are now over a million collected wishes; presumably in a warehouse somewhere, like  us, waiting.

i saw this getting on to 45 what a great piece of work.

I really hope it can stay. We need to Imagine Peace!