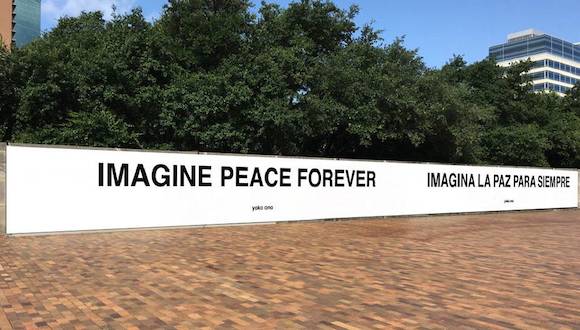 In the aftermath of the Dallas police shootings last week, Gavin Delahunty, Senior Curator of Contemporary Art at the Dallas Museum of Art, was searching for works in the museum’s collection that could respond to the feelings of loss and sadness permeating the city. He ended up reaching out to artist Yoko Ono to, per the DMA, “lead the city in a message of harmony.”

Ono responded by recreating her 2001 text-based artwork IMAGINE PEACE, which was initially inspired by John Lennon’s song Imagine. In light of the Dallas events, however, Yoko changed the text to read IMAGINE PEACE FOREVER. The text piece is printed both in English and in Spanish on a banner that will hang on the museum’s Ross Avenue Plaza until August 22. The museum offered some insight into the work:

Its basic black and white palette promotes positive change, connecting with its viewers directly in a call for peace on many levels: in your own being, in your relationships, in the city, and globally. The Dallas Museum of Art hopes to inspire individual empowerment, as Ono profoundly believes we all have the power to create positive difference in the world.