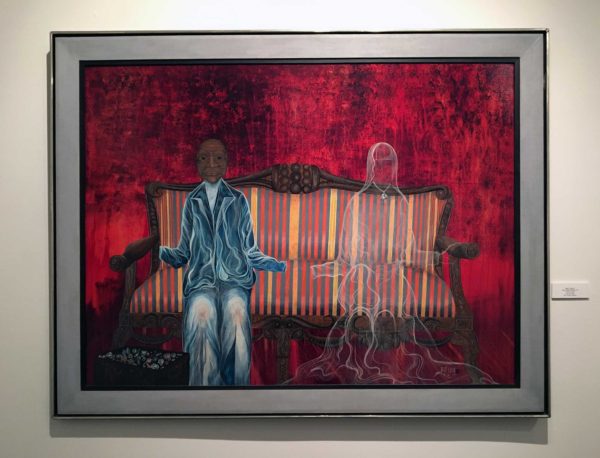 What to make of Bert Long? The Houston painter, sculptor, former executive chef and all around life force, who died in 2013, is about as deeply embedded in the history of Texas and Houston art as anyone. He was included in Fresh Paint: The Houston School, Barbara Rose’s iconic 1985 survey of Houston painting. In 1990 he was among 25 artists to win the prestigious Prix de Rome.

Looking for the Right Time, a small survey of Long’s paintings, drawings, prints and assemblages at Deborah Colton Gallery in Houston, mounted in conjunction with the publication of The Artist’s Journey published by the Houston Artists Fund with a long, historical essay by art historian, teacher and critic Thomas McEvilley, provides an opportunity to revisit the work and life of one of the many artists who contributed to the foundational strata of the Houston art world. 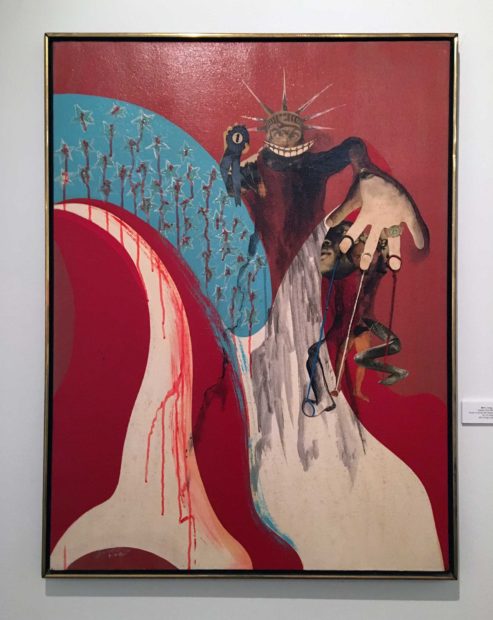 Every good artist is, in some way, an autobiographical artist. In Art as Experience, the pragmatist philosopher John Dewey describes the act of making art as a process that takes matter and filters it through personal experience to create new forms. This is a generously loose formula and makes room for virtually any material or form—even non-material and ephemeral forms—but the centerpiece of the axiom that remains immutable is the transformative power of personal experience.

In The Artist’s Journey, McEvilley quotes Long as stating that “our jobs as artists are to paint what we come in touch with and help other people diagnose the ills of society. Once we diagnose them we can cure them.” This definition of the artist situates Long squarely within the mythology of the heroic artist who sacrifices his personal identity and privacy to the collective consciousness of the society in which he lives. 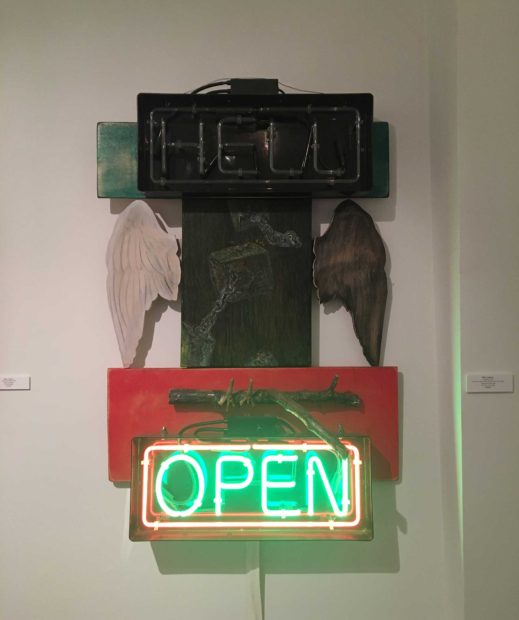 It’s a bold declaration of universality when an artist believes that by mythologizing his own life, he is mythologizing all human life. But this is exactly what the autobiographical artist, and Long himself, essentially claim. It takes a precise mix of ego and humility for an artist to identify himself with all people and to assume that by building an entire iconography around his life and experience, he’ll have something enlightening to say about human existence in general. It takes a kind of faith to believe this sort of thing and, as far as I can tell, it’s an essential ingredient in the production of art.

Long has this faith. Whether this kind of belief results in fortune or folly is mostly beyond the control of any individual artist. Much of Long’s legacy relies on a combination of a vast, idiosyncratic, sometimes profound, sometimes humorous body of objects and the force of his remembered personality. Anyone who knew Long (I didn’t) will attest to the uplifting power of his personality. But personality and memory fade. McEvilley’s book and the work of Long’s archivist Pete Gershon will go a long way to further cementing Long’s impact on not only the Houston, but the American art narrative.

One of the most important questions to ask about an artist when looking back on a closed oeuvre is what kind of general character the work possesses? What’s the general thrust of the artist’s personality, his way of being in the world? The world, in all times, is pretty much a shitshow and an artist’s style is always a clear indication of how he manage the mess—with a laugh, a sigh, or a groan. 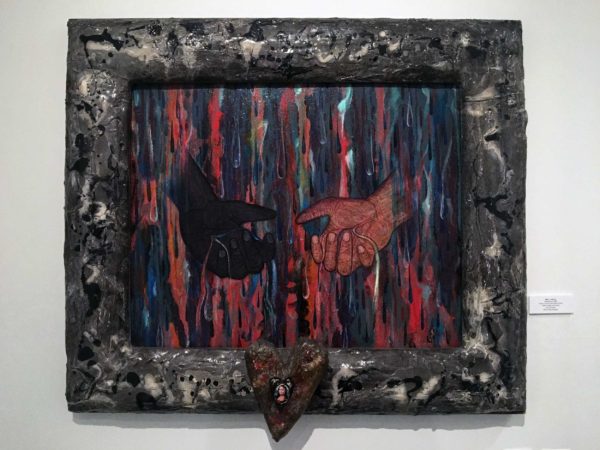 Whether humorously mocking the stupidity of the KKK in performances with fellow Houston artist John Alexander, or painting an absolutely sincere image, like Brothers in the Colton show, in which black-and-white hands open at the wrists to reveal blood vessels that contain the same blood, Long demonstrates a transcendental idealism that, honestly, is difficult for me to understand.

So let’s locate Long’s work art historically. McEvilley does a convincing job of situating Long’s work within the larger context of the surrealist Southeast Texas art that saw its most widespread exposure with the rugged assemblages of Robert Rauschenberg and coalesced around, but predated, the arrival of the de Menil family in Houston and the long tradition of self-taught artists that comprise the richest vein of Southern American art. 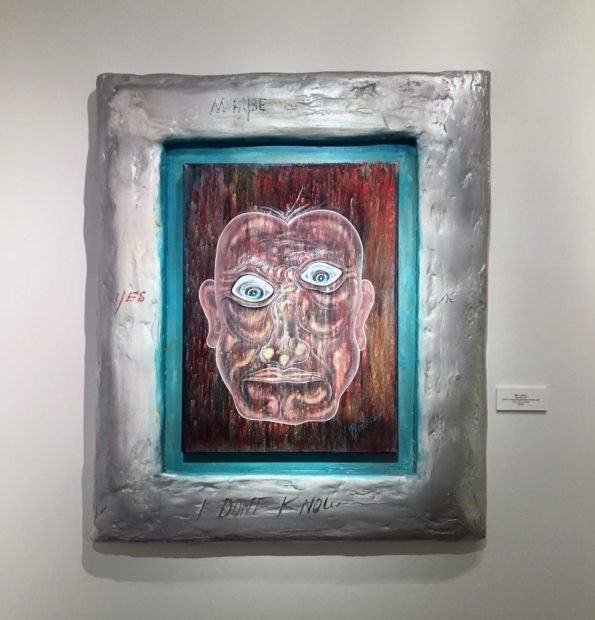 Long was almost entirely self-taught but his work is saturated with references to the Western European art tradition. In Art/Life, a 30-foot long mural in the Looscan Neighborhood Library, Long situates a complex personal narrative set in shark-infested waters under the sign of influences like Rembrandt, Picasso and Warhol. Both Brothers and Art/Life seem almost naïve in a current social environment that sees black and white, East and West as diametrically and possibly permanently divided. I prefer Long’s universalist vision to a more recent vision that tends to view most claims to universality as suspect at best and insidious at worst. 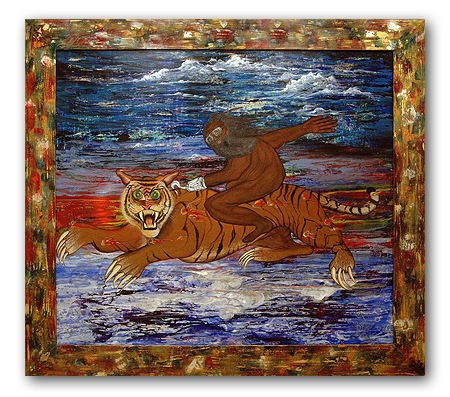 I like to think that I am, above all, a formalist. For me, if artworks are unable to convince me of their formal integrity, I am usually unwilling to invest myself in their narratives. But just as a certain kind of formal proficiency is often present in the absence of any deeper spirit, so too can deep spirit exist in forms that are sometimes unconvincing. I’m not always persuaded by Long’s skills as a painter or sculptor, but the forms he has created over the long course of his career as an artist add up to a mythology that is greater than the sum of its parts. Riding the Tiger, one of Long’s more well-known paintings, depicts the artist naked, grey beard and long hair trailing behind him, as he rides a ferocious tiger across a stormy landscape. Perhaps Long’s exhibition, and McEvilley’s book, will convince a new generation of Houston artists that framing their own lives and work as acts of heroism might not be such a bad thing.