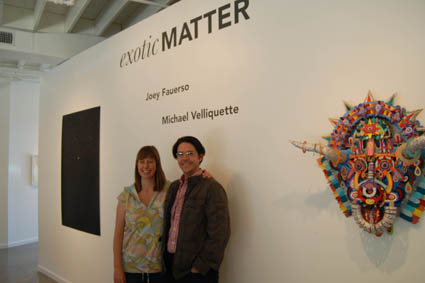 They have flown The Bower, but Joey Fauerso and Michael Velliquette have reunited for “Exotic Matter” at the David Shelton Gallery through May 8. Fauerso explores the existential human condition in her cosmic figurative paintings, while Velliquette is making exquisitely detailed masks and totems using the child’s craft of colorful cut construction paper.

After meeting in graduate school at the University of Wisconsin-Madison, they moved to San Antonio, where they opened The Bower in Southtown in 2002. Located in a restored 1940s art moderne shopping center, across from the Buddhist-meditation Shambhala Center, the second floor gallery had a living space they shared. In the gallery, they presented shows by friends from Wisconsin as well as Texas artists, while establishing their own art careers.

“We didn’t show our work at the Bower, because we wanted the gallery to be taken seriously,” Fauerso said. “But we’ve shown together before. Some people might think our work is poles apart, but I think we share a lot of the same concerns.” 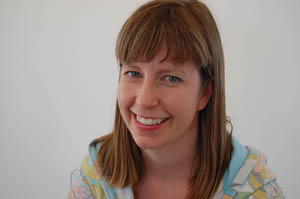 Currently on the faculty at Texas State University in San Marcos, Fauerso was born in San Antonio. Since being featured in “Come Forward: New Emerging Art in Texas” in 2003 at the Dallas Museum of Art, she has exhibited widely, ranging from “New Texas Painting” in 2005 at Houston’s Diverse Works to upcoming shows at Chicago’s Western Exhibitions and Parson’s University-Paris. Currently in San Antonio, along with this show, she’s featured in “Amalgamations 25” at the Blue Star Contemporary Art Center and “One for All: Contemporary Perspectives on the Figure” at Trinity University.

After spending a few months in Roswell as an artist-in-residence in 2004, Fauerso created an animated film involving hundreds of still portraits of a male figure based on a family friend, which debuted in “Wide Open Wide” at Women & Their Work in Austin in 2006.

Among the signature works from that series is an image of a man’s face with his wide-open mouth filled with stars, as well as a field of stars in the shape of a mouth. In much of her work since, she has been investigating the place of the human spirit in the universe, and the universe contained within the vessel of the human body.

“Some of the new work in this show relate to the star mouth,” Fauerso said. “There are celestial bodies in the watercolor series ‘27 Qualities of the Unified Field,’ which is inspired by the music my father wrote for TM mediation. I am interested in forms that are interrupted or acted upon by the picture plane.”

“27 Qualities” resembles a series of chunky star maps on stained paper, the geometrical forms suggesting seams and folds in the universe. Her manipulation of the dimensions of space can be seen most clearly in “Broken Field,” an angular fragment of floating green grass with what appears to be a sinkhole or maybe a wormhole opening in the interstellar lawn. An opened-mouth, probably screaming, man’s head appears trapped on the horizon line between the night sky and a black void in her darkest painting, “Feel What It Feels Like.” 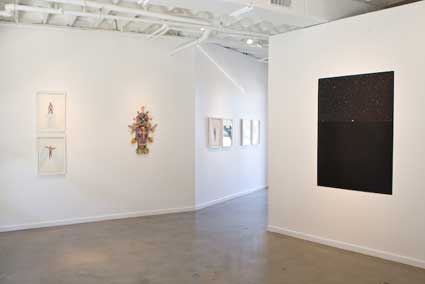 The Falls, Springs (l), Feel What It Feels Like (r)

In most of the smaller works, the male figure occupies a spare white metaphysical space. In “Curtain,” the figure was painted first and then the top half of the body was smeared with a blue wash, which Fauerso wiped with a cloth, obscuring the form into abstraction while creating a kind of ghost image. A nude man appears to fly like an angel or perhaps hang from a cross in “The Falls,” his arms held aloft by sheets of water. A gush of water, ominously reminiscent of a mushroom cloud, pushes a kneeling man into the sky in “The Springs.”  A man appears to be skiing inside a neutral triangle outlined by rainbow colors in “Electric Field.”

“I wanted to show the environment acting on the figure,” Fauerso said.  “It’s a metaphor for the transience and instability of life. You just can’t hang on to things too much.”

Velliquette, who’s moved back to Madison, has refined his cut-paper technique to dazzling virtuosity, creating richly detailed and multi-layered creations informed by his study of masks from around the world and devotional objects, especially Tibetan. Along with this show, his work is featured in “Psychedelic: Optical and Visionary Art Since the 1960s” at the San Antonio Museum of Art and “Slash: Paper Under the Knife” at New York’s Museum of Art and Design. 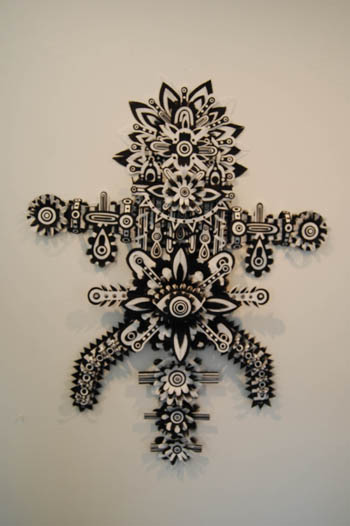 For a 2004 Artpace residency, he created a fairy tale fantasy in cut paper with all sorts of streamers, flowers and other handcrafted paper objects. He then began to make elaborate collages that he framed. But a conversation with curator David McFadden at the Museum of Art and Design persuaded him to try to make stand-alone, three-dimensional, high-relief wall pieces. Building up layer upon layer of intricate cut-paper designs, his brilliantly colored works are made of heavy weight card stock and core board. While appearing 2-dimensional when viewed straight on, the masks actually stick out from the wall by several inches with more than a dozen layers.

“I use the board to build the understructure, and then build out the layers,” Velliquette said. “They’re built somewhat like piñatas. I found this system called sigils that I use for most of the compositions. I don’t consider my works magic, but sigils are an interesting strategy for making images. I want them to seem rich, unbelievably abundant. I had to let go of my perfectionism so they could get bigger.”

Sigils are magical symbols and signs, traditionally the visual representation of an angel or demon a magician can conjure. Velliquette follows a sigil system popularized by Austin Osman Spare for converting lines of text into abstract designs. He begins with an affirmation that he turns into a design, imbuing each mask or totem he creates with a positive meaning. But he also challenges himself to create more and more detailed works, applying the aesthetics of plentitude to increase visual density.

“Babboma” has buffalo-like horns, while “Heart Rage” is a Cyclops with fierce teeth. “Skin and Bones” is black and white, suggesting dancing skeletons. “Honored Soul” mixes multiple hues of yellow and purple. But you can also find elements of playful humor. “Seeker,” for example, appears to be the face of some god, but he’s sticking his tongue out at the viewer. 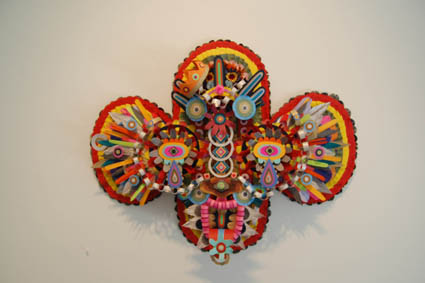