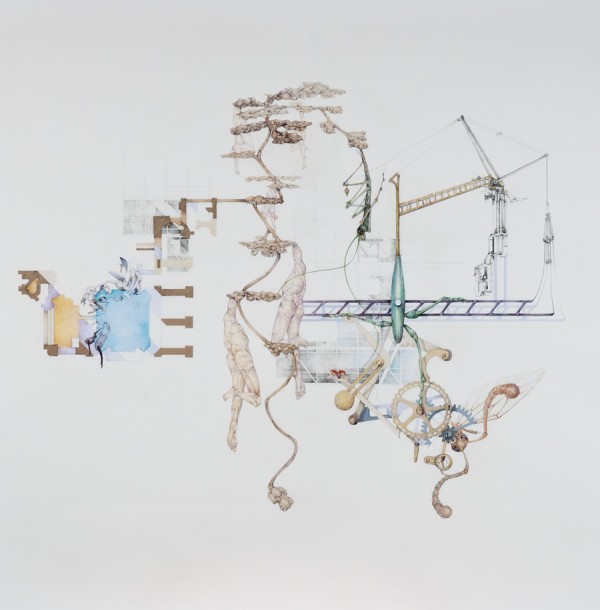 Providing a behind-the-scenes peek at the work of San Antonio artists, Donna Simon, a retired Brackenridge High School art teacher, conducts guided tours of the city’s studios, artist-run spaces, galleries and museums, which she organizes through her Web site at www.SeeingArtSanAntonio.com.

On a cold day in early December, she led a small group of art lovers on a tour of Jayne Lawrence’s drawing show “Subject Properties” (which closes Saturday, Jan. 7) at the David Shelton Gallery and the Zollie Glass Studio, the working studio for glass artist Jake Zollie Harper and wood artist Reagan Johns.

“After I retired from teaching, I wanted to stay involved with the city’s art community so I started the tours in 2006,” Simon says. “Despite the amazing art scene we have in San Antonio, I felt there was a strong disconnect between the public and the city’s artists. Most people don’t have access to artists’ studios. And I feel like one of the best ways to learn about artists’ work is to talk to them and ask them questions about their motivations. In many ways, I still feel like I’m a teacher.” Owner David Shelton greeted the tour group at his eponymous gallery located in a former convent on South Alamo Street in the King William neighborhood, next door to the Liberty Bar. Known for her elaborate drawings and sculptures that often merge organic and mechanical forms, Lawrence was on hand to talk about her work. She said her career as an artist may have begun with her father’s bedtime stories.

“He would ask me to pick three objects or characters and then he would tie them together into a single narrative,” Lawrence says. “So he would take a doll, a lady bug and a Tonka toy and put them into a story. I feel like that’s when I started putting disparate things together to make art.”

A mythical warrior sweeps across a child’s bed in a small drawing, “Through the Bedroom Window,” a dreamscape perhaps inspired by one of her father’s stories.

In the show’s title piece, “Subject Property,” headless humanoid torsos seem to be connected to a ladder, gear works, a metal crane, tree branches, giant seed pods, duct work and insect forms in a strange hybrid factory. Combining drafting techniques and freehand drawing, her work often appears to allude to a not-so-distant future when man and machine will merge. 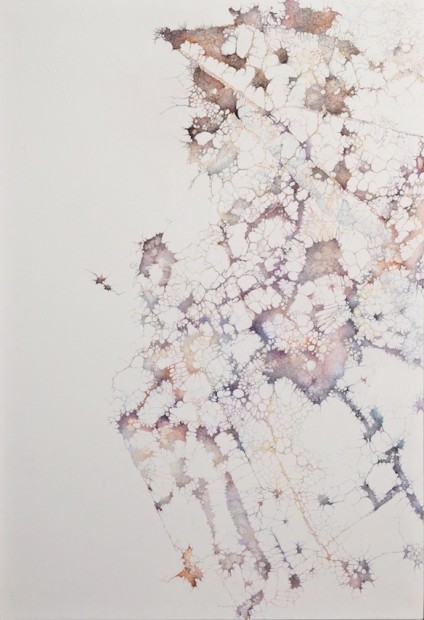 But other works are inspired by current events.  “Bloodlines” is a decaying leaf with delicate lines suggesting capillaries and fragile blood vessels overlaid on aerial views of downtown Manhattan and a sacred religious site in Iraq.

Lawrence, who teaches at UTSA, is a co-founder of the Cactus Bra Space, one of the city’s longest-running artist-run spaces. She started out in advertising at the Colorado Institute of Art in 1981 and attended the now-defunct San Antonio Art Institute in the early 1990s before earning a BFA in 1993 at UTSA followed by an MFA in 2000. 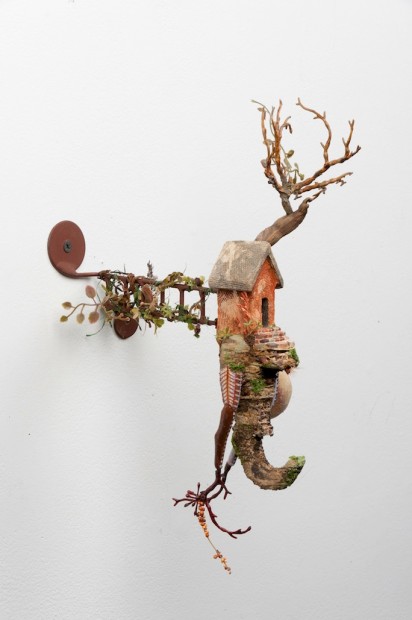 In addition to her drawings, Lawrence showed some sculptural wall pieces. “Katherine” resembled a small birdhouse with a tree, moss, brick steps and a giant grasshopper leg. 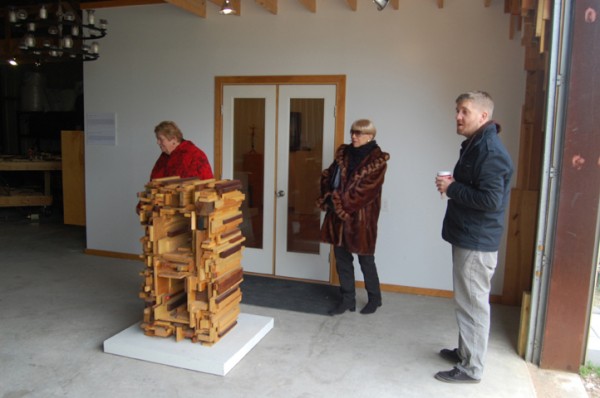 From the Shelton gallery, each member of the group took their own vehicle, including one woman on a bicycle, to the Zollie Glass Studio on South Presa Street in nearby Southtown. Simon provides maps, directions and meeting times for the tours, but it’s up to each individual participant to provide their own transportation.

Jake Zollie Harper had works from his “Airborn” series on view in a cozy gallery within the metal building that serves as his studio. Distinguishing himself from glass blowers, Harper demonstrated how he uses a gas torch to bend and shape glass rods. Modeled after bacteria or maybe atoms, the “Airborn” pieces feature glass rods extending from a central wooden  globe like miniature Sputniks. Harper said that he ran into trouble with his original title for the series when he installed the work at the San Antonio International Airport,” which made him drop the “e” from “airborne.” Apparently, there was some fear of even the faintest suggestion of biological terrorism. He created the work for Public Art San Antonio. 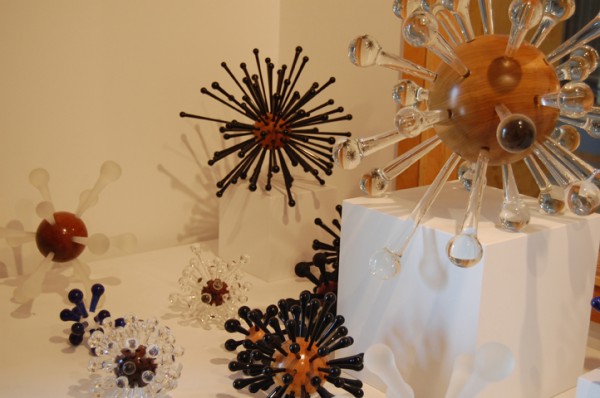 “I’m self-taught,” Harper says. “For the first three years, I just traveled around Texas and the West Coast studying techniques for making glass art. I would sweep floors and hang out just so I could learn. I got interested while studying photography at San Antonio College. It’s a pretty expensive investment, upwards of $350,000, to start a glass-blowing studio, while I was able to start doing my work in my garage. I began selling pieces during First Friday and things have just taken off from there.”

Simon organizes regular two-hour tours on Tuesday mornings and Saturday afternoons from October to May. She doesn’t like to schedule tours during the summer because so many of the artists’ studios are not air-conditioned. Regular tours cost $35, though she can also arrange private tours for groups of two to 15 people for a higher price that includes snacks and transportation.

A studio visit with painter Mira Hnatyshyn and a tour of “The British Invasion” exhibit at the Blue Star Contemporary Art Center are scheduled for Saturday, Jan. 14. The next Seeing Art San Antonio tour is set for Jan. 28 featuring a studio visit with watercolorist Ric Dentinger and a show at the Hunt Gallery with Doug Sweet, Janet Eager Krueger and Linda Morgan. 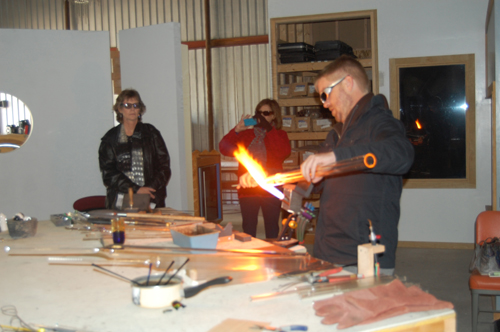 Dan,
Thank you so much for coming by! There seems to be a glitch. With all due respect, I never apprenticed at Garcia. I’m not sure where that info came from. Please contact me with any questions.
Thanks
Jake Z Harper
Zollie Glass Studio