Vincent Valdez at the Southwest School of Art & Craft 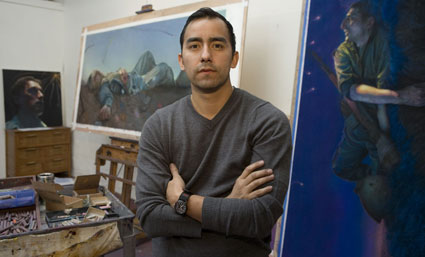 Vincent Valdez in his studio, 2009

A beautiful woman in sunbathing attire floats over the dark, glittering panorama of Los Angeles. The image is part of the diptych Wish You Were Here by Vincent Valdez. In the companion painting, a small bouquet of roses blooms over the nighttime San Antonio skyline. Marking 10 years into a remarkable career with his retrospective Flashback at the Southwest School of Art & Craft, Valdez is looking back and forward, trying to reconcile the traditions and family of his hometown with the temptations and rewards of La La Land.

Films, comic books, video games and Chicano noir have influenced Valdez’s style, which has a romantic, cinematic quality rich in texture and detail that goes beyond hyperrealism into something warmer, more emotional and maybe a little baroque, more the fantasies of 1940s Hollywood than the objective views of Richard Estes. Beginning as a mural painter on San Antonio’s South Side, Valdez earned his BFA at the Rhode Island School of Design in 2000 and attracted national attention with his painting of L.A.’s 1940s zoot suit riot, which was included in the traveling exhibit of comedian Cheech Marin’s collection Chicano Visions. Valdez moved to L.A. about five years ago.

“San Antonio and Los Angeles are like the flip sides of each other,” Valdez said. “The roses are from my grandmother, but L.A. is the sunbathing woman. San Antonio is much more personal; I have great respect for my home, my family, so I think my works about San Antonio tend to be more sentimental. Los Angeles to me is like “Bladerunner;” it almost feels like I’m on a different planet. At night, L.A. is glowing, pulsating with energy. San Antonio is solid and anchored, while L.A. is fluid and always changing. I’ve spent five years of my career in San Antonio and five in Los Angeles, so this show tries to bring them together. It’s all about balance.”

Collaborating with the musician Ry Cooder, Valdez created El Chavez Ravine, exhibited by the San Antonio Museum of Art in 2009. Valdez painted the story of the Mexican-American community displaced by the construction of Dodger Stadium, covering the sides and hoods of an old ice cream truck with the imagery. His artwork appeared on the cover of Cooder’s Grammy-nominated album. Also in the SAMA show was a towering triptych painting, Burnbabyburn, featuring the view of Los Angeles at night from Valdez’s Lincoln Heights studio. On the far right of the painting, a wildfire rages.

“Every night, I’d be walking back to my studio and see the city spread out like in the painting,” Valdez said. “I’ve been thinking about the best way to project the figure into the landscape, and decided that video might work better than painting.”

Valdez taped the nighttime view from his studio to use in a 22-minute video, Burn, with images of 50 Angelenos appearing to loom over the city landscape like giants. Using the horizon line almost as a stage, the ghostly faces and figures of the people Valdez filmed in his studio are superimposed over the nighttime sky, which is finally punctuated by a spectacular fireworks show over Dodger Stadium.

“Every Friday night, whether the Dodgers win or not, there’s a fireworks show,” Valdez said.

As part of his residency at the Southwest School, Valdez employed the people and cityscape of San Antonio to create a companion video, using a view of the San Antonio skyline at night. About 50 people appear in Valdez’s video, Recuerdo, ranging from his artist mentors Alex Rubio and Adan Hernandez to the rock group Girl in a Coma and perennial art patron and man about town Mike Casey. Also appearing are the South Side basketball team, a young Hispanic family with children, flamenco dancers, accordion players, a boxer and other figures from Valdez’s paintings and childhood memories. The people were filmed in front of a green screen in the back gallery where his show is, which was converted into a temporary video studio. Their expressions are solemn, like old-fashioned portraits, providing a feeling of melancholy as they pose, spin, dance and walk above the horizon line.

While his L.A. and S.A. paintings and videos provide a poignant contrast between his past and future, Valdez spends much of the rest of the show dealing with fighters and the experiences of a “universal soldier.” Valdez dedicated this exhibit to a childhood friend, 2nd Lt. John Robert Holt Jr., who’s seen in a small portrait wearing combat gear, his eyes red-lined and staring into the distance. According to Valdez, Holt made it back from Afghanistan but, suffering from post-traumatic stress disorder, he committed suicide after returning to San Antonio in 2009.

Valdez’s brother served as the model for a battered, beaten-down boxer—a symbol of human struggle—in Stations, a series of 12 large-scale black-and-white drawings marking the Stations of the Cross that debuted at the McNay Art Museum in 2000 and continues to tour nationally. His brother is also the model for Valdez’s “universal soldier,” who appears in a large-scale pastel diptych, I’m Your Brutha, from a Different Mutha. With his head wrapped in bandages, one soldier, possibly lifeless, is flat on his back on a hill in the middle of a battlefield, a burning jet streaking across the sky. The other soldier is resting on the hill in twilight, his dreamy face turned up to the stars, though a small fire burns on the distant horizon. Presented as mirror images, the two reclining soldiers quietly illustrate the life/death absolutes of war.

A video war game, Call of Duty, which shows combat through the eyes of a soldier, influenced Valdez’s action-packed painting Man Down! with a you-are-there perspective. Three soldiers hang off the fuselage of a Black Hawk helicopter as it hovers over burning Baghdad. Most of Valdez’s drawings and paintings have an intense cinematic quality, like stills from a movie, and this painting seems to suck the viewer into a deadly vortex of chopper blades hurtling toward a crash landing. For Valdez, it might be possible to make a painting as exciting as a video game, or at least as enthralling.

In the well-illustrated catalog, essayist John Ewing notes, “Like Goya and Manet before him, Vincent Valdez depicts war as a condition that elicits and reveals the extremes of humanity (a potential that cinema has long exploited).” But Valdez identifies with the warrior and relishes the challenge of proving masculine courage. Man Down! depicts not only “the horrors of war but also the rush of adrenaline in combat that sharpens the senses.”

Valdez looks back to older traditions in Simpler Times, a triptych depicting three boxers drawn from vintage promotional photographs, including a Mexican-American fighter with perfectly coiffed hair and “MANANA” written on the waistband of his silk shorts. Appearing to float in the clouds of this remnant of yesteryear is a cartoon-like sign reading “Times ain’t like they used to be.”

In his more recent work, Valdez shows that he’s willing to leave strict realism and the traditional rectangular picture plane behind to explore more symbolic, conceptual compositions along with more abstract, topical issues such as war and the environment. But there’s also the sense that Valdez believes the best possible future is most likely to be built on a foundation of time-tested values, the best of the past.

“Reclaimed: Paintings from the Collection of Jacques Goudstikker” at the
McNay