by Dan R. Goddard February 5, 2010
FacebookTwitterEmail
Disclaimer: I am so confused, do you go by Robert or Rob?
CLICK ON THE LINKS OR YOU MAY NOT GET THIS ONE AT ALL 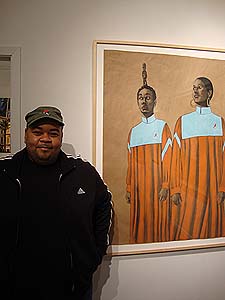 Two weeks ago I went to see my friend Robert A. Pruitt’s exhibition, The Forever People at Hooks Epstein Gallery and on view through February 13, 2010.  Robert based the title of his show on The Forever People, a D.C. Comic series from 1971, that featured the company’s first Black superhero, and depicted a “fictional group of extraterrestrial superheroes”§ who dressed like hippies, could combine force s to become a single entity, and foiled their enemies by setting back the hands of their watches so that they never arrived at any event on time.
I like Robert’s work.  At its best it is well executed, thoughtful, funny and complex. I especially like and appreciate that he layers many references within a single piece, such as in Post, in which a woman, in a pose reminiscent of Millet’s The Gleaners, carries on her back
stereo equipment, old computers, beat machines, hard drives. 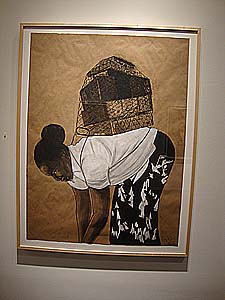 “I really wanted to up the contrast between this type of stereotypical black image and the objects she’s actually carrying on her back”, says Robert.  He also adds “the patterning on her shirt “is modeled after a Norman Lewis painting called Post Mortem, that seems to depict groups of klansmen busily moving about and waving flags.” ß

As I spoke to Robert the night of his opening, I noticed a deluge of tears rushing like torrents from his eyes.  Climbing into a rowboat to protect my socks and shoes, I asked him what was wrong.  “Oh it’s nothing,” he said,  “I just have a bit of glitter in my eye.”Glitter Now there is a word I can’t get enough of.  “Glitter,” I said in order to say it again. “Glitter, why do you have glitter in your eye?”

Robert smiled in that particular way that he has (which kind of looks like the percentage sign on the keyboard of my computer), and began to tell me about what’s next on his plate.   Robert, and other members of Otabenga Jones & Associates (Dawolu Jabari Anderson, Jamal Cyrus, and Kenya Evans  are working on an exhibition that will be on view at Clementine Gallery in New York, in September of this year.  Known for their thought provoking enlightening installations, their newest endeavor bears the intriguing moniker “Red, White, Blue, Red, White, and Blue.”

I asked Robert to explain what the viewers will see and experience when they walk into the exhibition. 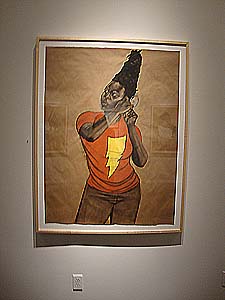 “When they first walk in they will see a room covered in gold foil and splattered with flicks of paint, done in a style reminiscent of say, a rich lady with absolutely no talent taking an abstract painting class,but on a larger scale.

“No, no, listen, this is going to be great.   Then, after we splattered the gold foil with paint, then we will take posters of prominent White Americans, people like Ted Haggard, Pat Robertson, John Edwards, Bud from Married with Children, Heidi Montag, before and after her plastic surgery, those two pricks Jon Gosselin and James O’Keefe, Richard Heene, Nadya Suleman, Mandy Patinkin in Criminal Minds, Connie Chung, and Carrot Top, and then we’ll hot glue these posters kind of half assedly on a bunch of cut outs shaped like Split Level Ranch Style Homes, which we will at first hang on the wall, but then we’ll get tired, and from that point on, we’ll just lay them against the walls. Some of them might fall, but we prefer to leave them that way”

“You are not listening to me Beth, and you are hurting my feelings. What you don’t understand is what we are trying to do is of major importance. Nobody has ever done anything like this before. We are doing nothing less than creating a historical survey, these images we are using are ones that have risen to the top of American culture that created a rich, popular identity of what the white experience had been through adversity.  Through this adversity, they had been able to do genius things.” 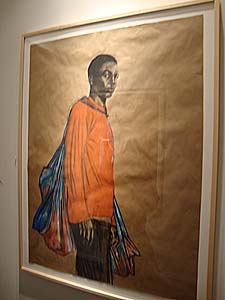 “O.K., first of all, that doesn’t even sound like you.  Those last two sentences are the most grammatically incorrect I have ever heard.  And then secondly, aren’t you afraid of the scandal this could create? This could ruin you! Robert, you need to put a stop to this “fashionable attempt in the spirit of Jeff Koons to make mass culture collide with high art.”µ

“No, no, see, see we have a backup plan.   If this installation backfires, say if people think we got heavy handed with the hot glue, well then we will do another installation that combines two things that no one in the art world can ever resist. ”

“And what could those possibly be?” I asked unconvinced.

“O.K., this is beautiful, you are going to love it.  First we are going to do a little something we like to call “Pixie Stix Buffet. ” We thought about calling it Pez Buffet, but those get lodged up your nose, and then we’d end up making a lot of trips to the emergency room.  O.K., o.k., then check this out, if that doesn’t work, we are going to  – I am so excited about this one – we are going to take paintings of pandas and cover them from top to bottom in literally hundreds, if not thousands of color coordinated Lisa Frank stickers.  What do you think?“

All of this stuff down here is my attempt at footnotes