But What About the Gorilla? 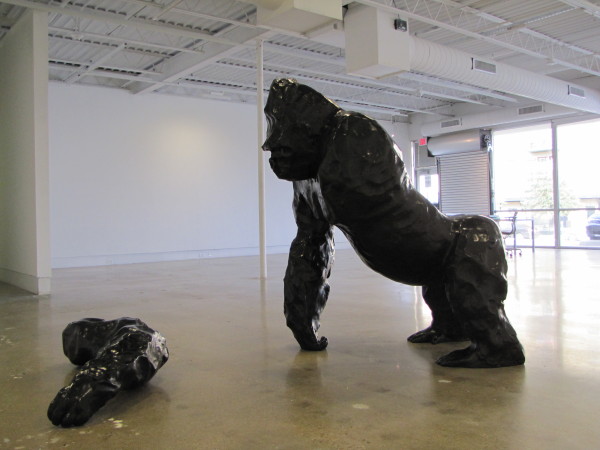 Angus Fairhurst “A Couple of Differences Between Thinking and Feeling” (2004), installed at FWCA in 2011.

I just got wind that Kenny Goss has put his Dallas house on the market, and my immediate panicked thought was “But what about the gorilla?”

Goss is, of course, the sweet-natured owner/impresario of the Goss-Michael Foundation in Dallas, which has since its inception eight years ago focused mainly on collecting and showcasing British art. The collection has spilled over into Goss’ Highland Park house all along, and during the many parties he’s thrown there that I’ve attended, the highlight for me was checking out what he’d installed inside and out. A Don Brown here, a Bridget Riley there. A Chapman brothers downstairs, a Sarah Lucas upstairs, and so on. There was some rotation.

But Angus Fairhurst’s giant bronze gorilla, due to his size and weight, was always in his spot, at the rear of the back lawn in a semi-protected alcove. He faced the house and, of course, his own detached arm on the ground in front of him. And since I’m the kind of party goer who seeks out the owners’ pets for company (I’m that person), the gorilla became my touchstone at the Goss house parties. It’s called A Couple of Differences Between Thinking and Feeling, and was made in 2004. Fairhurst killed himself in 2008 at the age of 41. 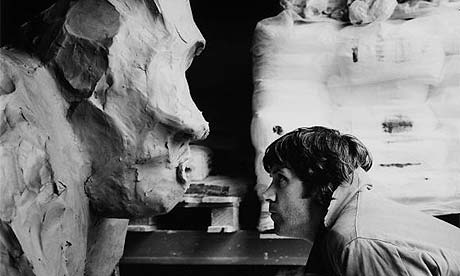 I love Angus Fairhurst’s work: his humor and absurdity and pathos dovetail beautifully in that gorilla. Much of what Fairhurst made feels, conceptually, both very light and very heavy, and there aren’t many artists who can pull off that trick. Fairhurst used gorilla imagery—drawings, sculpture, video—throughout his career; it was his uncanny, mute mascot: his alter ego. Brute, other, majestic, pathetic, melancholy.

The back of the Goss house.

Side note: I’ve been in a lot of collectors’ homes over the years in a lot of major cities, and Goss’ circa-1940 understated Georgian-facade house is possibly my favorite in Texas in terms of feel and layout, at least in the sense of “I could live here.” (If I were crazy rich I might opt to move it, brick by brick, to East Dallas, but that’s just me.) John and Jennifer Eagle’s house, by Edward Durell Stone, is up there, yes, because who wouldn’t want to live inside a Peter Sellers movie, but Goss’ house has a kind of Goldilocks just-rightness about it. (And I suspect the gorilla has something to do with my attachment to his house.)

The black lump on the ground at the back between the hedges is My Gorilla’s arm. Gorilla is right behind it.

So, back to the gorilla story. When I was running TCU’s Fort Worth Contemporary Arts in 2011, I asked to borrow the gorilla for a show—I wanted to show him on his own, with no static from other work—and the G-M Foundation agreed to loan him. I won’t apologize for referring to an artwork with a pronoun. That’s the effect My Gorilla has on me. There, I made it worse. I do refer to him as My Gorilla. I wonder how many of us who love art, and see a lot of it, get so attached to something in some collection somewhere that they/we start to feel territorial about it. (There’s a Dieter Roth at the Walker I do that with, but it’s the only other work I can think of that inspires such possessiveness in me.)

Here’s what happened. A few things happened, actually. The art handlers show up at the space in their truck—I’m pretty sure it was Unified, which is a good sign—and the gorilla is strapped to a huge wooden pallet. His arm, of course, is in its own crate. Both arm and gorilla feel like they must weigh around a million pounds. The handlers magically get the gorilla onto a big dolly and while they’re unloading the arm crate, I push the gorilla toward the gallery loading bay. The artist Devon Nowlin, who was the gallery manager at the time, took a picture and of this and, being a painter, she made a painting from that photo. (My mother bought that painting from a 2013 group show at Artspace 111 and to this day she swears she did not know she was buying a painting of her own kid. It is of my backside, but still.) We finally get him into the gallery and Devon and I are saying, “Now what?” and the art handlers say: “Well, that’s it. We’re done.”

So here’s a kajillion-pound gorilla on a pallet in the middle of the gallery. We can’t move him, place him, unwrap him, nothing. We need a gantry crane. And of course the gorilla doesn’t show up with his own crane, and I—not being a registrar—had utterly failed to think of this. 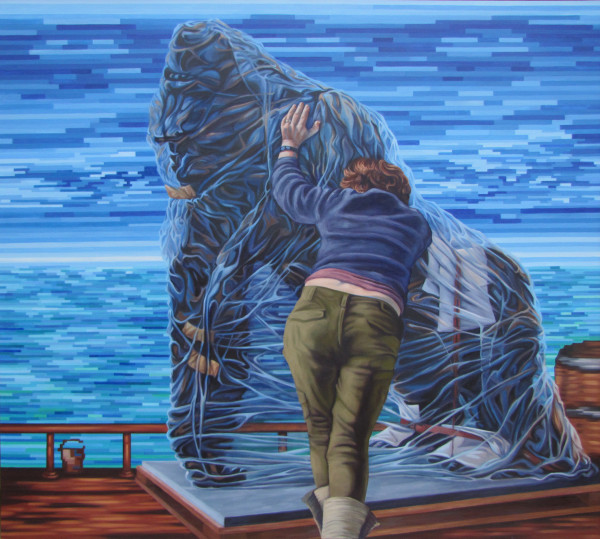 We sourced a gantry crane that day, and fortunately there are some professors at TCU who really know their way around this kind of rig. And all the MFAs came over to watch this spectacle and even help get the gorilla up, over, and into place. It took hours. I was like a baptism. It was a strange, tense, and great day.

It marked the gorilla’s six-week residence at the gallery and of course he was a hit. The gorilla is perfect for receiving projected emotions and expectations from anyone: comedy, sadness, contemplation, trauma, loneliness, the moment of entering self-consciousness. Everyday I walked into the gallery and in a very uncharacteristic ob-comp ritual, I would place my palms on either side of his face and press my forehead against his and ask him how he was doing. I would tell him how I was doing. In a world where no one is supposed to touch the art, ever, there was something incredibly moving about having such a tactile relationship with this work.

And then, at the end of the show’s run, he was taken away. I knew I would miss him, but I didn’t worry too much because I knew he was going back to his lovely, peaceful house and lawn, and I would get to visit him every so often. 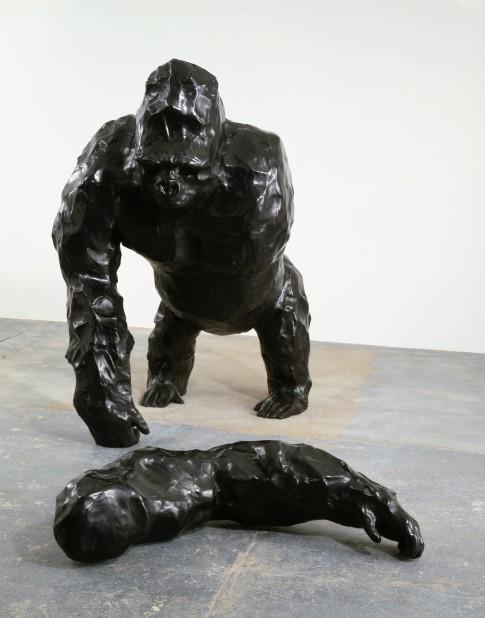 I called the Goss-Michael Foundation today to ask about him. The person who answered the phone might well have thought I was crazy, but she patiently explained that no, the gorilla has not been moved from the house to the foundation. She said she wasn’t sure where he would go. That he might go out on loan. I’m the kid who completely internalized The Velveteen Rabbit, so I dread to think he’ll be put in storage indefinitely, in some dark warehouse.

Proposal (you might have seen this coming): The Nasher should take him on long-term loan; put him out in its lovely garden, near the de Kooning and the Moore. The burning glare from Museum Tower can’t hurt My Gorilla; he’s tough. He’d be very happy there and I could visit him, and so could all of you.

I am the consulting architect to a Home Owners Association(HOA)of a very wealthy local neighborhood community. Having a well regulated HOA involves strict controls on what a property can and cannot look like. The merits of this have been debated endlessly.

Ms. Rees’ story reminds me of case that came up earlier this year involving a home owner who had purchased a large expensive red abstract sculpture for the front of his unfinished new house without the requisite approval from the HOA. In desperation this home owner turned to me for advice on how to write a letter to the HOA committee that would create a compelling case for placing the sculpture in front of the house. I simply said, “Argue the case for the sculpture in terms of it being integral to the design of the house and site”. Which I indeed believed it was. I then proceeded to advise the homeowner that he should most likely start looking for another more private location on the property.

When the case came before the committee much to my surprise (because this is mostly a practical and conservative based community) the abstract sculpture was allowed. After heated debate the argument had swayed the committee but with a set of very interesting conditions:

1. If the sculpture is considered integral to the house, modern in its design, then it must always remain with the house even as a condition of sale to another owner.

2. If publicly viewed from the front of the house and integral to the site, then the sculpture will be considered part of the public domain. (This means it can’t be removed or replaced without another consenting vote from the HOA)

I stand in awe of human ingenuity to regulate the built environment.

Interesting, thank you for sharing

Loved your essay, Christina! There’s nothing quite like connecting with a piece of art to the extent that you consider it yours. When I was an art history major at SMU, I took a class in Museum Education. We spent hours in the Meadows Museum learning to be docents. The original museum was designed as a replica of a Spanish villa, so we truly felt like we were in a home among the Spanish masterpieces. I fell in love with a beautiful, realistic river landscape by Emilio Sanchez Perrier after writing a paper about it. I’m typically attracted only to modern and contemporary art, but I spent so much time studying that painting, I felt like it belonged to me. Actually, I felt like most of the paintings belonged to me. When I met Scott Winterrowd, Curator of Education, I engaged him in a lively discussion about the name change of Goya’s “Madhouse at Zaragoza” to “Yard with Madmen.” How dare they rename “my” painting!

I swear i bought devon’s painting because it was MY GORILLA. and because the person pushing it represented for me all the shipwrecked women of the 70’s. we couldn’t even get a credit card in our name. we were pushing and shoving the gargantuan Establishment for human(read woman’s ) rights. so, i bought it because to me it celebrated the strength and determination of women to be respected.

and i really did not know that it was Christina continuing the pushing.

What a sweet and touching article, so connected and personal. The mother’s reply is the best!