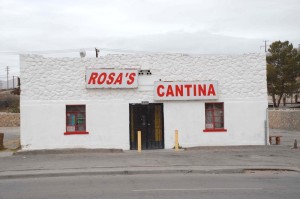 Out in the West Texas town of El Paso

I fell in love with a Mexican girl.

Night-time would find me in Rosa’s cantina;

Music would play and Felina would whirl.

For those keeping track of The Manifest Destiny Billboard Project as it makes its way westward from Florida to California, the sixth chapter has arrived in El Paso. Artist Jeremy Shaw has installed his set of ten billboards, all of which portray the “Marty Robbins Biggest Hits” 1982 album cover. (One of those big hits was Robbins’ 1959 hit song “El Paso,” which won a Grammy and reached number one on the pop charts in the ‘60s.)

Last summer, Zoe Crosher presented Chapter 4: it is so, is it so in Houston and, last fall, John Baldessari installed his Chapter 5: Love and Work in San Antonio. The Manifest Destiny Billboard Project is placing 100 boards by 10 artists along Interstate 10 by spring 2015. The project was conceived by artist Zoe Crosher, organized by LAND (Los Angeles Nomadic Division), and curated by LAND’s curator/director Shamim Momin.

Chapter 6: Marty Robbins Biggest Hits will be up through February.

John Baldessari, RIP (Plus a Brief Chat With...