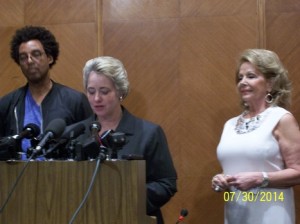 Houston Mayor Annise Parker has named philanthropist Philamena Baird and Project Row Houses Founder Rick Lowe as co-chairs of the Cultural Plan for the City of Houston, a 2-year initiative begun in early 2014 to create what clifford Pugh of Culturemap called “blueprint for Houston’s cultural future.” The last cultural plan was made in 1993, more than 20 years ago.

“I want to thank Rick and Philamena for agreeing to give their valuable time and take this on,” said Mayor Parker.  “Houston has changed dramatically since the last cultural plan in 1994.  We are more diverse economically and ethnically.  The number of arts and cultural organizations has grown, and our artist community has become one of the most exciting in the country.  It’s time for a new plan that will position Houston as a leader and destination for arts and culture.”

The Mayor announced  the plan and the implementation of a new five-year cultural arts budget using revenue from the hotel occupancy tax at the annual Elected Officials Reception for the Arts in January 2014. The cultural plan process is being coordinated by the Mayor’s Office of Cultural Affairs.  Mayor Parker has directed that the plan be finished before she leaves office at the end of 2015.

(photo: Marc Pembroke for The Examiner)