Put the Houston in Houston Museums! 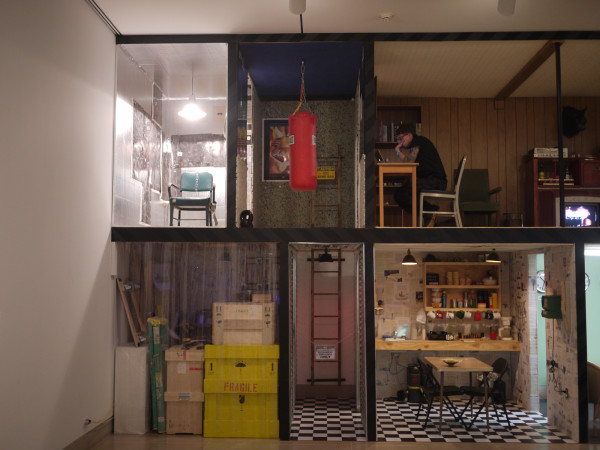 Yesterday, Randy Tibbits of the Houston Press took the Museum of Fine Arts Houston and the Menil to task for failing to show Houston artists.

Museum visitors to our city (and residents, too) might be excused for assuming that the only art we’ve ever had has been bought and brought from elsewhere. They’d know for sure that art had been made in New York and Paris, in Italy, Indonesia and Africa. But Houston? Not so much. Most of the time you can go through both of our major art museums thoroughly and leave without a clue that art has ever been made anywhere in Texas, let alone in Houston.

It’s an argument we’ve heard a lot in recent years, not just out of Houston, but out of other big Texas cities, like Dallas—hometown art lovers and artists frustrated by the idea that their place in the world only imports art good enough to deck the hallowed halls of its institutions, but doesn’t actually make any. It underscores the Sisyphean struggle on the part of Texas’ art institutions to seem “world-class” to the Big Art Cities; which is to say its needs to have the same stuff and act the same way of cities that matter in the world, which is to say New York. (I am pleased to know that striving to be World Class is not just a disease that Dallas suffers from.) Tibbits reminds us that art institutions are really only ever as good as the art climate they are part of, but that it’s very easy for the institutions to forget:

We rightly (though perhaps a little too often) give ourselves lots of credit for a vibrant contemporary art scene. There’s art everywhere. The city is full of galleries and studios. It’s no challenge to see art that’s being made in Houston. But art that was made in Houston? Seeing that is almost impossible.

In his piece, Tibbits looks to the Dallas Museum of Art as an example of a place that gets it, that understands the importance of its own community of artists, mounting shows like Julian Onderdonk, Loren Mozley, and Alexandre Hogue: The Erosion Series. The DMA also just featured a local artist Stephen Lapthisophon as one of its Concentrations artists, a series that highlights the best of contemporary talent on a global scale. And last summer, the museum turned its Barrel Vault and quad galleries over to a motley crew of local artists and collectives to show the city what it is made of in an effort called DallasSites: Available Space.

All of this may make the DMA out to be a champion of its own community — a well-balanced and humble-enough place to allow the artistic riff-raff into its sacred spaces, which is a quality that gets truer and truer of the place, slowly. But Available Space was the first time anything of the sort had happened in the museum, and only after years of  disgruntled criticisms were railed at the place. Some wonder if it anything like it will ever happen again.  But the effect of a show like Available Space, wherein the museum’s most notable galleries were occupied with the brainchildren of the city’s talent, was two-fold. First, to the local art community it felt like a revolutionary take-over, and artists in the exhibition, like Homecoming! Committee, even capitalized on that notion in militant ways, staging an occupation of the space. It was a triumph to infest those galleries, even if the groups had been invited in to do so. But secondly, the exhibition proved that no one but the artists involved and the people that supported them in the larger community actually cared what went on in those galleries for those four weeks. The collectors and patrons that are the real cogs and gears in the museum machine, at whom so much of the show’s criticism was aimed, were all out of town for the summer. They never saw it. And the museum administration itself, except the curators, Gabriel Ritter and Leigh Arnold, and registrar staff that facilitated the show, were not invested in it, making the event seem like a political gesture, a bread crust tossed at the hungry. But still, the show felt like proof of something–energy, imagination, rigor, and guts–even if the artistic community was only talking to itself.

So stick it to the man, Houston. At some point he has to listen, sort of.

Why isn’t the CAMH telling Tibbits to shut his mouth?

That was ironic timing, but let’s face it: TDH has the approval of NYC which made it easy for CAMH to choose him for an exhibition. The last time they gave shows to Houston artists was in 2009 (oh, and in 2011 they gave a show to Houston area teen artists, so there’s that…).

It is ALWAYS a fair criticism – however, being an artist in a city shouldn’t get you into the museum. Barry McGee, David Park, Chris Johanson, Arneson, Joan Brown and other terrible artists degraded the SFMOMA for years due to this kind of outcry. First rate Sigmar Polkes, Fontanas, Beuys and Brice Mardens molded in the basement so those jokers could “represent Bay Area Art”. Park and Brown are nice enough every once and while, but not worth keeping great international work in the basement.
Houston museums should show work by Houston artists that museums in other international cities also regularly show.
Houston artists should concern themselves with getting into museums all over the world before the museums here. Museums are for international quality work – local galleries take care of “local” work.