Will Henry: Nocturnes and High Plains at Hiram Butler Gallery 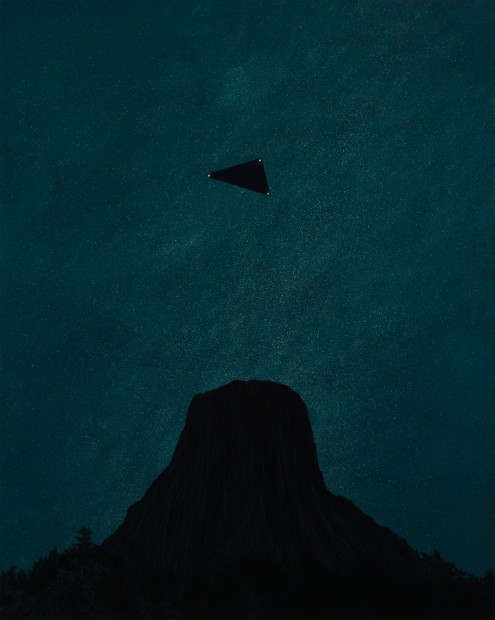 The future of painting is smart and sincere, is deft with a brush and a punch line, knows its talking points and keeps to them, asks questions to which it has given forethought, and holds potential answers in reserve.  And while such an artistic multitude will hardly bear a strict and singular profile, as Will Henry is nevertheless here to attest, that future is now, and it holds more than plaid painting.

To those for whom painting is imagined as a palliative for vegetarians between meals, consider Henry as a cast iron counterproof.  With a name fashioned exclusively of denim and tanned leather, Henry originates from the sagebrush beyond Austin’s halo, and has all the road-dust bona fides requisite a southwestern landscape painter.  His influences are as numerous as they are disparate—running the gamut from Donald Judd to Frederic Remington—and his considered wrestling with them earned him one of the three finalist positions for the AMOA-Arthouse 2012 Texas Prize. 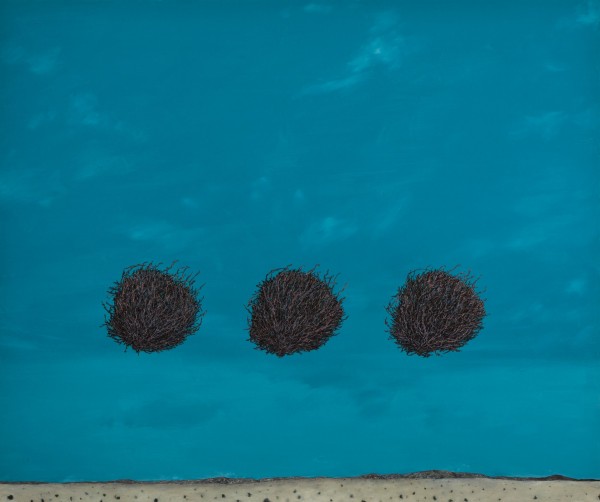 In his simply titled exhibition, New Work, at Hiram Butler Gallery, Henry moves his practice from the modestly sized gouaches on paper which have previously occupied him, to the more luxuriant space of fully realized canvases; and the extra real estate is well worth the price.  The show, which is said to be his first of works exclusively on canvas, is comprised of five paintings of which only two fail to land their intended blow.  Of those misses, Installation (2012) is noteworthy particularly for the size of its swing, and the slim margin by which it fails to connect.  In this case Henry depicts a nocturnal western landscape whose foreground is occupied by an arrangement of dim florescent light fixtures leaned together with sticks of kindling, as one might build a fire.  As its subject, the work discusses both traditions of light and light source in nocturnal representation, but more significantly, in referencing Dan Flavin’s florescent light sculptures, Henry suggests the struggles of grappling with a minimalist legacy of sleek but often anemic aestheticism—after all a Flavin campfire may offer light, but no heat.  Regretfully, the work is a missed opportunity simply for the final degree of representational accuracy (for which Henry has a demonstrated skill), which fails to equal the level of consideration brought to the subject itself.

Southwestern Painting (2011) is a work whose faculties are in perfect harmony. It presents three levitating tumbleweeds.  The horizon line is pitched low in the composition, while the tumbleweeds appear suspended within the twilight sky.  Henry’s brushwork ranges between the loose, but potently expressive field of sky, and the fastidious accretion of the tumbleweeds’ depth and surface.  What’s more, the work elicits the surrealist iconography of Rene Magritte’s floating boulders, but as through a cleverly realized transliteration of vernacular.

Another unmitigated success of the exhibition is Painting For Budd Hopkins (2012).  Here Henry seizes upon the mesa-like igneous intrusion commonly known as Devils Tower, in northeastern Wyoming.  Once again Henry presents a deeply textured night sky, with the Milky Way unfolding along a vivid diagonal.  With such pains taken to address the rippling veil of night, the veined and furrowed surface of the tower, and the canopy of trees encircling it, these elements alone might provide for a fulfilling image.  Henry’s inspired touch, however, is delivered with a feature whose presence would otherwise blight the work for traditional landscape enthusiasts: a space ship.  Above the tower hovers a single black, triangular silhouette replete with navigation lights at each corner.  Rather than a jarring afterthought, the effect is to greatly broaden the scope of the work. 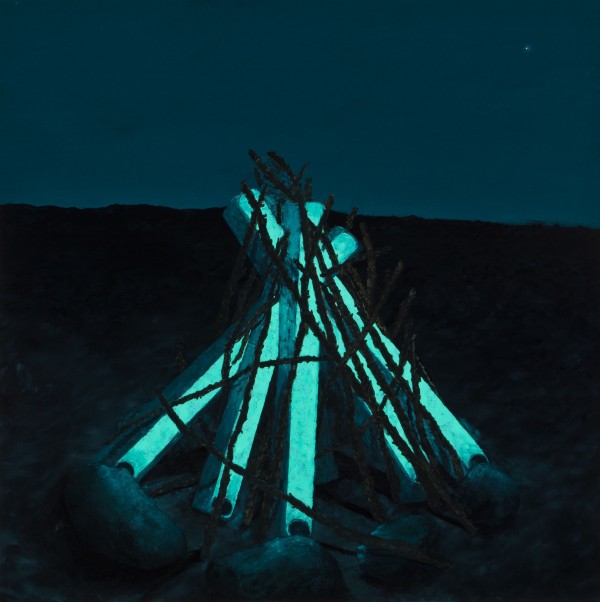 Certainly the piece is seething with wry wit, but it’s the grown-up table dialogue that delivers it from zinging one-liner to a work of dimension and keen observation.  With this piece, Henry addresses the insatiable encroachment of popular culture upon the sovereignty of personal experience and expression: in this case by way of the inevitable association of Devils Tower with the Steven Spielberg film Close Encounters of the Third Kind.  But further, Henry calls again upon minimalism to make an accounting of itself.  Through Henry’s lens, the triangular vessel may as well be a flying Ellsworth Kelly, simultaneously impressive and alien.  And to it his question appears to be: how are prevailing minimalist traditions to be balanced against the meandering totality of art history?  Is there coexistence—an accord to be reached?  Or is the whole of legitimate and natural expression to languish beneath a proscribed aesthetic?

Ultimately the answers to these questions hinge as much upon taste as disposition.  Yet if these points don’t enjoy a clarity of consensus—what seems abundantly clear is that Henry’s recipe is a potent antidote to pinstripe parrots, and a Bowie knife in the tire of the representation-as-irrelevant bandwagon.