Round 33: The Seventh House at Project Row Houses 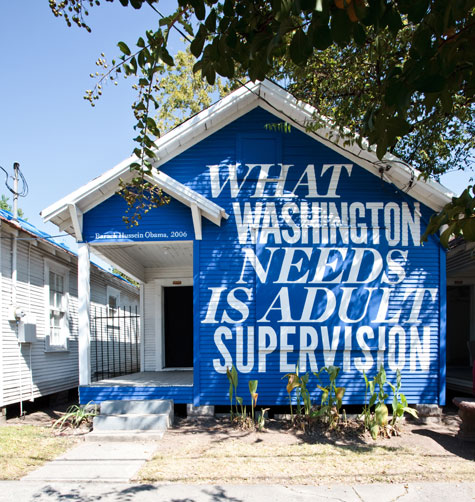 As Edgar Arceneaux and Nery Gabriel Lemus point out, the “Seventh House is…significant in astrology as the house of cooperation and opposition.” With this in mind, they co-curated Project Row House’s Round 33: The Seventh House, a group exhibition subdivided among six row houses for individual artist projects. The seventh house, serving to embody the essence of past and present dialogues and collaborations between the artists, also functions as a reading room and think tank for community members and visitors to Project Row Houses.

Arceneaux and Lemus’s project here is ambitious, idealistic, conceptually challenging and complex. Besides allotting artists Andrea Bowers, Charles Gaines, Olga Koumoundouros and Rodney McMillian individual houses for their projects, they have included their own voices and occupy two of the six components of their group exhibition. Utilizing widely divergent media and making individual statements, these artists’ projects within separate spaces are intended to speak, at some level, in unison.

As individual works, the exhibitions in each of the six row houses do present a unified theme and collective consciousness, and are each successful on many levels. Edgar Arceneaux’s The Human Sugar Factory (one) is an installation composed of burnt cardboard boxes, bricks and other detritus on stark metal shelving. The decay and destruction here is emphatically bleak; however, Arceneaux, having applied a thick crystalline crust on these objects,
and then showcasing them in a mysteriously low but warm light, creates an installation of beautiful destruction.

Rodney McMillian’s portal: a state of kemmering in the Council-era of corrosion is also visually and physically compelling. Crudely sewn black vinyl remnants form a tunnel that guides participants from the front entrance of the house through to the back porch. McMillian’s use of only a portion of the house to make his passageway, as well as his use of signature black vinyl, lend a disturbing air to one’s journey through the piece. Having felt one’s way through the black vinyl to be spit out onto the back porch feels disorienting—yet somehow also transformative.

After emerging into the light at the end of the tunnel, this viewer almost didn’t want to return to the entrance through the same route for fear of losing that original anticipation of the unknown. The dull black vinyl and crude stitching connote ugliness and alienation, a handmade tunnel for Frankenstein. Yet the transformative aspect of the work prevails; like Arceneaux, McMillian presents an unsettling beauty. 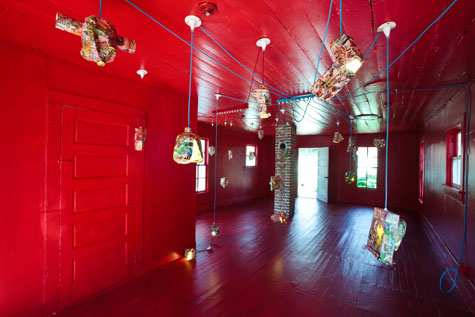 Olga Koumoundouros and Nery Gabriel Lemus’s projects have a superficial playfulness about them while directly confronting unpleasant issues. Koumoundouros, in Accumulation of Mondays, painted the entire interior of her space a deep red, hung “lamps” made from papier-mâché and discarded waste at different levels throughout the space. Bright blue cords are exposed, lending a vein-like quality to accompany the bloody red walls and floor. The lamps seem strangely organ-like; their bulky shapes of pieced-together cereal boxes and plastic gallon water jugs, which have been covered with brightly colored bits of paper, are cheery and depressing at the same time. What’s pumping through our systems is, unfortunately, a lot of crap.

Lemus’s project, Until the Day Breaks and the Shadows Flee, also presents his sober subject matter in a clever and visually palatable manner. His project, stemming from work he did with domestic violence survivors, is constructed as a broken narrative in large comic book-style panels on the walls. The depicted scenes, of women and children being abused, are based on Mexican comic novellas that the artist remembers from his childhood. As if to depict the victims’ inability to represent or defend themselves, Lemus left the comic dialogue bubbles blank. The viewer is prompted to come to his or her own conclusions about the stories presented.

Attached to the brick pillars at the center of the space, however, are t-shirts decorated by those who survived and were helped through the efforts of a community center. Despite the violent illustrations on the walls, Lemus presents healing and hope.

Hope, or rather Hope in Hindsight, is Andrea Bowers’ installation, and it is, without question, not only the centerpiece of this exhibition, but the most potent. Bowers’ work here addresses and embodies the Seventh House themes of cooperation and opposition, particularly the problems in achieving unity in our country’s current poisonous political climate.

On the exterior of her row house, Bowers has painted a mural of vibrant blue with bold white letters. The text is a quote from a 2006 fundraising letter written by Barack Obama: “What Washington Needs Is ADULT supervision.” Inside, a video of the crowd—from a fellow spectator’s point of view—at the Obama inauguration is projected on the entire back wall. One feels a part of the crowd in this video, and the enthusiasm and optimism here are almost as infectious as they were at the original event.

In the center of the space, on the floor, is a stack of glossy posters that one may take away. On a similarly vibrant blue background, a boy grins, hands in his pockets. He’s sporting a t-shirt depicting Barack Obama shedding his Clark Kent-type attire to become a superhero. Another Obama quote on the poster, combined with the image of the grinning young man, does nothing but inspire hope. 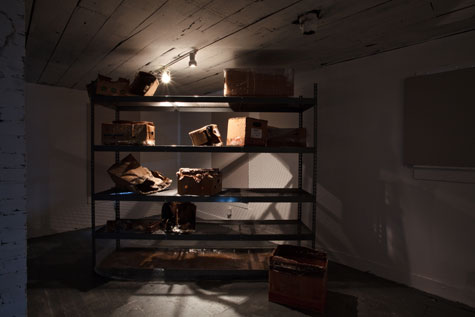 On the opposite wall, however, is a video presented on a small screen. There, at a town hall meeting, a woman stands up and tells President Obama that she is tired of defending him. She asks if the economic hardship that is affecting her family is her “new reality.” She wants to know when relief will be on
its way.

The genius of much of Andrea Bowers’ work is that, despite the rather sizeable issues she takes on, she treads lightly. Her presentation of wildly unrealistic expectations—Obama as superhero, alighting to save the country—and equally unrealistic disappointment or pessimism—one woman’s demands to have personal issues solved by a president hobbled at every turn by the inherited sins of the Bush administration and partisan politics preventing the slightest advancement in agenda—is handled with aplomb. We’re all on board when we’re presented with hope as an abstraction, but we want ours without regard to what’s realistic.

Yes, this viewer was particularly irritated by the woman at the town hall meeting in Bowers’ video, as she seemed dangerously close to the parody of an undecided voter that Melanie Hutsell portrayed in a Saturday Night Live skit during the Clinton administration. Hutsell’s repeated whine of “but where’s MY stuff?” targeted the childlike self-centeredness of American voters. So, what can “adult supervision” really accomplish?

With that realization, Bowers’ work perhaps takes on a different meaning. The bold and hopeful words on the outside walls, addressed to Congress, have a different feel if they are addressed to us. Bowers’ work here is striking, as it presents a body united by hope to change a nation, but can not, ultimately, see how difficult it is for an “adult”—one swimming in the polluted waters of politics—to serve every child’s needs.

The Seventh House is a provocative endeavor and presents the idea that, despite our differences, we can work together as one. Although the presentation is successful in many respects, Charles Gaines’ String Theory: Rewriting Fanon installation embodies a certain danger inherent in the concept of Arceneaux and Lemus’s project.

Gaines’ framed, text-based works are radically changed passages from Frantz Fanon’s Black Skin White Masks. The conventionally framed pieces have a clean, minimal feel, and this artist’s row house seems much like a commercial gallery. Although Gaines describes a specific process in changing the words of the text, and though the resulting sentences can be intriguing, their meanings are ultimately impenetrable. Of all the artists in the exhibition, Gaines seems the least willing to share his sphere in a participatory manner; transformations have occurred, but they have not been transformative.

To a certain degree the final—seventh—house, replete with stirring quotes painted on the wall, shelves offering a catholic array of thought-provoking texts and a space in front providing a place for children to color and amuse themselves whilst their elders expand their horizons, is like Project Row Houses itself, an effective community gathering center. As Arceneaux and Lemus surely intended, the texts here—from Dale Carnegie’s How to Win Friends and Influence People to Junot Díaz’s The Brief Wondrous Life of Oscar Wao —are meant to appeal to a widely diverse audience and are likely to spark lively debates. It is not impossible that some of these will enlighten and change the minds and lives of the participating individuals. 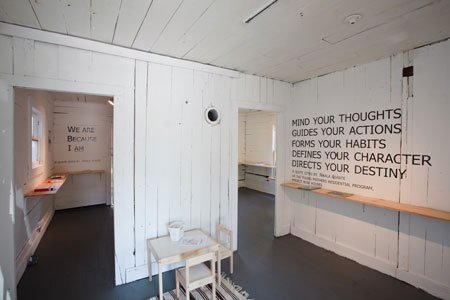 Arceneaux and Lemus claim that their bringing together a group of artists with differing points of view results in a non-consensus that “is not a problem to be resolved; it is that very attribute that is unique to collective practice itself—division, conflict, mediation and catharsis.” In that aspect, The Seventh House delivers. Collectively, the individual artists’ views offer an effective statement that is greater than the sum of its parts.

However, as a group exhibition of visual art, the isolation of each artist’s work within separate houses limits the efficacy of the dialogue that could take place. The artists do communicate with each other, but perhaps not with the ease that they would if they were strategically placed in a single space. In spite of itself, The Seventh House reinforces the metaphorical isolation and selfishness portrayed in the Andrea Bowers video. We could probably learn a lot from our neighbors if we chose to go outside or invite them in, and together we could do great things. In the end, however, we are alone, and we must close the door. And, like those disillusioned by a president who is, ultimately, a politician, we want to know why Daddy hasn’t brought us our stuff yet.