“Kurt Schwitters: Color and Collage” at the Menil Collection 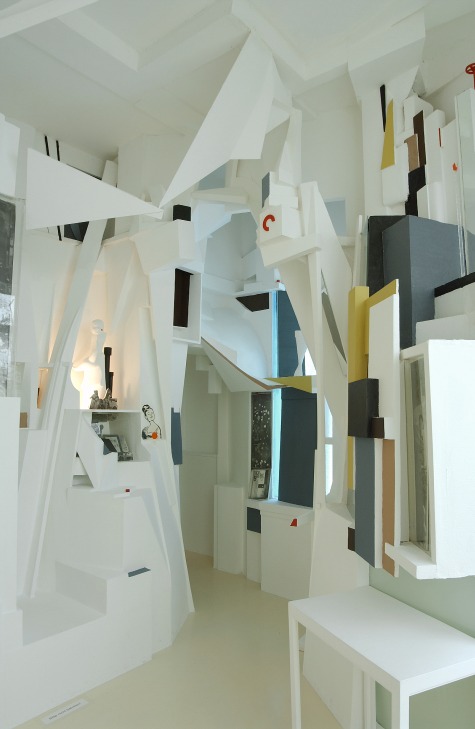 On my first visit to Kurt Schwitters: Color and Collage at the Menil Collection, I overheard a man behind me whispering to his companion. “You know,” he hissed, “this stuff looks like all the collages people were making when I was in undergrad…”

I thought, “What an idiot.”

I’m sure I wasn’t wrong. The guy probably is an idiot. But his thoroughly predictable comment made me realize that I’d been walking around the galleries with a gnawing feeling that I’d seen the works in this exhibition before.

Of course, with the exception of an occasional reproduced image, I could not have.Kurt Schwitters: Color and Collage, organized by the Menil in cooperation with the Kurt and Ernst Schwitters Stiftung at the Sprengel Museum Hannover, and guest curated by Isabel Schulz, is the first U.S. overview of the artist’s career since a retrospective at the Museum of Modern Art 25 years ago.

So why the feeling of déjà vu? It took a few seconds, but it finally hit me. Kurt Schwitters is perhaps not the most well known artist, and he certainly did not receive the accolades that he deserved, but the influence he wound up having on subsequent generations of artists is immeasurable. If you didn’t know better, you’d walk up to a Schwitters and think it was a Rauschenberg; in fact, though, it was Schwitters’ collages and assemblages that informed the works of Rauschenberg, Johns, Ellsworth Kelly and Cy Twombly.

Even more remarkable to contemplate is the influence that Merzbau, his room-sized installation, a reconstruction of which is on view at the Menil, has had upon contemporary artists like Jason Rhoades, Jessica Stockholder and Gregor Schneider.

To what, exactly, was Kurt Schwitters so in tune? Why are his insights and compositions still relevant today? Why is Schwitters the Iggy Pop of the art world?

Color and Collage had to have been an enormous undertaking, but the curatorial genius here can be attributed to the fact that Schwitters’ career—a very wide-ranging and prolific one that also included critical success as a writer—has been narrowed and reexamined through the concept of Merz, a word that Schwitters invented himself, extracting it from the German Kommerz, meaning commerce. 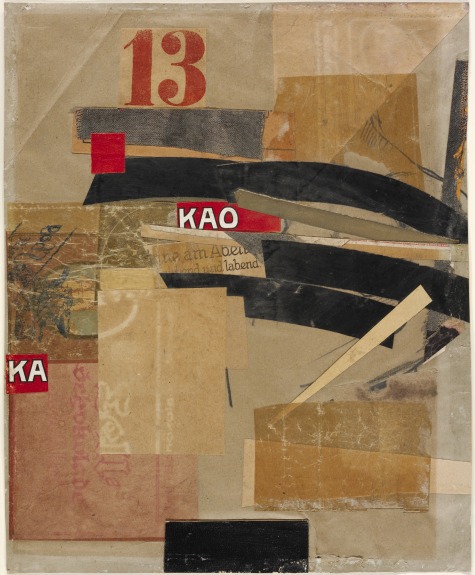 In the exhibition’s catalog Isabel Shulz notes that “As a made up word, it has no translation except for the meaning that Schwitters ascribed to it, namely, that his art and finally he himself were ’Merz’.”

That the artist treated everything around him as fodder for his art, and in turn viewed himself as an evolving work, is a gesture that is certainly familiar to us in these “postmodern” times, but in his own day Schwitters’ nihilistic and revolutionary work was anything but. A “revolutionary abstractionist,” he produced paintings with little or no paint on them; loud and boisterous compositions that are often most effective on a very small scale; assemblages that are as delicate as they are brutal.

One cannot walk away from a piece like Untitled [Vogel (Bird)] —a small collaged piece of a subdued and rather grubby robin’s egg blue—without being drawn in by its beauty. Nor can one help but feel the seemingly arbitrary nature of existence. A wash of tobacco brown stains the left side of the paper. A stamp and a broken cigar band gird the brown stain, yet the arm of the band trails off onto light blue ground. Quite interestingly in this rather spare work, the small collaged paper is affixed to a larger one with the same bluish-white and brown. The smaller paper mounted upon the other is haunting—beautiful, yet disjointed.

As is evident very early on, Kurt Schwitters was a brilliant colorist, his palette and handling of color sometimes recalling Paul Klee. A piece like Ja Was (1920), for instance—which reminds one of analytic cubism (conventional painting with collage elements, rather than a collage with a swipe of paint, a style more typical of his later work) —envelopes the viewer in a mood with deep blues, greens and blacks, juxtaposed with a bit of red.

This ability to create beauty out of the discarded and broken, to make poetry out of chaos, is at the heart of everything Schwitters made under the concept of “Merz.” Starting out in the tumultuous aftermath of World War I, Schwitters’ art speaks of loose threads and things that don’t cohere, as does his life. Persecuted by the Nazis, his work destroyed and viewed as degenerate, he was forced to give up his home time after time, and his pet project, Merzbau, was obliterated before it could be exhibited. He created on the run; he grabbed at the ugly, war-ravaged items around him. His palette—the junk and paper that he snagged—portrays a culture in newspaper and snack wrappers. Quotidian exchanges and messages. Kommerz. 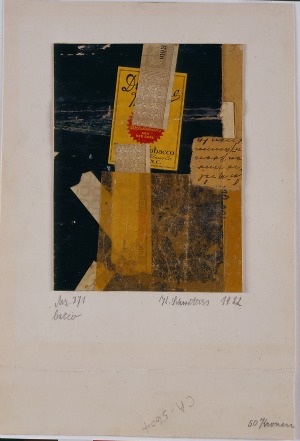 It makes sense that artists like Rauschenberg and Johns—who belonged to another culture awash in mass-produced detritus and junk—would be drawn to an artist like Schwitters. But whereas the American artists found themselves at the end of their war in a victorious and confident country whose self-certainties they could cheerfully mock and celebrate, Schwitters’ art reveals no similar insouciance in his chaotic but beautiful collages and assemblages. In Untitled (Erfurt-Erfur)(ca. 1924-26), any joy emerges as hard-won and struggling.  The blocks of torn paper seem to tumble down the picture plane in a raucous fashion. Despite that everything is torn apart here, there’s a kind of ecstasy in the deep blue juxtaposed against the cadmium red, which electrifies the work. Whether we’re witnessing an explosion of torn labels and ticket stubs and patterned papers, or the caprice of a playful child is hard to say. A scrap with what appears to be a child’s doodling suggests the latter, but whatever playfulness there is is shrouded by violence.  His time and place is not ours.

Throughout his life, Schwitters worked and re-worked what he called his Merzbau, which was never properly shown while he lived. The early 1980s reconstruction of the work on view at the Menil is the first time the piece has been shown in the U.S. Color and Collage is a handsome, thorough exhibition, and many of the works in it are exquisite and a privilege to view. However, it is Merzbau that makes this show an absolutely must-see.

Never mind that this guy was so far ahead of his time it makes my head hurt; the installation itself is fabulous. Its angles and odd bits of ephemera make it one of his collages in 3D. Although it is white for the most part, there is an occasional pop of bright red, and though the items and images within the structure are culled from pop culture of the time, I was surprised to find that the death mask of Kurt Schwitters’ little boy is included amidst the lot. After viewing the collages and assemblages, I had the sense that this artist was the most human of nihilists; the touching death mask in Merzbau completely convinced me of it.

The Menil Collection is the perfect venue for a Schwitters show, since it possesses many works by the artists who were so influenced by him. In the final room of the exhibition works of Rauschenberg and Twombly, among others, are hung together with some by Schwitters. This is a lovely and fitting finale. When I wandered through the reconstructed Merzbau, I realized that not only was it appropriate to host the exhibition in this museum, but that putting it in Houston was on the mark as well. If Kurt Schwitters were alive today, this remade installation would probably earn him the label of “visionary artist” and a nod from the Orange Show Foundation.

On the whole, though I found the assemblages occasionally interesting, I was more drawn to Schwitters’ collages, especially those that were very small. He was able to say so much, so beautifully, in such a small format, and I had a hard time being charmed by the other wall(installed) pieces. Within the collages, I also gravitated towards those in the bluer hues. I first thought this might simply be personal preference, but I also think that the darker pieces have withstood light and age better than their lighter counterparts. Oddly, I found Schwitters’ pieces most compelling when they were very tiny, as with the collages, or very large, as with Merzbau.

Kurt Schwitters died in 1948 in England and his first solo show in the U.S.  opened a month later. He never received his due, and the work he was most passionate about, Merzbau, was destroyed. He never got to see it on display. He never knew how much his works would affect generations of artists to come. Nor, I imagine, could he have anticipated the change in tone that his techniques would undergo in cultures and climates quite remote from his own. It is no small part of the achievement of Color and Collage that it allows us to experience that influence—and that difference—for ourselves.

Hello everybody Brand new member on the forum. I just figured to say hi. Hope that’s not against any rules or anything.

This is a great article.