In the United States, hyphenated identity art exhibits are well established and follow certain traditions, notwithstanding some impressive attempts to break the mould. LACMA made one of these attempts with its huge Phantom Sightings show, which travelled to San Antonio’s Museo Alameda this past spring. Billed as “post-Chicano,” the exhibit played with notions of Latino identity in a blizzard of self-awareness.

Unit B (Gallery) recently mounted Self-Revolution, which takes a similar approach to black identity. But curator and participating artist odie rynell cash has in some ways cast a wider net with a much smaller exhibit. Using just five pieces by four artists, Self-Revolution asks profound questions about identity without focussing too heavily on American culture. And although the artists are all black, the identity issues they explore have implications that reach far beyond African-American communities. 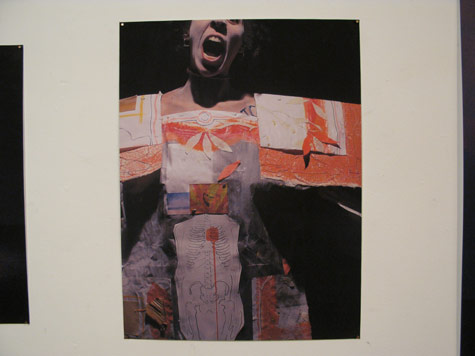 This performance was witnessed only by the performer (Akpem herself) and the photographer (Krista Franklin), whose documentary evidence we see on the walls of Unit B. It is a hybrid of African initiation ceremony, Japanese Butoh, and a host of personal referrants collaged into the costume and written on the body of the performer. During the performance, she sheds the costume and scrubs her skin clean as a kind of ceremonial cartharsis. This is an embrace of death and loss, followed by a cleansing ceremony. 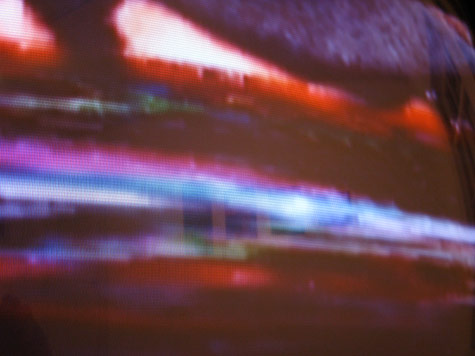 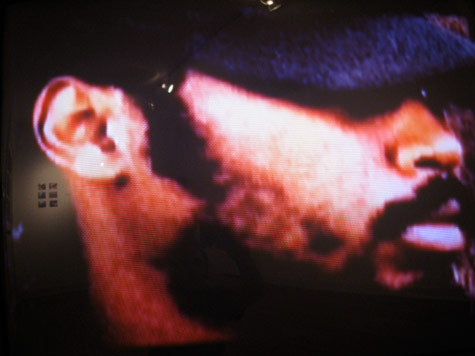 Make what you will of this: the heavy layers of (literal) media corruption over the ubiquitous mantra of the black anti-corporate, poet-revolutionary hero. Is the revolution dead because it succeeded or because it failed? Is revolution more possible in the media age or more illusory? Even after the so-called Green Revolution, we still don’t know.

Our gaze turns back to the introspection of Chicago-based Akpem, scanning closer to the embodiment of solitary emotional crisis and sublimation, given only as photographs. 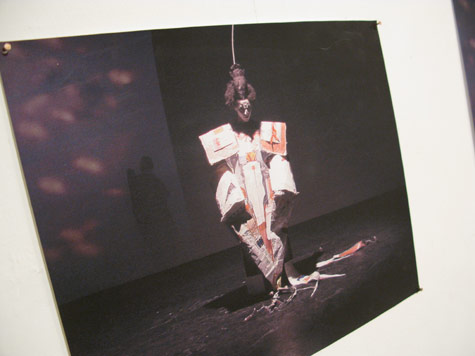 On our way to the next room of the exhibit, the photographs of odie rynell cash hang next to the door. The artist, fresh from Detroit, visits the small, right-wing town of Lokeren, Belgium. He hides a tiny gun between his thumb and forefinger, which he secretly points at strangers in the unwelcoming town. He gives us polaroids of his veiled aggression, and tells us he is addressing “right wing policies and a stereotype that is applied to people of color in this region.” 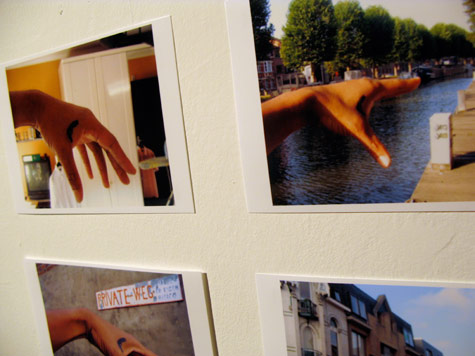 Now we are confronted with a bit of a dilemma. In a show ostensibly about identity, in which all other works are photographic in nature with human subjects, Ayanna Jolivet McCloud throws us a curve-ball: 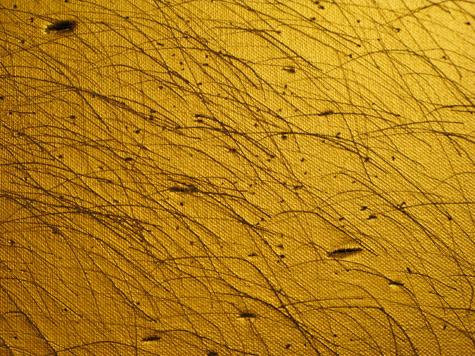 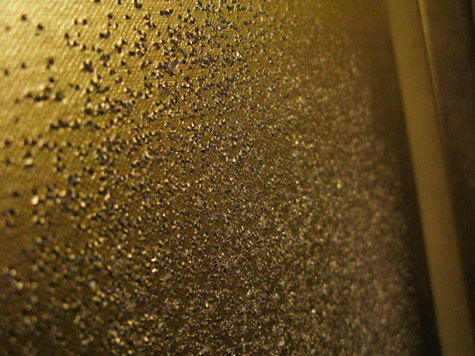 Documentations of Rhythm: 12×12 canvases painted gold with scratches and punctures. I reviewed the list of influences on McCloud’s website (a page which was taken down as I wrote this post), and figure we might as well consider this Lucio Fontana + DJ Screw. That kind of statement is probably why she no longer lists influences on her website. Still, those two links tie it all together, at least in my mind, bookending the word “revolution,” scratching and cutting us through all the permutations of media as freedom and media as oppression. This dynamic has played out perhaps most dramatically in black psyches subjected to caricatures of themselves propogated by their oppressors, who in turn captured the powerful art of the black community, dissemenated on black vinyl in white sleeves. But it’s a dynamic that has victimized us all, and set us all free.

“Matter, colour and sound in motion are the phenomena whose simultaneous development makes up the new art” — Lucio Fontana

Self-Revolution runs through November 7 at Unit B (Gallery) in San Antonio. The gallery is open Saturdays from 3 to 5 pm, or by appointment.