The Problem of Design Within Austin

Austin has a reputation. In his book The Rise of the Creative Class,
Richard Florida used Austin as proof that a “creative city” will
attract a substantial community of artists and creative individuals per
capita. 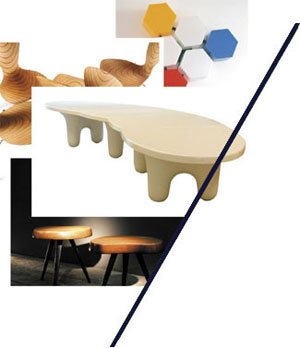 However, there is some concern as the current development of downtown Austin begins to change the economic realities, moving away from a small-town feel and toward a denser urban development. The city will maintain a healthy range of entertainment choices, but the question arises as to how local artists and designers will factor into this new vision of Austin.

This is what I was thinking as I walked into a little gallery space on the third floor of the University of Texas’s Co-Op on Guadalupe. Gallery 3, established in 2005, is a student-run exhibition space that presents the work of students, faculty and staff. The recent exhibition, a collection of work by six undergraduates from UT’s School of Design entitled Object / Type / Transform, presents topographic projects constructed with the help of curator Amanda Douberly. In the gallery brochure, Douberly explains: “Design is sometimes understood as a management of constraints, but limitations can inspire as much as they can check creativity.” The work of these six designers focuses on themes from typology to typography that they had worked on as class projects. Marti Manship rearranged the elements of a photograph of a bike rack, cut-and-pasting them into an unending sequential pattern, like a swath of wallpaper. Allison Lura envisioned a way to preserve the transformative moment of the breaking of a wine glass to symbolize union within the Jewish marriage tradition. By forming each broken glass from generations of marriages into a molded shape, she has constructed both a symbolic family tree and a functional chandelier.

While considering the general strengths and weaknesses of these works, I came to the realization that over the past three years I have rarely seen work dealing with functional or experimental design, especially outside of the university context. The Creative Research Lab’s summer exhibitions frequently provide the opportunity for designers to showcase their work, which is well and good. But keeping in mind the nature of student work, it’s mostly going to be of an experimental or conceptual nature and based on challenging methodology. Design seems to be a soft spot within the local gallery and museum scene. Given the changing exhibition potential within Austin, how will local designers find a public audience post-university?

I don’t want to advocate for a permanent experimental design exhibition space so much as point out that the continuing representation of local design and designers within Austin is at stake. The de facto design center of Austin, the Design Center of Austin at Penn Field, is the clearest example of what I’m trying to point out. Opened in 2001, the multipurpose space houses six local designers of interior wares ranging from tile to faux finishes. The lobby was recently used as an exhibition space to showcase the work of student art from Texas State University, San Marcos.

A possible model for how to incorporate design and art in downtown Austin could come from the design district of Miami. This area of downtown Miami was once a stronghold of the Craig Robbins family. The area went through various changes, but with the intense redevelopment of downtown Miami, it has snapped into shape. It has directly benefited from urban growth — not just as a shopping district, but as an integrated space for social interaction. This area of Miami has both a day and night life, which derives from its central focus on design.

Recognizing that Austin is going through a similarly rapid urban redevelopment, the city should be reminded that part of its strength lies in the local talent that can afford to live there. “Keeping Austin Weird” will get tricky in light of the mayor’s proposal to add occupancy for some 25,000 residents in the downtown area over the next 10 years. Hope is in the air that this change will accommodate the limitations of local resources and the voices of local residents.

Edwin Stirman is an art historian currently living in Austin. Stirman is orginally from Miami. 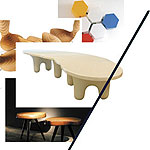 Yes, you’re right, Austin has a reputation. You can’t hardly go anywhere else in the country without people saying good things about Austin (even people who’ve never been to Austin). And deservedly so, since Austin is chock-full of good vibes. But the question of how Austin’s artists and designers will factor into a changing Austin is less important, I think, than the question of the impact that Austin’s artists and designers will have on a regional, national, and international level.

Home-grown art and design is woven into the very fabric of Austin. You see it everywhere. Boutique stores and artist-run galleries and upscale restaurants and casual coffeeshops. It’s pervasive. It’s proud. And, much of the time, it’s good. But, from your article, it seems like you’re looking in the wrong places. The Creative Research Lab is all heart. It’s student-centric, and somewhat sterile, because it’s rare that a student’s experimental ideas about design will survive and prosper outside the petri dish of academia (too many worldly realities come into play).

On the other hand, there’s a great deal of experimentation happening in Austin’s mature, professional art and design community. Curiouser and curiouser, it gets. Did you happen to see the Floating Chair Exhibit sponsored by Design Within Reach in downtown Austin last year? What about Sally Jacques’ Dancing With Buildings performance? Or the intrepid projects of Austin Green Art? And then there’s the Architectural Artisans Collaborative – a group of artisans in the Austin area who are committed to introducing art and design into buildings throughout Austin. What’s interesting about these examples is that each one is uniquely Austin – but relevant far beyond Austin’s borders. That’s the thing to watch coming out of Austin – not how Austin nourishes and protects it’s local talent (they do it already), but how it’s local talent will impact the world.

If you’d like to get involved in this further, I’d suggest you contact Janet Siebert at Austin’s Cultural Planning Office. Until Jun 15, they’re accepting proposals and input from anybody who wants to suggest ways to reshape and redirect Austin’s art and design future. Your ideas, I think, would be welcomed. It’s called CreateAustin. It’s happening now.

Thanks for your words.