New Art in Austin: 22 to Watch

Austin Museum of Art’s 22 to Watch is a welcome opportunity to get a look at a core sample of Texas visual art. The jury — AMOA’s Dana Friis-Hansen and Eva Buttacavoli, along with TSU Associate Professor James Housefield, Dallas Center for Contemporary Art Director Joan Davidow, and Galveston Arts Center curator Clint Willour— chose what they considered the best, and perhaps the most representative work from within a 100-mile circle around the state capitol building. 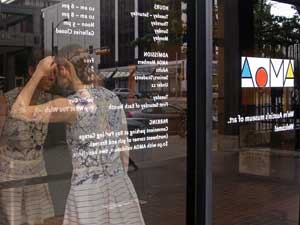 
After looking at over 145 artists, visiting 35 artists in their studios, and consulting some key members in the community, they selected 22 for the exhibition. To look for any regional consistency would be in vain, as the resulting show is a hodge-podge of (mostly) freshly minted MFAs, ready for New York, for better or worse.

That said, the work can be grouped in several broad, if rather predictable categories: 1) explorations on creating and picturing identity; 2) craft and labor; 3) fantasy and pseudo science; and 4) collaboration, interactivity, and fun-house spectacle.

Ruminations on identity is seen in many media. Jeffrey Dell’s traditional well-crafted prints of ghostly architecture and flocks of birds suggest an identity fixed in place: in this work, a two-year stint in Venice, Italy on a fellowship and his current teaching gig in San Marcos, TX. Karen Skloss’ psychological self-portrait is a double-screen video, employing typical conventions of avant-garde filmmaking (anti narrative, arty slow takes, a meandering script) all musing on the experience of single parenting. 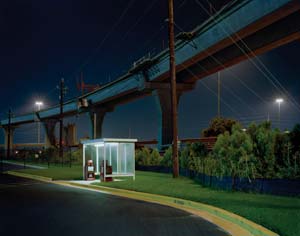 There’s lots of photography throughout the show. Michael Osborne’s’ luscious large-scale photographs are succinctly representational, albeit fleetingly so: by situating his camera in specific locations in construction sites that will not exist when the building is complete, he turns viewers into ghosts of the future. Again, the context for identification is place, specifically Texas, specifically Texan construction. Shaune Kolber’s photographs are also rooted in a sense of place . He travels to the scenic vistas at national parks made famous by the likes of Ansel Adams and William Henry Jackson, sets up a large-format camera, and photographs the clustering tourist photographers. The breathtaking natural beauty is an out of focus backdrop to the inscrutable human need to preserve it (at least on film).

Alia Hasan-Khan, a newcomer to Austin, travels and takes pictures of waiting areas, bus stops, airport terminals, and other travel throughfares. Her collection of six postcards, displayed on a souvenir shop rack (and free for the taking), demonstrates the loneliness of a traveler, much of whose time is spent standing and waiting. She has printed their backsides with ruminations on travel experiences from local Muslims in a post 9/11 world. It’s a bit sentimental and schmaltzy, but effectively conveys a sense of dislocation using a relatively homespun, analog medium of communication.

Sterling Allen’s quirky line drawings of randomly collected snapshots present goofy scenes of people mugging for the camera, performing acts best left unexplained (like a mother with her son, who wears a ski mask and holds a shot gun). Allen removes all racial and cultural associations by reducing the figures to line drawings, creating an eerie unrealness in otherwise prosaic subjects. 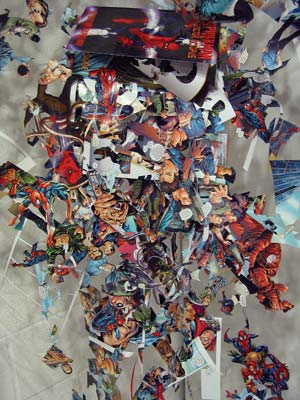 
LABOR, CRAFT, AND THE REAL OBJECT

Some works in the exhibition emphasize the art as the production of diligent labor. The two lonely, somewhat weak painters in the group use their skills to different ends. Trent Tate’s canvases are carefully crafted egg-tempera portraits of whatnots — a toad, a brick, a fish — which hover magically in mid air between certainty and creepiness. Jonathan Faber’s large oils are abstractions with some representational moments loitering around that don’t make themselves heard loud enough. They are spiced up with pleasingly bright color field-y shapes.

Candace Briceño makes “grass islands,” miniature landscapes of grass and flowers painstakingly sewn from wool felt. Their pop colors and diligent handwork give them a whimsy and an elegance at the same time. Heather Johnson miniaturizes highway intersections, hand embroidering them as maps on polite white linen. She further commingles delicate fiber work with brute roadwork by recreating an interchange with nails and thread, expansively covering two entire walls. Johnson notably is the founder of a project called Cracks in the Pavement, in which artists leave art out in the world and let the thrifty viewer-cum-collector go on a treasure hunt for it. Also miniature, Daniel Tackett’s little found object combines look like crusty old inventions that seem to have escaped from some nearby historical museum (perhaps from the Surrealist Wunderkammer at the Menil Collection). 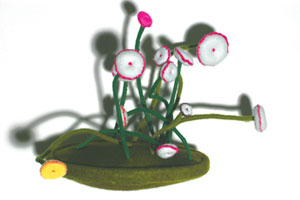 
FANTASY AND THE SCIENTIFIC

For 22 to Watch, Peat Duggins has re-created a portion from The Battle of Hickory Ridge, his installation last year at the Fresh Up Club. Part wacky fantasy and part wry critique both of suburbia and the artistic practice, he presents a trompe l’oeil desk and work of his character The Architect, who is chronicling the story of Hickory Ridge, a tract-house subdivision plagued (or protected), by fleets of zeppelins and jets. Duggins’ cartoon-like art-film director style plays out in his installations like a movie set, complete with director’s chair and all his notes. The Battle of Hickory Ridge is folksy send up of our insatiable desire for social cohesion in the face of unendingly splintering market forces.

Young-Min Kang does his own splintering of fantasy. In a gloriously complex wall installation, he has cut up an entire Spiderman comic book. The final form climbs up the corner of a room in a very, well, spidery way. His other installation of a blown-up digital photograph of a street scene (also seen in the Texas Biennial), cut into strips, doesn’t fare as well. Even in its fragmentation of reality, it remains a supersized picture. Where Kang transcends with his installations is when the images and their presentation are integral to each other. In the 2004 exhibition Construction Site, he showed a giant rotating object that had an image of a face stretched out around it — only from one angle the the distortion collapse into a recognizable subject.

In what seems to be the Science Museum section of the show, some pieces deal with familiar found materials and our basic sense of perception. Soap bubbs are Samantha Krukowski’s medium. She mixes in ink before blowing them over sheets of film. As they pop, a drawing is created. An accompanying video projection reveals the bubbles in action, bringing to mind early photography’s use by curious science types (or Roxy Paine’s ink Drawing Machine, seen at the Contemporary Arts Museum, Houston in 2003, which drew ellipses over the course of a month, part science project, part drawing). Barna Kantor pares his work down to very simple material juxtapositions, hanging imposing panels of metal in close parallel pairs. Their identical perforations create throbbing spherical volumes as we gingerly walk past. This piece was also seen at a much larger scale in Construction Site, and it again clearly alerts the viewer to his literal complicity in image making.

Ledia Carroll uses the environment around her, in this case water, to intervene and reinterpret our landscape. She has rerouted water from the odd fountain outside of the museum to flow through careening pipes that punch through the walls and zigzag around an interior space. This slightly threatening hydrology is countered by another architectural intervention by Hana Hillerova. A mixture of abstract form and photographic material, her almost painterly installation explodes from a corner, alarming the viewer with its precarious presence, but never to the point of falling off balance (almost like someone was holding her back from spilling out onto the floor).

There is always an unspoken act of collaboration between artist and viewer in the act of looking at artwork, but when it becomes more explicit, it often fails. Though the group called Sodalitas presents a large-scale painting, its many sections and multiple authors don’t inform its urban industrial collaged content. Jerry Chamkis’ attempted collaboration with the cosmos, with a gadget that makes sound compositions out of passing gamma ray emissions, results in a nice piece of hardware to consider, but the "music” seems canned. The Post-its die-cut with leaf-shapes, arranged as foliage on a wall painted tree by Hunter Cross, the youngest of the bunch, fails to entice many viewers to participate in their infinitely possible rearrangement, perhaps because the notes’ glue was too sticky. A blowing fan couldn’t make them flutter to the ground, encouraging action.

Zack Booth Simpson’s elaborate “pond” surrounded by real plants was a good idea that lapsed into amusement. His projected computer animation of watery ripples and dragonflies reacted to viewers who jumped in and “waded” in the pressure sensitive pond. Simpson tries to minimize the funhouse aspect of his interactivity by punishing viewers who move too quickly over it — the animation stalls out.

Jason Singleton literally and metaphorically pulled off the most effective bracketing of 22 To Watch. In a gesture that is unsettling for its institutional implications, funny in its self-deprecating minimalism, and almost forlorn in its lingering effects, Singleton reversed all of the information text: logo, admissions, hours, even the “PUSH” on the door handles, on the glass façade of the museum. It took more than a minute to realize what was wrong, so quick are our minds to flip what we see to the “correct” reading. Singleton approaches the exhibition with the same wit and humor as Maurizio Catalan both of whom play with the viewer, leaving open to interpretation whom the joke is ultimately on. Singleton’s gestures is sincere even though it’s on the level of an impish prank .

Kathryn Hixson is a writer and PhD student at UT currently living in Austin. 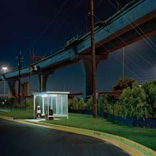