Land Arts of the American West

The landscape’s singularity it thus not something which a bit of topography does or does not possess; it is rather a function of the images it figures forth at any moment in time and the way these pictures register in the imagination. 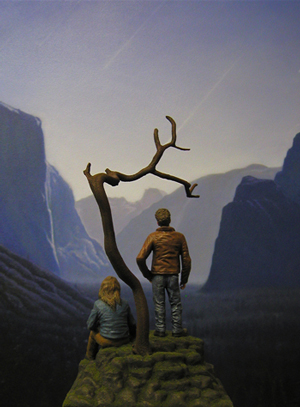 The landscape’s singularity it thus not something which a bit of topography does or does not possess; it is rather a function of the images it figures forth at any moment in time and the way these pictures register in the imagination. The landscape is not static but constantly recomposing itself into different, separate or singular pictures.

– Rosalind Krauss, The Originality of the Avant-garde and Other Modernist Myths [1]

I am often tempted to think about land art in a historically narrow sense, as Earthworks belonging to the late sixties and early seventies with few contemporary artists continuing to make work involving the physical land. While both the context and monumentality of earthworks projects have undergone a shift (with the exception of James Turrell’s Roden Crater and Michael Heizer’s city, although both projects got started in the 1970s), the land continues to be a vital source for many artists. Always present, the land offers an overwhelming geologic history, perhaps best understood through direct experience. In a culture growing ever more displaced, the land is a binder, a vestige of the past and the present place in which our daily activities take place. That said, we no longer have to think of earthworks as part of an imposed polarization between nature and culture, but rather as something inherent to our lives as human beings who live within the land.[2] 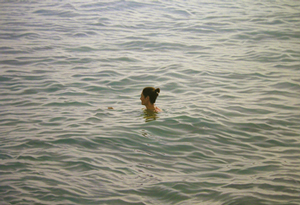 Bill Gilbert and Chris Taylor, Land Arts founders and supervising faculty, define Land Arts practices as “including everything from constructing a road, to taking a walk, to building a monument, to leaving a mark in the sand.”[3] Combining studio artists from the University of New Mexico and design students at The University of Texas at Austin, Land Arts immerses its participants within a travel experience based on ancient and contemporary land art sites. Living in tents and traveling throughout the southwest, nomadic Land Arts students must not only create their work, but also engage with a variety of sites, guest scholars and artists from fields as diverse as their destinations. Students have to negotiate and reconcile ancient sites such as Chaco Canyon with places like Turrell’s Roden Crater, and they are confronted with the aesthetic role of abandoned military installations in Wendover Utah, as well as more popular artistic interventions, such as Robert Smithson’s Spiral Jetty.

Questioning the definition of an “earthwork” and more specifically, an artistic practice within the land, the Austin exhibitions Land Arts of The American West 2004 focused on the work of current Land Arts participants, and Terrestrial Arcs, on four Land Arts alumni.

Curated by Gilbert and Taylor for Plan B Gallery, Terrestrial Arcs is about not only a connection to the land, but also a movement beyond what we already know about it. Featuring alumni Ledia Carroll, Elizabeth Hunt, Ryan Thompson and Gabriel Romero, Terrestrial Arcs presents a diverse group of works. Motorized plaster figures, part plant, part animal, part trash, whirl around a sandbox in Hunt’s work Some See Fluorescent Fish as Neon Signs of Trouble. Romero, in a trashy pink faux-fur bunny suit, accosts shrubs at various speeds in his video installation L’il Bunny Krunk. Hunt and Romero’s works, while playful and entertaining, fall into familiar commentaries regarding apocalypse, man’s negative affect on the environment, and the role of the art object. 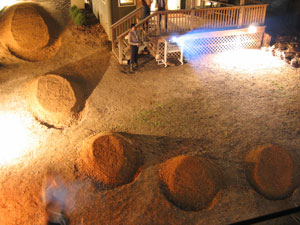 Ryan Thompson’s photographs combine documented images of contrails with his tracing of them on the dirt in a dry riverbed. Creating a new horizon line and moving beyond the usual function of the diptych format, the vertical works are most successful, establishing a new landscape, rather than merely juxtaposing two different images. Thompson’s photos skew our typical notions of this relationship by forcing us to perceive a macroscopic view of the sky in direct proximity to a microscopic view of the ground. Removing all intermediaries — buildings, mountains, trees — between the earth and the sky, Thompson focuses our attention on their relationship through both his duplication of the contrails form in the earth, and their subsequent juxtaposition in the finished images.

Ledia Carroll’s 6 Lenses is a series of earthworks that explores the effects and changes in perspective when something is viewed from ground level and then from above. Created by tracing the diffusion of a single light shone onto the ground from an overlooking balcony, Carroll’s lenses resemble elliptical heaps of soil with an angular slice removed. The remaining area creates a face that becomes more and more steep the closer the shapes move to their source. Made of decomposed granite, six lenses varying in scale fill the L-shaped outdoor courtyard. On the ground, one is aware of the overall sheared conical shape, the small depression in the earth they emerge from, and the shift in scale between lenses. I tend to think of each of the lenses as the same one, evolving and fluctuating as it moves within the space, its phenomena-based movement arrested to provide a direct experience for the audience.

From the balcony, one is aware of their perfectly level faces, how they capture the light and how the form is affected by proximity to the source. Using soil to capture the physiographic effects of light, Carroll’s piece is about capturing an optical phenomenon, but also dissecting, measuring, and mapping it, so that our perception is never what we expect. The lenses heighten our awareness of the perspective, and how position ultimately affects our own perception (and subsequent understanding of the form and its underlying phenomena. Capturing phenomena and utilizing them to create a new experience of our environment, Thompson and Carroll’s work evidences a definition of land art that brings earthworks back into our environment. Urban locations become a more viable site than a remote location in the desert, as they are the spaces in which we live, and that we perceive on a daily basis. Evolving beyond the historical moment of Earthworks, these pieces bring a complex knowledge and curiosity of the land back into our cityscapes to examine our places and their relationship to the natural world. 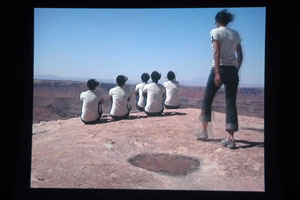 Having recently returned from their 48 day, 9,000-mile journey, the current group of Land Arts participants recently exhibited a substantial amount of work at The Creative Research Laboratory. The sheer numbers make evident the numerous approaches to, and definitions of, land art practice. From the work shown, smaller groups begin to emerge: objects from work executed in the field by Tracey Stuckey, pots made in Mata Ortiz Mexico by Ben Tremper and Julie Brown, and landscape photography by Mariah Williamson and Nina Dubois, just to name a few. Also present was a large program of video work and a performance by Mark Hensel. Grant Davis’s Lined Arts, Carissa Leos’s Six Toilets, and Alex Codlin’s We Are Water, left me with a tremendous nostalgia for traveling in the desert. These drawn portraits of participants, toilets as a mile marker, and water bottles as surrogates for people map the many aspects of the travel experience for us. How this variety of media and conceptual approaches work together to create a larger picture of land art practices is an engaging aspect of the exhibition, one that is often lost in an installation where the work is interspersed together. While necessity, aesthetics, and numbers probably dictated the installation choices, I can’t help but try and envision an exhibition setup that makes distinct separations between the different groups of work, directly asking us to re-examine our definition of land art.

While much of the work falls into distinct categories and modes of working, a number of pieces were engaging, both in and across pre-established genres, expressing a curiosity and investigation of the land in a complex, layered way. Veronica Giavedoni’s stunningly simple and engrossing video loop Horizon Run shows a figure re-appearing and running across the Bonneville Salt Flats in Utah. The repetition creates a straight line of figures receding towards the horizon, emphasizing the vastness of the space and the scale of our bodies in relation to it. The simple action of running becomes not only a way to map the space of the Salt Flats with one’s body, but a tremendously intimate experience and a way to relate to the vastness of the land. 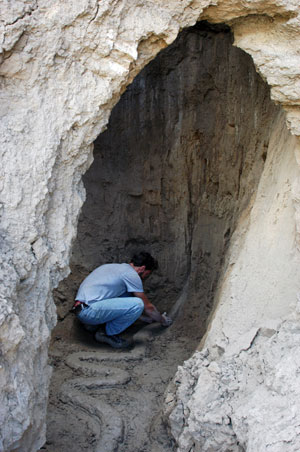 With baby oil and lip liner imprints of the body, Erika Osborne’s Skin of Place is a small drawing made in Blue Notch, near Lake Powell in Utah. The pinkish brown tones of the body imprints on paper create a subtle image where the body becomes a tool for drawing and recording the landscape. Skin texture becomes the topography of the land and simultaneously evokes the tactility of the earth and body. Osborne’s drawings recall a moment before the widespread availability of technology, when artists were carrying their canvases and drawing boards outside, producing paintings and drawings that recorded the land and their experiences within it. Both Giavedoni and Osborne, through starkly different media, bring the individual human body back into the boundless landscape, questioning place and how we understand ourselves within it.

For Wondrous Monsters and Monstrous Wonders, Mark Hensel filled a small antique vitrine with Polaroids from a number of Land Arts destinations, a fossil and potshard from Cebolla Canyon, and a book that was part of a performance occurring on the final day of the Land Arts trip. Reminiscent of natural history museum displays, Hensel uses the vitrine to sort of “museumify,” preserving the objects but rendering them as data — cold, devoid of context, and possessing the memory of a specific time and place that, as a non-participant, I can only imagine. Inspiring curiosity by their simple placement within the “vacuum” of the vitrine, the objects become artifacts, proof of an experience and the residue of a history at once fantasy and reality. Infusing its contents with a history and importance, Hensel’s vitrine makes a very recent experience instantaneously historical and mythical.

Reaching beyond the limiting definitions of historical moments and methods, Land Arts and its work can be seen as engaging in a complex dialogue with earthworks that are sustainable in all types of landscapes. Whether in the city or on the playa, the land provides a set of materials and circumstances which allow diverse and purposeful investigations. Using the land and the travel experience within it as a material, the most successful results are those that move beyond site and temporal restraints, allowing the audience to enter the work, seamlessly relating it to their own perceptions of the landscape.

1. Rosalind Krauss, The Originality of the Avant-garde and Other Modernist Myths (Cambridge, Massachusetts: MIT Press, 1985). [return to article]

Eric Zimmerman is an artist and writer living in Austin. He will receive his MFA from the University of Texas at Austin in May of 2005. 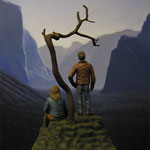