Exploring the intersection of utopian architecture into our culture, Finesilver Gallery has brought together two artists that focus on landscape, isolation, and community. 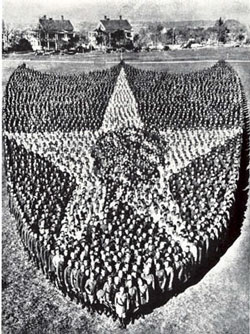 On the first floor, Chicago artist Angelina Gualdoni presents Fringe City, six paintings that depict a somewhat desolate landscape. While she investigates various states of ruin, Gualdoni also presents an optimistic viewpoint. Her isolated representations of city, suburban, and country structures are not just records of a declining society, they are imbued with a hopeful outlook for renewed generative life. Gualdoni’s small watercolors and gouaches on paper and her large canvases are each a portrait study of a collapsing and dilapidated form that recalls and echoes the memories of past inhabitants. Particularly nostalgic is New Heaven, Taos, New Mexico, (2003), wherein a rickety log cabin with a torn American flag placed in the doorway somehow appears heroic among the forest of trees in which it stands. The cabin, positioned in the right foreground of the canvas, is surrounded by greenery while the background blazes with what appears to be the rays of the breaking sun. Alternately, the glowing pinks and yellows may portend an approaching fire that will consume this frail construction, creating uncertainty as to whether the scene is one of hard-fought survival or imminent destruction. 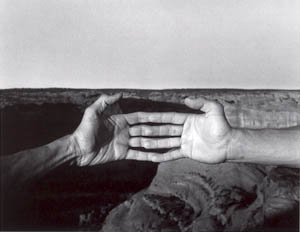 In Everything Remains to be Done (2003) Gualdoni once again ambiguously plays with the possibilities of the past and the future. Here she depicts a suburban development with sidewalks and driveways traversing a patch of green and leading to a row of identical homes with gaping mouths for garages. At the end of the row stands the framework for two additional buildings. Are they about to be completed, is the project abandoned, or are they in the midst of being torn down? Despite the questions that Gualdoni raises, stillness and quietness suffuse this image along with several others in the exhibition, reflecting the time of day the artists chooses to depict — often dusk or dawn.

With most of the paintings shown, it is impossible to tell if the sites have grown from the artist’s imagination or if they are depictions of real places. But one image does reflect an actual locale and event. In the diptych, Two Inevitables (for Corbusier) I and II (2003), the point of reference appears to be the recent demolition of America’s most notorious low income public housing project, Cabrini Green in Chicago. These tenements were torn down this year to make way for an innovative new housing development — town homes and condominiums that integrate upper middle class residents with government-subsidized neighbors. In this work, the artist renders the destruction as if in slow motion — the swaying collapse of the buildings suggests pounded-down clay. Outlines of newer, sleeker, highrises are sketchily portrayed in the background, allowing for washes of gold and orange to shine through, suggesting the breaking of dawn with the rising sun — a metaphor for community renewal. 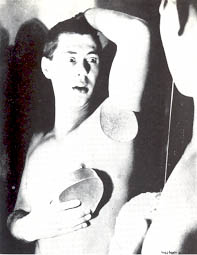 Clearly resonating with Gualdoni’s work, New York artist Erik Benson’s exhibition Perfect Memory brings together eight canvases in the upstairs gallery that also address architecture and urban atmosphere. In his unconventional paintings, Benson plays with perceptions of depth and flatness by building up layers of paint that he initially poured onto glass. He then allows the paint to dry before he cuts it into the desired patterns, removes it and finally meticulously applies, or collages the pieces onto canvas. This process can be deceptive, as it is not always easy to discern where he builds up the paint, scrapes it away, or applies the cut out forms. The results are low reliefs with a seamless background and obvious manipulations in the foreground. Contrasting with the opaque ground of the canvas which he has built up, the colorful translucent blocks and strips of color that Benson applies are reminiscent of automobile detailing strips or press-on Colorforms. This way of working echoes the precise layering of materials that architects and construction workers use to create various buildings. Bringing to life the structures of amusement parks, playgrounds, buildings, bridges, and their surrounding urban environment, Benson reduces the human elements into tactile blurs of movement that are suggestive of snapshots with long exposures, which he juxtaposes with the static, high contrast elements of architectural forms. In fact, humanity seems stripped away in each painting, where the scene is frozen in the moment before the city wakes up and becomes a frenzied metropolis.

All the paintings seem to hover in this time of early morning except Long Way from Home (2003). Here the windows of multiple highrises are positioned against a black background behind the streaking remnants of car lights on the expressway, and are suffused with glowing oranges and reds, again providing a hint of the presence of people. The colors and energy Benson imbues his paintings with give breath to what would normally be a cold structure of concrete and steel beams. Instead, each building becomes a personification — without sentimentality — that speaks to the character of a thriving city. In National Anthems (2003) the all-white buildings fade into the background and the focus is on the trees lining a pedestrian bridge. Slightly off-center, attached to the structure of the walkway, is an American flag (the flag in this work is a coincidental, but nice tie to the Gualdoni’s piece referenced above). Benson explores the anonymity of what is distinctly an American urban environment — modern buildings and vistas along with a style of playgrounds and amusement parks that are unique to, and ubiquitous in, the United States. With the work This is Tomorrow (2003), this point is especially apparent — while many cities adopt a distinctive architectural vocabulary, playgrounds are always the same. Benson repeatedly layers the arching forms of a jungle gym creating a brown, red, and orange maze of forms densely built up on the surface that stand out starkly from the white buildings modeled in the background. Empty of playing children, this painting causes reflection on how easy it is to be subsumed into city life. Mediating on these themes, Benson renders the primary accouterments to life in a modern city — housing, avenues of transportation, and areas to play or break free from the stresses of living in an urban atmosphere.

Jennifer Jankauskas is an independent curator and writer living in San Antonio. 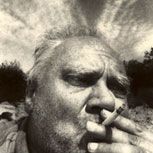