In Son of Sampson, Hills Snyder has taken up the gauntlet of making revolutionary art with a loaded installation of subtlety and grace. 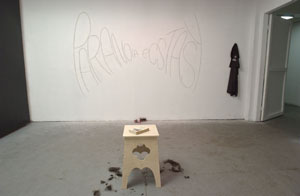 The installation includes trenchant little phrases inscribed on the walls, altered symbols, miniature sets, and the detritus from a short performance which occurred on opening night. The performance involved Snyder (a.k.a. Son of Sampson) getting his hair cut by artist Nate Cassie (a.k.a. The Barber). The Barber wore a black shirt with the words "head Curator" on the back. Son of Samson was all in white with a black barber’s cape. After a short dialogue and the haircut, the cape is flipped to reveal the words "titan reformed," which Son of Samson wears while being led blindfolded by the Barber from the scene. The reaction of some who saw the performance opening night could best be described as “nonplussed.” Fortunately, the installation itself picks up the slack.

Ridge and Furrow is an is unflinchingly political piece consisting of a U.S. flag that only has red and white stripes — no stars. It’s prosaic and familiar, yet strangely foreign. The work functions simultaneously as a political allegory and an exploration of purely formal issues. Without the stars, the flag loses its implicit suggestion of individuality, suggesting a rigid, homogeneous society. Formally, it connects geometric abstract painting with fiber art, calling for a reexamination of the divisions between high art and craft. Snyder’s light hand does not spell out one message for this piece. Instead (as with all of the pieces in this show), layers of meaning must be dissected. 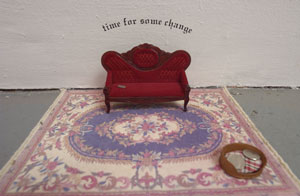 Snyder does not hand out easily digested one-liners. His work is as complex as the plots of the novels that are stacked up in some of his pieces. I found myself watching as viewers circled the room piecing together clues, as reality loops permeate the conceptual locus of the work. In a piece titled Fuzzy Logic, the book Don Quixote rests casually on a wooden table that, upon closer inspection, is the same table that appears in the illustration on the cover of the book. In Phone Booth, the words "Hail mute beast!" hover above an antique mirror. The viewer is given this powerful command just as he encounters his own reflection.

In an email interview, Snyder generously shared information on the subject matter of his work, but his layered responses were much like his work in their persistent implication that the deeper meaning was something viewers would have to divine on their own. This became particularly clear in response to one of my questions:

Felice Koenig: One thing that seems clear is that there is a message in each piece, and together the work sparks dialogue and thought. Yet it seems that you expect a lot from the viewer. I observed people responding to your show. Each of them trying to decipher clues and connections. Is there a reason you create such a challenging puzzle for the viewer? 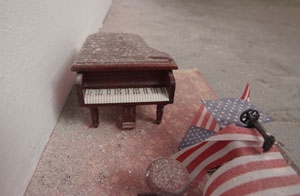 Hills Snyder: In a culture in which people sit in running automobiles for three hours waiting to buy a donut, I am seen as expecting a lot from a viewer. That is truly hilarious. But of course, I wouldn’t want to waste your time. People are going to do what people are going to do, but I do promise I’m not acting the trickster or trying to put you on. What I’m offering will stand up under any level of scrutiny you want to give it, so if you want a rich experience, it’s up to you. But if you want a donut . . .

This is not a show that you can breeze through, and you will probably leave feeling slightly unsettled. It is difficult and ponderous, and visitors who want donuts out of their art-viewing experiences are going to leave looking for a quicker fix.

Felice Koenig is an artist and writer living in San Antonio. 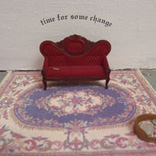