I first learned about Texas’ post office murals in 2011, while I was working at an art gallery in Houston that focused on early Texas art. On my desk sat a book called The Texas Post Office Murals: Art for the People by Philip Parisi, which has since become my guidebook on this journey. These aren’t just any murals — they are the product of President Franklin D. Roosevelt’s 1930s New Deal efforts to provide tangible relief to working Americans, including artists. I have a great fondness for the Works Progress Administration (WPA) era, in which the federal government, among many other projects, sponsored the production of art for public consumption during the Great Depression. (Art nerd alert: I should point out that the post office mural project was technically funded by the Section of Fine Arts.)

I suppose what I find so fascinating about projects like the murals is that the U.S. government recognized the value of art in bringing beauty and inspiration into the daily lives of ordinary citizens (which is hard to believe in today’s political climate, when arts funding is usually first on the chopping block). What could be more democratic than placing art into the public space of a post office, which was oftentimes the social gathering place for small or rural communities in the early 20th century? So, my discovery that I could easily access these WPA-era relics within my home state kicked off a lifelong mission to visit and photograph as many of the murals as I can during my travels around Texas.

Originally, the federal government commissioned 106 artworks for 69 Texas post offices and federal buildings. Several of these have been lost or irrevocably damaged. In 2004, when Parisi published his compendium, he counted 61 murals he was able to view and document. Although some of the murals can be found in larger cities (ex: Fort Worth, Dallas, San Antonio), many are sprinkled throughout small-town Texas (ex: Anson, Eastland, Hamilton). And that’s one of the many treats about this project: getting to encounter the small communities and town squares of the Lone Star State that I wouldn’t normally experience. Although each mural is different, I can often find my hidden treasure shortly after the GPS has guided me to the heart of the town; it’s sort of like being pulled into a magnetic forcefield. Somewhere just off the square or town center sits an unassuming, 1930’s-designed post office. Enter the front door and look for the original postmaster’s door. Right above that door you find your prize: the post office mural. 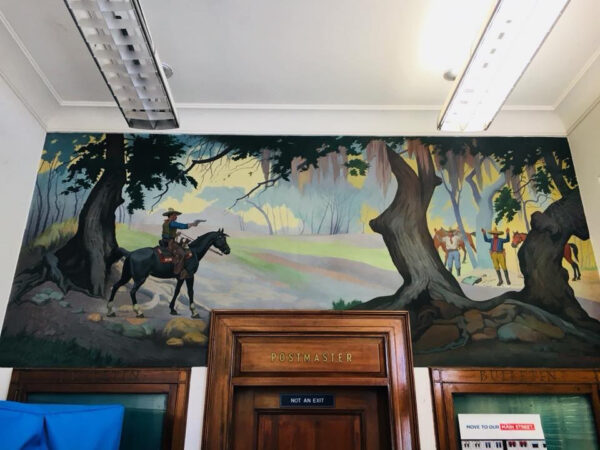 The style and subject matter of each mural is simple and direct — no previous art experience or knowledge is necessary to appreciate the paintings. Most murals represent the town’s key industry, defining features, history, or the spirit of the region. Are you a history buff? Then visit El Paso’s mural, which portrays a montage of the settling of that region, from the explorations of Spain’s Coronado and his conquistadors, to the vaquero and subsequent Anglo settlers. Or take a stroll through Amarillo and see what I consider to be the granddaddy of all Texas post office murals, due to its size and scope. This collection of six mural panels shows a timeline of the development of the Texas Panhandle, with another appearance of Coronado on his quest to find the legendary Seven Cities of Gold in nearby Palo Duro Canyon, all the way to the establishment of the local industries of cattle, oil, and agriculture.

What best represented a town’s identity in the 1930s and 1940s? Gather your clues by looking at post office murals in Trinity in East Texas, where its lumber industry loomed large, or Alpine in far West Texas where the college (now Sul Ross State University) was as much a point of pride for its citizens as the nearby mountainous landscape. And what’s one of the most classic symbols of the Lone Star State? The longhorn, everpresent, makes its appearance in several Texas post office murals. 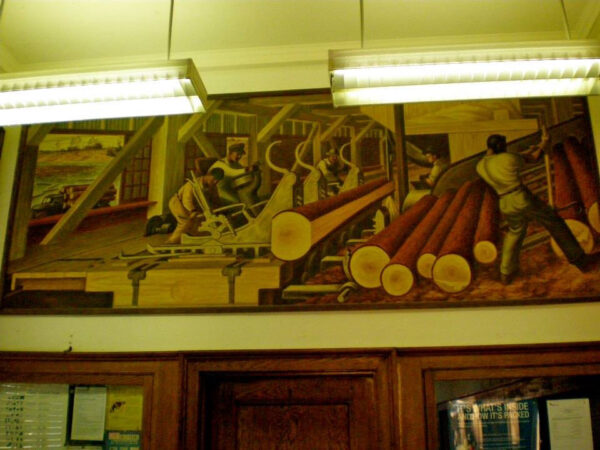 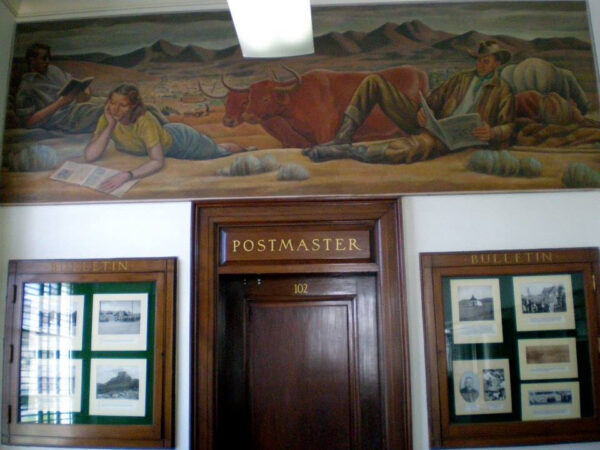 Who painted these murals? Artists not only from Texas but from all across the country, as each selection was made through a competition of anonymous submissions. A roster of familiar names (depending on your knowledge of early Texas art) includes: 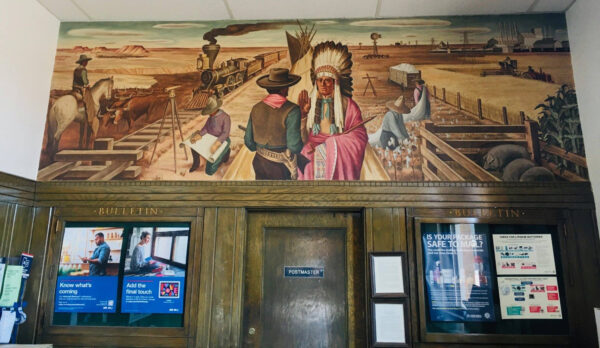 If you plan on starting a post office mural journey, a word of advice: be flexible. Not all murals remain in their original location. The Arlington post office building has been through many iterations, the most recent of which (the last time I checked) is as a branch of Worthington National Bank. When I visited the bank long ago, the mural still hung above the original postmaster’s door (which now houses offices for the bank’s employees). But within the last few years, in an effort to better preserve the mural, the 1941 painting moved to the Amon Carter Museum of American Art, where it’s on display across from the museum store. Similarly, the Odessa mural (which, full disclosure, remains my favorite PO mural I’ve visited to date), moved from the town’s post office to the local Ellen Noël Art Museum, which restored the painting. Today, while the Odessa museum undergoes an expansion, the mural is on display down the highway in Midland at The Museum of the Southwest. 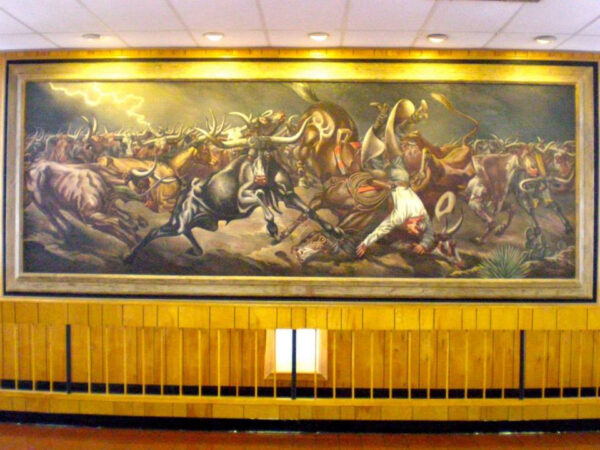 As of this writing, I’ve visited 23 Texas post office murals (and a few more just beyond the borders of the state). Each visit carries not only a unique memory of the mural, but of my journey to the mural and the people and sites I encountered along the way. I hope you’ll join me in this short series as I take you around different corners of the state, exploring the hidden treasures of small town Texas through its post office murals.

Thank you! We absolutely love these and much like you have followed them since Parisi’s Texas Post Office Mural book came out.
Cooper & Hamilton Texas are a couple of my favorites, but they are all so special!!

Leslie, can’t wait for the next article of this series. I agree with you on your favorite mural, but Quanah by Bywayers has to be a close second!

I’ve been to everyone of these Post Office murals in Texas. My favorite is in Electra because it was done by Allie Victoria Tennant, whose biography is a Texas A&M University Press book that I wrote.

Great article, Leslie! My dissertation centered on the TX PO murals, and I’ve visited all but a few that are harder to access (no longer in public spaces), taking high-res images and researching in local/regional collections/libraries, etc. Doing a lecture series at the TTU museum on them this spring as well, while I figure out the best way to publish my research.

These are treasures but what should be done about the racial stereotypes in them? Have any of them been defaced?

My favorite Depression-Era post office mural is the slightly surreal “The Corn Parade” up in Mount Ayr, Iowa:

I’ve been to several of the post offices and also the federal Terminal Annex in Dallas (Peter Hurd murals) and, in some cases, asked the postal clerk if tourists come by to see the mural. Most say Yes but one seemed surprised to know the mural was there. I know of one aficionado of the murals that gets the post office to put its stamp in the Parisi book by the mural.