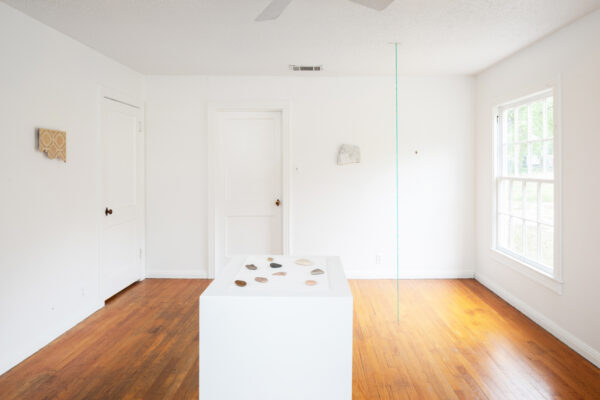 Casting bold light on the mundane, Iva Kinnaird’s new exhibition at F is rich with art historical nods and allusions to popular culture that spring easily from everyday items and the artist’s taxidermic precision. Seemingly spare, the works reward careful viewing with minute details and wry humor that hinges upon the collision of non-traditional media with the annals of Western collecting practices. Installed in the intimate gallery at 4225 Gibson Street, Elizabeth Warren’s Ear revolves spatially around the titular work (a grouping of rocks that themselves encircle and imitate a drawing of the senator’s earlobe), but branches in myriad directions that might initially seem at odds with one another.

Kinnaird spent her summer months ruminating on the space, carefully arranging her sculptures and site-specific pieces so that they take full advantage of raking window light, petite ledges, previous holes in the ceiling, and the inescapably residential atmosphere. To that effect, Filling, a mounted fragment of hand-painted faux linoleum, seems like an homage to the museumification of architectural ruins, but is also one of the most site-specific pieces in the whole exhibition. Cast from a recess of rotting floor in the gallery’s kitchen just one room away, the plaster and masonite replica is raised onto the wall as a captivating curio, a suitable entry point into the competing ideas within Kinnaird’s practice. 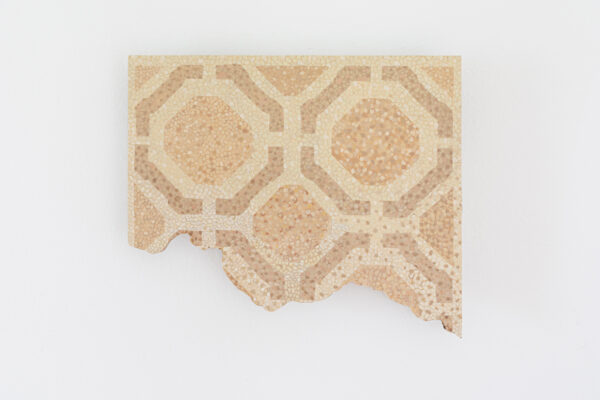 Mining the quotidian, Kinnaird reframes common objects as talismans of art and archaeology. Like found relics of cultural significance, some works exude a falsely historical air that problematizes the way in which viewers observe and re-observe each piece. The stone relief carving titled HOT LESBIAN PUSSY TO PUSSY (2GIRLSHOME) 4:11 is sourced from a pornographic clip on the internet, but looks less like virtual smut than a glyph from an Ancient Greek temple frieze. Besides the requisite marble, the mounting hardware of this latter work is included in the materials list, ensuring that the manner of presentation is part and parcel of the whole. The ease with which Kinnaird traverses centuries and continents with seemingly flippant one-liners speaks not only to her knowledge of the content of museums, but also to the ways in which they have been displayed. 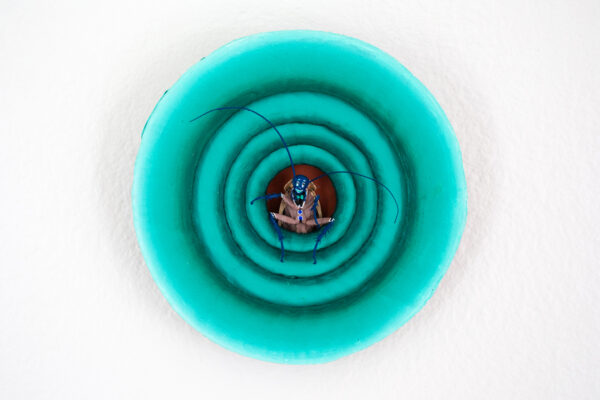 The cockroach and the ibuprofen pill make a number of appearances throughout, and it is their very ubiquity that make them attractive to the eye. Endless Ache, a nod to Constantin Brancusi’s Endless Column series, replaces the theoretically infinite skyward march of oblongs with easy-to-swallow capsules attached end-to-end from floor to ceiling. The Liqui-gels shimmer like improbable jewels, their medicinal turquoise interiors absorbing the natural light from the gallery’s windows and then offering it up again as something more transcendent. In IB Objects, the pills take on geometric configurations that seem more like 3D renderings than anything physical. The liquid contained within each resin-bound composition seems on the verge of leaking out with a subtle adjustment of the thermostat.

On the other hand, the scurrying cockroach — often the harbinger of shrieks, shoes, and large plastic cups- turned traps — becomes comical in Kinnaird’s careful constructions. Like the subjects of an overly judicious undertaker, each insect is painted in startling colors, false eyes added, rainbow patterns delicately applied, and elaborate backdrops created. Like the sad clown with the painted smile, pieces like That’s All Folks! (1953) reference the duality of frivolity and despair with direct allusions to the stuttering Porky Pig and the exploitation of his ailment. 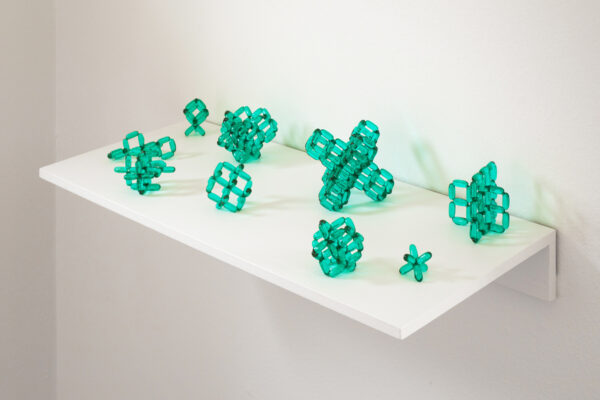 Linking the everyday with the museological, two carved poplar sculptures act as unlikely stars of the exhibition. Both Carved Cockroach and Carved Cockroach (Scarface) vacillate between tchotchke and totem while asking questions about the creation of “authentic” objects and their place within an increasingly globalized society. The stylized antennae of these hand-hewn roach replicas call equally upon both traditional items of Oceania and the giant wooden utensils Midwestern grandparents hung in their kitchen throughout the last half of the twentieth century. So deliberate is Kinnaird’s adoption of this style and so dextrous the carving in low relief that each could easily be taken for a readymade if we didn’t know any better. It is this combination of styles and myriad meanings that make Kinnaird’s exhibition so fruitful. Her ability to turn from academic conceit to hearty chuckle at a moment’s notice keeps the viewer on alert and reinvigorates each work as the full scope is revealed.