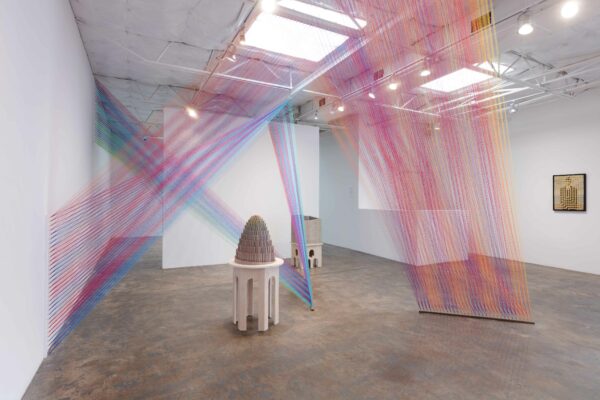 A myth and biblical narrative, The Tower of Babel follows the endeavor of society to build a structure so glorious it could bring them in touch with the heavens. However, when understood as a threat toward God, the single language of humankind was divided, shattering efforts to finish the construction. The myth tells us that unearned glory was the Babylonian’s demise. Artist Gabriel Dawe says their pursuit was an “epic exercise in futility.”

In his solo exhibition Ode to Futility, Dawe washes this ancient story with a modern interpretation, veering away from the long-established understanding of the people as arrogant in their pursuit to raise themselves to a heavenly existence on Earth. He displays gossamer-thin sheets of gold leaf upon numerous jigsaw puzzles, both hanging and built into megalithic towers, and meandering throughout the space is one of the artist’s signature Plexus installations of colored string. The plane of glinting towers at Talley Dunn Gallery is situated within the prismatic illusions of light created by the fibers.

Choreographed to the space so that its perceived structure changes with every step, Dawe beguiles the viewer with the woven site-specific installation. Thin, colored strands of embroidery threaded uniformly stretch between wooden supports on the floor, ceiling, and walls across one-hundred feet in the gallery. Materializing light, he connects individuals to that which is unseen, transitioning everything in the gallery into one ethereal experience. The towers, fraught with their narrative of uncertainty, are swaddled in moments of blissful clarity. 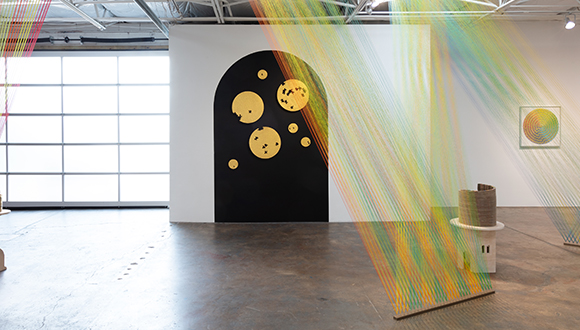 Further stepping away from the dialogue of observable reality in Ode to Futility, Dawe invites exhibit-goers into a golden cosmos contained in two black arches. The portal-like displays pull us into a version of the myth where perhaps the builders were not condemned. Missing No. 30 and several similar circular jigsaw puzzles covered in gold leaf are hung, glimmering on a black surface.

Scintillating throughout the gallery are sculptural towers of precisely stacked cardboard puzzle pieces. The forms are made from layers of jigsaw puzzle pieces produced in the same die cut, and sit upon stylized wooden pedestals with arched doorways and windows. Study no. 7 (with gold leafing), a tower built of golden puzzle pieces, seemingly rises and falls simultaneously. Dawe exhibits several variations of The Tower of Babel in the gallery: walls are tall and short, paths ascend and descend, and stairs cascade steeply and gradually. In a moment, the viewer sees the demise of the society which built the tower, but Dawe ruminates on their pursuit of building, distancing them from being victims of illusions of grandeur. To touch something higher is to see the beauty in fragments, which he reminds us still remain pristine. 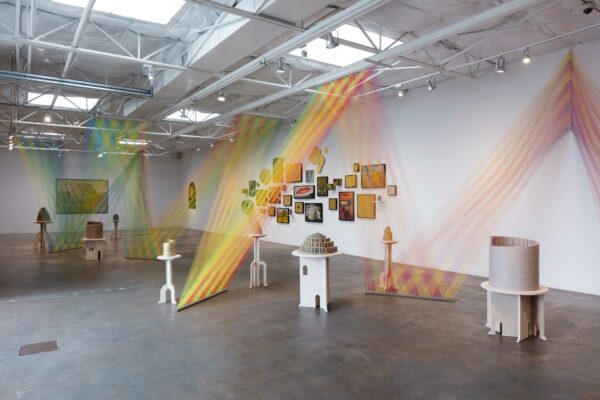 Hanging on opposite walls are puzzles of more than four by six feet of The Tower of Babel by painter Pieter Bruegel the Elder. Golden Path No. 10, hung at the front of the gallery, is complete, fully locked together by the tabs of the puzzle pieces. Upon the works, Dawe lays a gold labyrinth meant to be followed by the eyes, while the puzzle on the far wall remains untouched — only a handful of puzzle pieces missing from the image.

Arranged on a gallery wall, Dawe further reinterprets the ill-fated utopia through various expressions of coveted artworks, such as Van Gogh’s Bedroom in Arles, René Magritte’s The Son of Man, and Sandro Botticelli’s The Birth of Venus. Incomplete puzzles of these as well as master paintings by other artists are hung on a wall, calling into question the meaning of the lost pieces. Without every puzzle piece present, the viewer still knows these images. Dawe continues to pay homage to incomplete work, juxtaposing revered paintings with puzzles he designed, manufactured, and gilded in gold. Ironically written on a small scrap of paper and pinned to the wall, nestled between the gallery of artworks, are the words “all here,” perhaps referencing complete understanding even in futile moments. 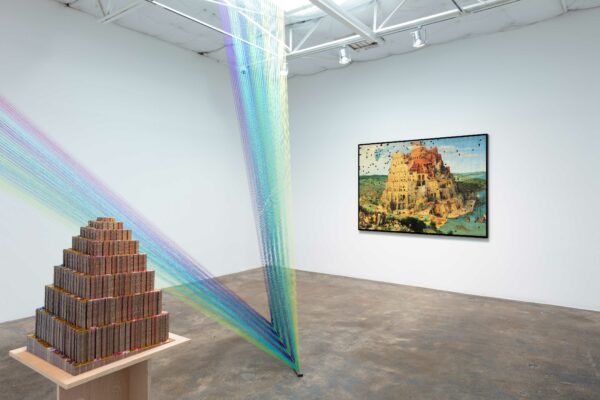 Dawe intertwines opulence with corruption and mystery with myth in this exhibition. His modern understanding of the story of The Tower of Babel leads him to a profoundly personal place, saying, “In my life’s journey, I’ve tirelessly searched inside and outside of myself for answers. I’m not sure I’ve found any, but I’ve come to realize that the most insightful journeys are inwards.” The anthropological towers glinting in the darkness of their demise, incomplete puzzles, and illusions of light illustrate the significance of immateriality. This exhibition is a meditation on the creation of art and exalts the artist, who is considering the value of creation in both existence and absence. 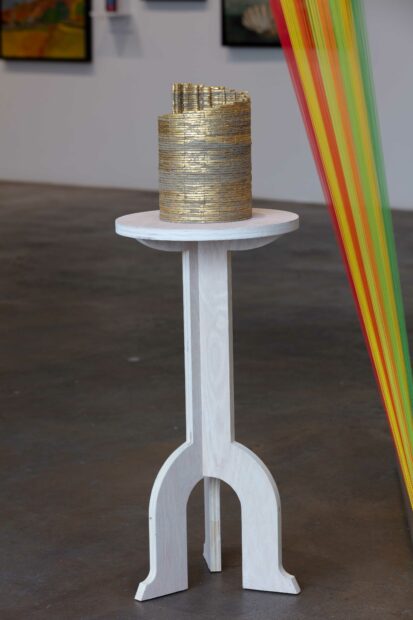 Ode to Futility is on view through December 10 at Talley Dunn Gallery in Dallas.