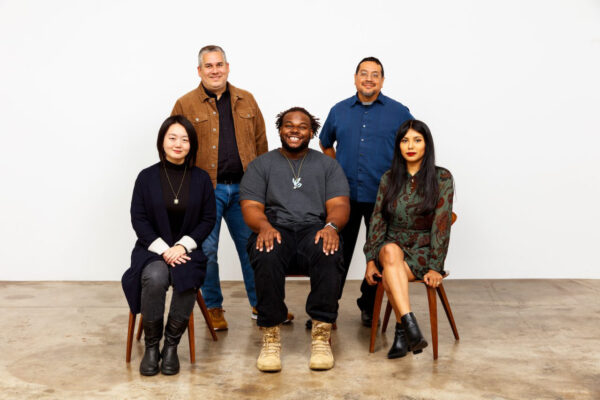 Talley Dunn Gallery, one of Dallas’ most well-known contemporary art galleries, has announced the five recipients for its second annual Equity in the Arts Fellowship. Begun last June as a way to support Black, Indigenous, and other artists of color, the Fellowship is an application-based award for individuals residing in the Greater North Texas area. In a press release announcing this year’s awardees, the gallery reiterated a statement first issued in the initial grant announcement:

Art institutions are complicit in the conscious and unconscious ways artists of color have been denied equal access to resources for success in the arts. These social inequalities can only be remedied with explicit actions to structurally change our unspoken norms. Talley Dunn Gallery acknowledges the social and economic injustices artists of color face and is committed to advancing racial equity through the support of those whose voices are vital in our communities.

The recipients of the 2021-22 award are Martha Elena, Charles Antoine Gray, Juan Negroni, Alex Ordóñez, and Jae-Eun Suh. The artists will receive stipends of $1,000, mentorship from the gallery’s team, and studio visits over the course of the next ten months.

Originally from Cerritos, Mexico, Martha Elena was raised in a bilingual household in Texas’ Rio Grande Valley. She has a BFA from the University of Texas Pan American and now lives in Fort Worth. She had a solo show Solo Solo, at Artspace 111 this past summer. For this exhibit, she converted various texts into Wingdings 3 — a font comprised primarily of arrows — and then made the translated phrases into soft, colorful sculptures. As previously reported by Glasstire, she said of this work that it, “explore[d] the idea of getting lost in translation.”

Charles Antione Gray has exhibited widely around Texas and the west coast, and completed a residency at Atelierhaus Hilmsen, Hilmsen, Germany, in 2014. His 2019 solo exhibit at 500X Gallery in Dallas centered around his mother’s discovery that some of his ancestors may have once been traded for two chickens. He sought to portray his family members not just in the way they were seen, but by showing who they actually were. Gray has also made oil paintings on Pokémon cards. Originally from Fort Worth, he is currently finishing his BFA at the University of Texas at Arlington.

Juan Alberto Negroni is a painter from Bayamón, Puerto Rico who currently teaches at the Episcopal School of Dallas, a private college preparatory school. He has an MFA in Studio Arts from Southern Methodist University in Dallas, an MA Ed in Art History and Museum Studies from Caribbean University Puerto Rico, and a BFA with a Major in Printmaking from Puerto Rico School of Fine Arts and Design. In 2017 he was a part of RESPOND: Puerto Rico, an arts event organized by Southern Methodist University to provide support to Puerto Rico in the wake of Hurricane Maria. According to the Fellowship press release from Talley Dunn Gallery, Negroni works from a background in printmaking to build “bright, abstract compositions that layer patterns and botanical imagery. In a nod to his lower-middleclass upbringing, he often repurposes everyday materials, including shower curtains, tarps, and paper scraps.”

Alex Ordóñez is the cofounder of Colectivo Wajabal, which is, according to Talley Dunn’s release, “a multidisciplinary collective that creates opportunities for learning and dialogue within the Latino community.” He is currently pursuing his MFA in Art with a Studio Art emphasis at Texas A&M University-Commerce and teaching ceramics at Alvin Community College. His practice combines clay with other natural materials like papier-mâché, fabric, and paper to address the otherization of Indigenous populations by Western social scientists. Ordóñez is from the Andes Mountains in Ecuador.

Rounding out the awardees is Jae-Eun Suh, who is currently pursuing an MFA at the University of North Texas in Denton. She was born in Texas, moved to South Korea when she was two, and lived between Seoul and Manosque, France before returning to Texas for college. According to the gallery’s press release, “Suh collects and combines photos and videos of different locations to create abstracted landscapes that connote both place and passage.” Her work has been exhibited internationally.

The fellowship recipients will have a group exhibition at Talley Dunn Gallery in the summer of 2022. For more information, please visit the gallery’s website.

While I applaud the idea of ‘Equity in Arts Fellowship’, I would think a gallery as successful as Talley Dunn could be more equitable. A $1000. Does not go far these days and as much press coverage as the gallery get over this(I assume they actively send out press releases”, they benefit dramatically more than the recipients. Step it up Talley.